Review: THE PURGE: ANARCHY, Incoherent Screams Against The System 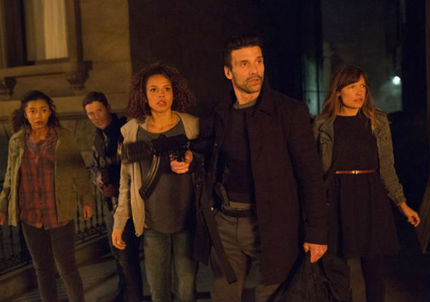 Taking place one year after the events in 2013's The Purge but featuring a new cast of characters, The Purge: Anarchy declines to flesh out its vague premise, once again focusing its energies on a basic instinct: fight or flight.

Whereas the first film contained its action to a single, if spacious, suburban home, the sequel forces its protagonists onto the mean streets of Downtown, Anywhere, U.S.A. Actually, it looks to have been filmed in Los Angeles, but the specific geography matters less than the dark urban setting, which allows for many people of color to display their patriotic spirit by killing each other.

A few new specifics emerge, beginning with the idea that in 2014, the New Founding Fathers of America are elected to power, and sometime thereafter the U.S. government sanctions The Purge, an annual 12-hour period during which all criminal activity, up to and including murder, is permitted, nay, encouraged, with no emergency services provided.

The Purge is credited with lowering the crime rate during the rest of the year and benefiting the country economically, though how, exactly, is left to the imagination. It's suggested strongly that poor people who cannot afford expensive security systems are affected disproportionately, their deaths justifiable because they are not contributing sufficiently to society, in the estimation of the New Founding Fathers.

That's as far into social commentary as writer/director James DeMonaco is willing to go. Frankly, the premise would be easier to swallow were it set another decade or so into the future, but I'm willing to accept that these two movies are set in an alternate universe that greatly resembles Planet Earth as we know it. Making that allowance, however, does not excuse the elementary storytelling that foreshadows every "twist" in explicit detail, thereby sapping any possibility of suspense from the narrative. Nor does it minimize the vapid nature of the dialogue, or the clueless behavior of some of the characters. Nor does it explain away the ham-fisted action sequences that unfold without a spark of excitement, ingenuity, or clarity. 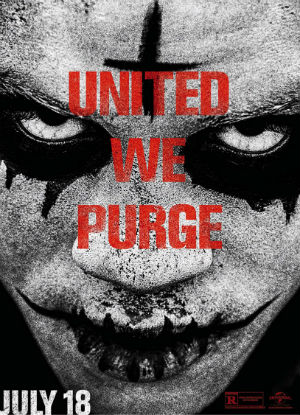 The last point is fatal for a would-be thriller that revolves around its scenes of chase and pursuit. The first movie featured a nuclear family of four; this time, it's a "blended" family. Against his better judgment, an armed man who declines to give his name (Frank Grillo) has come to the aid of a single mother and her teenage daughter (Carmen Ejogo and Zoë Soul), who were under attack by a paramilitary unit. They are joined by a husband and wife (Zach Gilford and Kiele Sanchez), who are under attack by a gang of masked hoodlums.

The armed man becomes surrogate father to the group. As the others astutely note, he's clearly out on the streets with the intention to purge, yet he has a good heart. The others, of course, want to keep him from purging, because that would be "wrong." Meanwhile, caught between the paramilitary group and the masked hoodlums, they must try to survive the night.

Grillo is an assured presence, as he's demonstrated in several dozen roles over the years, and it's a pleasure to watch him take command of his character, a man with evident military or law enforcement training who knows how to deal with incoming fire. The other actors are fine, although their characters are given few notes to play: mother is concerned, teenage daughter is sassy, husband and wife don't get along too well anymore. And other roles occasionally come into play: a dying old man (John Beasley), a fun-loving co-worker (Justina Machado), an internet firebrand (Michael K. Williams).

In The Purge, writer/director DeMonaco conjured up an outlandish premise, but both that film and The Purge: Anarchy fail to deliver anything out of the ordinary as far as their characters or action sequences are concerned, and the ideas remain half-baked. The films want to say something, but when they open their mouths, all I can hear are incoherent screams.

The film opens wide in theatres throughout North America on Friday, July 18.