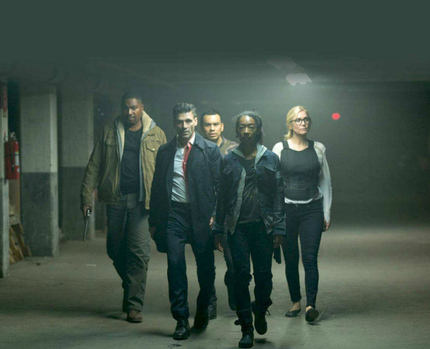 Filled with vim and vigor, The Purge: Election Year works hard to steady its focus as an anti-something thriller.

The first film in the series, The Purge, played on white suburban fears by taking seriously the ridiculous concept that the U.S. has passed a law making all crime legal for 12 hours. It was the sort of "what if?" concept that is easy to grasp, impossible to accept, and yet fascinating to contemplate, especially in a country where gun violence is rampant. The sequel, The Purge: Anarchy, brought the action to an urban setting, expanding its potential action setups and introducing a more diverse group of potential victims, as well as Frank Grillo as Leo Barnes, a sympathetically angry leading man.

The third installment adds the idea of political fury into the mix. The original "purge" legislation was pushed through by a group calling itself the New Founding Fathers of America (NFFA). With a new election looming, and now facing opposition in the person of independent presidential candidate Senator Charlene 'Charlie' Roan (Elizabeth Mitchell) -- herself the survivor of a Purge attack in which her family was killed --the NFFA decides to kill her.

Ah, but what the NFFA doesn't realize is that Leo is a resourceful man with a tough hide who has decided he doesn't like the Purge either. (See The Purge: Anarchy to learn why.) As head of security for Charlie, he teams up with a diverse group of minorities to keep Charlie alive so she can win the election.

James DeMonaco, who has written and directed all three installments of the series, also counts among his credits The Negotiator (as cowriter) and Assault on Precint 13 (as remake scripter). His scripts may not be elegant, but they are direct to a point. For his latest variation on a theme, he adds much more intentional humor, much of it coming from the mouth of Mykelti Williamson, who plays the owner of a small convenience store in the city. Naturally, he wants to defend his business, but he's also a practical man with values, so when Leo and Charlie come knocking at his door, he's ready to help out and reorder his priorities. 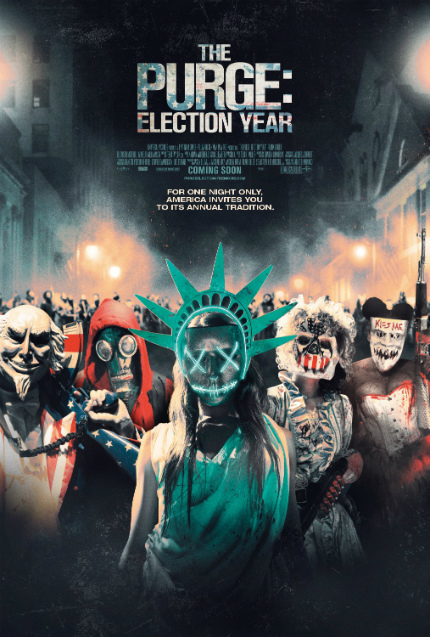 For this edition, DeMonaco has created a string of characters like the store owner, people who are ready to take up arms in opposition to the Purge, and don't hesitate to blow the bad guys away, no matter their age or sex. The opposition team includes Edwin Hodge, who I believe is the only cast member in all three films to date; his character has steadily grown in importance and leadership skills to the point that he is now a major player in the political schemes that are afoot.

Most of all, The Purge: Election Year is an action movie. As director, DeMonaco is a rudimentary sort when it comes to the action sequences. What helps quite a bit, though, is that the pace rarely slackens, thanks to the contributions of editor Todd E. Miller, and that, in combination with the overall lighter tone, makes the movie more entertaining that the previous installment. This is much less a horror film, which The Purge felt like at times, and more like a mainstream thriller, albeit with more blood.

Considering its title, The Purge: Election Year fails to deliver much in the way of political insight -- its themes are explored in similar rudimentary fashion as the action -- but it keeps moving and keeps killing. In itself, that may be a repudiation of Charlie's campaign against the Purge, which comes down to 'less murder, more peace,' but the violence feels more gentle than in the first two films.

Perhaps that's a reflection of how repeated violence tends to tamp down realistic reactions. Or maybe it's just a reaction to a decently-made movie that modestly exceeds expectations.

The film opens wide in theaters throughout North America on Friday, July 1.