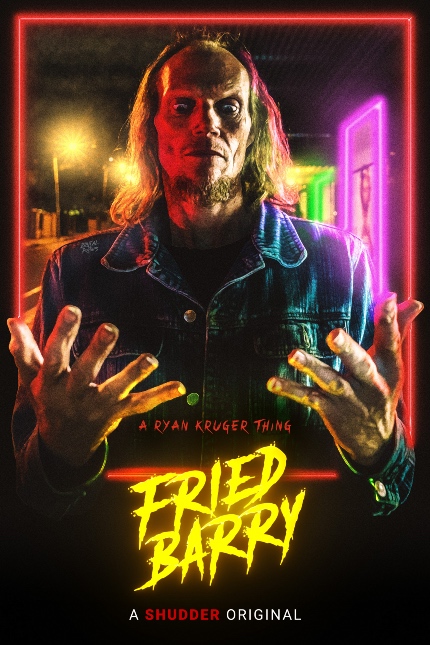 My fok, Marelize! What a weird, wild, and wonderful road-trip through the psycho-delic-gorgiastic-extra-terror-restrial-killer-eidoscope of Fried Barry's human reconditioning. And if that motley and manic description doesn't pique your cinesense, then this film may not be to your tastes.

It's an erratic fever dream through Barry's misadventures as a junky-turned-alien, and a brilliant first feature by director/writer Ryan Kruger. Executed with style and no small measure of audacity, it's unlike anything I've ever seen out of South Africa, and surely puts Kruger squarely amidst the country's new generation of riveting filmmakers.

For all the credit due behind the camera, including to Haezer for his sublime music (if "music" is what you can call the panoply of aural sensations that accompany Barry's experiences), the film hangs on Gary Green's extraordinary leading performance. He is essential and outstanding as Barry, in ways reminiscent of Nicolas Cage in Mandy, and indeed the whole vibe of Fried Barry left me thinking of Panos Cosmatos (director of Mandy) more than once.

While this appears to be Kruger's first feature, he has a trail of fantastic shorts and music videos in his wake, including the original three-minute experimental film that spawned this feature (also starring Gary Green, and also called Fried Barry). In hindsight, the feature's rapidfire episodic structure makes fantastic use of Kruger's short-form experience, while working perfectly for the cadence of a frenzied alien tour through the human condition.

And when I say frenzied, I really mean it; at one point, I caught my breath, and so much madness had happened I felt for sure the film must be entering its final act, only to see I was just 30 minutes in. The remaining hour and some change was similarly evanescent, and while this tempo may not work for everyone, it for damn sure worked for me.

In fact, this structure and style reminded me another great film, Fear and Loathing in Las Vegas. And as it was for Terry Gilliam then, the format here allows Kruger to parade a host of juicy cameos, and Fried Barry is bursting at the seams with scene-stealing moments by a who's who of South African talent.

This film would be worth watching purely for the highlight reel of supporting performances, but the fact that I'm talking about Mandy and Fear and Loathing in the same breath as Fried Barry should tell you all you need to know. If that pairing sounds like a match made in heaven ... get the deep-frier, batter the dynamite, and light the fuse.

You will not be disappointed.

The film enjoyed its Canadian premiere at Fantasia 2020, which is when this review was originally published. Fried Barry is now streaming on Shudder.

Do you feel this content is inappropriate or infringes upon your rights? Click here to report it, or see our DMCA policy.
Brett WilliamsChanelle de JagerGary GreenJoey CramerRyan KrugerShudderSouth Africa