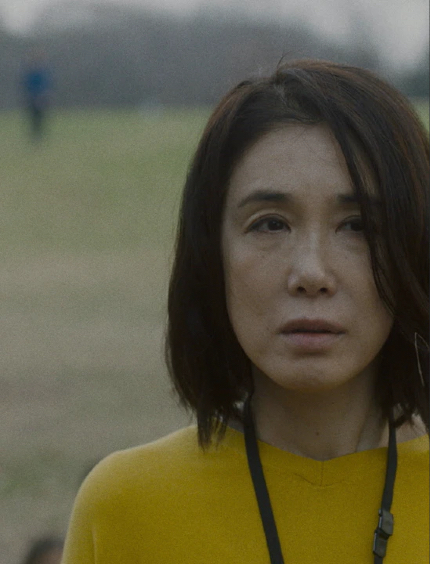 A Girl Missing, the English-language title of Fukada Kôji's follow-up to 2016’s well-received Harmonium, is something of a misnomer or feint.

While a girl, a teenage girl, does go missing in A Girl Missing, she reappears a week later, physically, if not emotionally or mentally, unharmed, the victim of an impromptu kidnapping by Tatsuo (Sudo Ren), the introverted nephew of Fukada’s central character, Shirakawa Ichiko  (Tsutsui Mariko), giving a multi-layered, nuanced performance), a middle-aged, home-care nurse and the kidnapped girl’s occasional tutor.

Less a suspense drama or mystery thriller, A Girl Missing unfolds as an oblique, elliptical character study, a complex, often contradictory exploration of the devastating consequences of Ichiko’s relationship with Tatsuo, the kidnapped girl’s family, and Ichiko’s seemingly isolated decision to keep her connection to Tatsuo a secret from the kidnapped girl’s family or everyone else around her.

When we first meet Ichiko, however, she’s living under an assumed name, Uchida Risa, awkwardly flirting with her hairdresser, Yoneda Kazumichi (Ikematsu Sosuke), and living in an isolated flat devoid of furniture. She’s turned voyeur, peering through the window at Kazumichi and his girlfriend, Motoko (Ichikawa Mikako), the kidnapped girl’s older sister and a onetime friend or acquaintance of Ichiko’s from her former, abruptly canceled life.

Fukada frames Ichiko primarily in medium shot, keeping a respectful, if inquisitive distance, from Ichiko and the hints of a troubled inner life that’s led her to change her identity and quite possibly turn vengeful stalker. But Fukada introduces expectations ― like Ichiko’s stalking or a disturbing incident where she leaves her apartment on all fours barking like a feral dog ― only to immediately subvert them, embracing a level of deliberate ambiguity and obfuscation likely to leave audiences unsatisfied, if not outright perplexed by Fukada’s unconventional decisions as a filmmaker.

A Girl Missing shifts between two different time periods, the events immediately leading to and from the kidnapping and Ichiko’s new, unstable life two years later. Before the kidnapping, Ichiko seems to find fulfillment in her work as a home-care nurse to an ailing local artist, Tôko Oishi (Ohkata Hisako), and mentoring Motoko and Motoko’s younger sister (and future kidnap victim), Saki (Ogawa Miyu).

Respected at work and engaged to Dr. Totsuka (Fukikoshi Mitsuru), Ichiko’s intertwined professional and personal lives give her a measure of stability. Post-kidnapping, Ichiko’s life begins to unravel, initially because, taking Motoko’s advice, she fails to disclose her relationship to Motoko and Saki’s mother, later when Motoko, harboring a borderline obsessive crush on Ichiko, reveals a story Ichiko shared during a daytime visit to the local zoo. Once the local tabloids discover Ichiko’s connections to kidnapper and victim alike, the future Ichiko envisioned for herself becomes a near impossibility.

The Ichiko-as-Risa we meet later in the film seems obsessed with revenge, though whatever awkward plan she’s conjured over the last two years seems vague and ill-formed, dependent on ingratiating herself with Motoko’s boyfriend and ruining an already fragile relationship.

Fukada readily understands the personality-warping or -destroying effects inherent in seeking vengeance for real or perceived wrongs, but he’s less interested in the narrative mechanics or the cathartic violence typically associated with revenge thrillers or dramas than the deleterious effects on character and personality or the revelation of a character’s repressed personality. With social strictures and invisible norms defining who and what Ichiko can or should be, once she violates those strictures and norms, she’s also free (or freer) to follow a course more closely aligned with long-suppressed desires.

That Ichiko repeatedly misses the clues underlying Motoko’s erratic behavior (i.e., her unspoken desire for Ichiko) says as much about Ichiko and a society-conforming willful ignorance or blindness than it does about Motoko and a repressive environment that doesn’t allow Motoko to fully embrace her sexual identity. On at least that level, A Girl Missing serves as a social critique and a more personalized critique of a certain personality type (Ichiko’s) that embraces social norms more out of convenience and comfort than their rightness or correctness.

Fukada, however, prefers to let audiences find their way to that conclusion ― if that conclusion was, in fact, intended ― rather than spell it out for them. Relying on an interstitial, attenuated approach to storytelling, with all the pleasures and frustrations that implies, allows Fukada to give himself what Ichiko quietly, desperately needs: The freedom to express himself.

Originally published during the film's U.S. theatrical release in July 2020. The film is now streaming on The Criterion Channel.

Do you feel this content is inappropriate or infringes upon your rights? Click here to report it, or see our DMCA policy.
CriterionFranceIchikawa MikakoIkematsu SôsukeJapanThe Criterion ChannelTsutsui Mariko

More about A Girl Missing