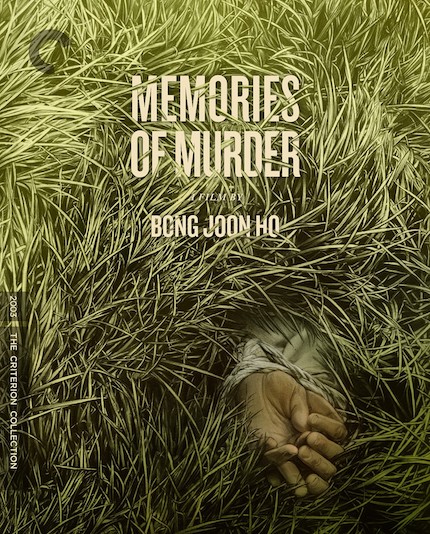 This week, the Criterion Collection released Bong Joon-Ho's (Parasite, The Host) Memories of Murder in North America on double-disc Blu-ray and DVD. This film was the Oscar-winner's second feature, and was a huge breakout for him, having topped the South Korean box office in 2003, and (I think) remains one of the country's highest-grossing films of all time.

It's easy to see why. Bong's excellent direction and script, combined with the public's seemingly endless lust for true crime stories, made Memories of Murder a sure-fire hit. Starting in 1986, this period piece (the film came out in 2003) follows a group of small-town detectives that are definitely over their heads when the bodies of ravaged women start piling up. All were wearing red, all were murdered while it was raining, and later on, we learn that a specific song was requested via postcard at the nearest radio station.

The film is a portrait of hyper-toxic '80s masculinity in how these detectives view themselves, their jobs, and the one policewoman they work with, belittling her with jokes about how many mystery novels she's read, when in fact, she's more capable and reasonable than most of them (shocker).

These men are not above planting evidence and framing a special-needs character in order to celebrate themselves. It's not long before they're proved incredibly wrong by not only the detective sent in from Seoul, but also by more corpses appearing.

I don't want to spoil this nearly-20-year-old-film, but I will say that Memories of Murder is just as engrossing as it was when I saw it here in the States at a Landmark Theatre --- if not more so due to my own experience and the knowledge that comes with the passing of time. It's a seriously great crime film that I hope more cinephiles check out sooner than later. The darkly comedic and satirical elements Bong has infused also makes Memories of Murder a winner.

The new 4K restoration from the Korean Film Archive was not as impressive as some. The film footage that was shot (actual celluloid) was processed with a bleach bypass, meaning that the production sidestepped the usual process of a bleach bath in order to achieve a desaturated, grim look to the film. That certainly occurred, as the movie looks as serious as the premise of detectives tracking down their country's first serial killer. [For a real "killer" double feature, pair Memories of Murder with David Fincher's Zodiac, which I wouldn't doubt was influenced by Bong's film.]

However, to my eyes, this transfer looks grainy with flickering in a few scenes, and some of the blacks are crushed in others. It is a dark film in every sense of the word, by intention. Do we need to see everything clearly? It's best if we don't, following the adage of "what you don't see is scarier," but I would have liked more definition in those scenes. The coloring has been rendered more green than a previous Blu-ray release, and that's understandable in terms of tone and mood.

However, the sound holds up very well, and I consider Memories of Murder to be a masterpiece, and this release still holds a very high recommendation from me. I loved the included video essay on sound in Bong's films from film scholar Jeff Smith, too. That kind of analysis is revelatory for those studying films.

Bong's 1994 student film Incoherence was included in this release, and that was fun to watch, as we don't often get to see the very beginnings of master filmmakers. And the gorgeous illustration from Greg Ruth is evocative and simply so well done. Plus, listening to director commentary over deleted scenes usually reveals needed truths into the process of filmmaking.

It's always a joy to see and hear Guillermo del Toro speak and share his wisdom about a film, and we're treated to his insights in the special features. There's an extensive, feature documentary about the making of Memories of Murder, which is a bit on the dry side, but very informative nonetheless. It was of course great to hear Bong speak about the real-life case that inspired this film, and his thoughts on that and when they caught the actual serial killer, believed to be Korea's first.

Ed Park's essay in the included mini-fold out/insert is great, and you can it read on Criterion's site here.

To add this impressive film to your home collection (DO IT), head to Criterion's page for Memories of Murder here.

More about Memories of Murder