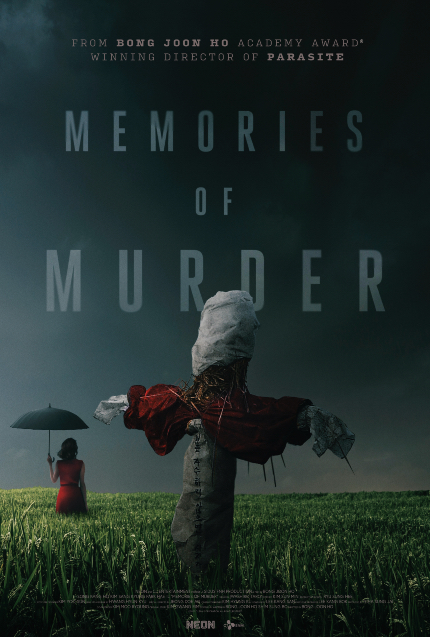 Seventeen years after its release, I just finished watching the best movie of the year.

Memories of Murder
The film is available from Neon on a wide variety of Video On Demand platforms, as of today (Tuesday, October 27, 2020). Visit the official site for details.

Six months ago, I wrote about Barking Dogs Never Die, acknowledging that I had missed both that film and director Bong Joon Ho's followup, Memories of Murder, before being baptized into his swirling works of wondrous genre mash-ups with The Host in 2006, and becoming a respectful follower of his ever since.

Now Memories of Murder has been remastered and it looks gorgeous, though I admit that I am not in any kind of position to judge. Still, it looks wonderful from a visual standpoint, cast in the soft hues of the 1980s -- the film begins in 1986 -- and featuring great performances from Song Kang Ho, Kim Sang Kyung, and Park Hae Il.

Several of my ScreenAnarchy colleagues have praised Memories of Murder highly, and so I entered with a degree of apprehension: could it live up to expectations that I'd been hearing about for more than 15 years?

My answer is: yes. As with all of Bong Joon Ho's films, however, the complexities of the shifting horror, jaundiced humor, deft poignance, and depth of character do not present themselves in the first few minutes, and I didn't start to feel its full impact until the final credits began to roll.

So I want to watch it again, which I will do before my 48-hour rental period expires. The film is available for rent or purchase right now and is sufficiently dark to fit the mood of the "holiday" season (for those who celebrate Halloween), and more than disturbing to affect and/or unsettle those who do not.

Do you feel this content is inappropriate or infringes upon your rights? Click here to report it, or see our DMCA policy.
Bong Joon HoKoreaSouth Korea

More about Memories of Murder