Now On 4K UHD Blu-ray: TRAIN TO BUSAN PRESENTS: PENINSULA Is Weightless, Vapid, and Violent; But It Is Pretty. 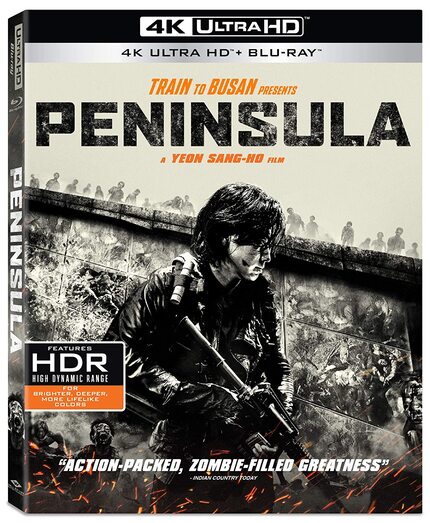 Director Yeon Sang-ho took the genre film world by storm in 2016 with Train to Busan, his debut live action feature after a pair of critically acclaimed animated films (The Fake, The King of Pigs). After its world premiere at the Cannes Film Festival, Train to Busan made the rounds of the festival circuit before becoming a rousing success among horror fans around the world with its high octane action and a deeply resonant story of a man attempting to protect his daughter from an oncoming horde of zombies aboard the titular train.

Yeon follows that massive success with Train to Busan Presents: Peninsula (an unnecessarily unwieldy title), which picks up in the aftermath of the original's apocalyptic plague. Four years later, the Korean peninsula remains untouchable to the rest of the world, still overrun by zombies, and charred nearly beyond recognition as the government has clearly tried and failed to subdue the threat numerous times. However, survivors remain and while some of them have carved out their own unique niches, others are still trying to get out of Korea to safety, despite the rest of the world seeming to have left them all for dead.

Peninsula follows a number of different stories that frequently criss cross, but never really come together as a cohesive unit, eschewing the tight focus of its predecessor in favor of a wildly uneven Thunderdome/Doomsday-esque post-apocalyptic survival adventure that lacks a solid emotional core. One moment we're following smugglers, then a family trying to get out, then there's a zombie/human gladiatorial arena in a mall, a bunch of car chases, etc, etc... It's a film full of sound and fury, signifying nothing.

In the interest of beefing up the production and attempting to imagine a Korea devastated by four years of infestation, Yeon and his team are forced to employ heaping helpings of barely passable CG in lieu of actual physical performers/props. Where Train to Busan was ble to make the threat visceral and palpable by containing it to a high speed train with real actors playing the creatures, Peninsula replaces that threat with numerous CG car chases and zombies. Cars are constantly careening through CG streets, whipping into CG monsters who fly through the air but never feel real. It's incredibly disappointing, and probably one of the weakest points of an already unfocused films.

Mel Valentin saw the film earlier this year and had similar thoughts:

Well Go USA recently release Peninsula on 4K UHD and standard Blu-ray and we were given an opportunity to review the 4K disc. For all its faults, Peninsula looking frequently stellar in the new format, with the disc's HDR grading providing exceptional color depth and the film's digital origins lending themselves nicely to UHD. Fine detail is exceptional, black levels are impressive, and the color palette - which leans heavily toward blues and yellows - seems faithfully recreated. I watched with the Korean Dolby TrueHD 7.1 mix on and was quite impressed with the separation provided during action sequences, though the dialogue through the center channel frequently seemed to be mixed a bit low in comparison to the ambient sounds.

As is typical with comtemporary Asian releases, the disc is quite slim on supplemental material. There are none on the 4K disc, but the Blu-ray contains about 10 minutes of interviews, all gleaned from the same junket and not really illuminating much about the project.

Technically, it's a solid disc, and if you're a completist who loved Train to Busan, you should probably have Peninsula in your collection. However, this venture is far from the success of its antecedent, so I wouldn't go out of my way to seek it out.

Do you feel this content is inappropriate or infringes upon your rights? Click here to report it, or see our DMCA policy.
Sang-ho YeonRyu Yong-jaeDong-won GangJung-hyun LeeRe LeeHae-hyo KwonActionHorrorThriller