Andrew Mack
Editor, News; Toronto, Canada (@Mack_SAnarchy)
Tweet Post Submit
The countdown goes on to the happiest day of the year for horror fans, and our friends at Shudder have been doing their part to make sure that your Halloween season is the best it can be in our current climate.
Firm believers in 'no' good things must come to pass its Halloween all year round and the good times keep on coming next month. November will see the arrival of Australian war era Horror flick Blood Vessel, Korean supernatural horror Lingering, Alexandre O Philippe's doc Leap of Faith: William Friedkin on The Exorcist, indie horror Porno and for lovers of the classics a collection of Mario Bava's films: A Bay of Blood, Black Sabbath, Black Sunday, The Girl Who Knew Too Much, KIll Baby Kill, Lisa and the Devil, Shock and The Whip and The Body.
All of the films in programmed in November are featured in the gallery below. Everything will play in the U.S. and there are notes where they will also be available up here in Canada and over in the UK and down in ANZ.

Halloween is nearly upon us! On Tuesday, we debuted The Boulet Brothers’ Dragula: Resurrection, this Friday we’ll premiere Joe Bob’s Halloween Hideaway and next Thursday brings A Creepshow Animated Special. And we have at least one more October surprise still to come next week.
But even as we wind down our 61 Days of Halloween, we’ve scheduled a killer November to keep you screaming straight through to Thanksgiving. We’re featuring vampires (the Shudder Exclusive Blood Vessel and the Stephen King classic Salem’s Lot), haunted hotels and possessed theaters (the Shudder Original Lingering and Shudder Exclusive Porno), filmmaking icons (the Shudder Original doc Leap of Faith: William Friedkin on The Exorcist and a new Mario Bava collection) and much more. See below and attached for details. 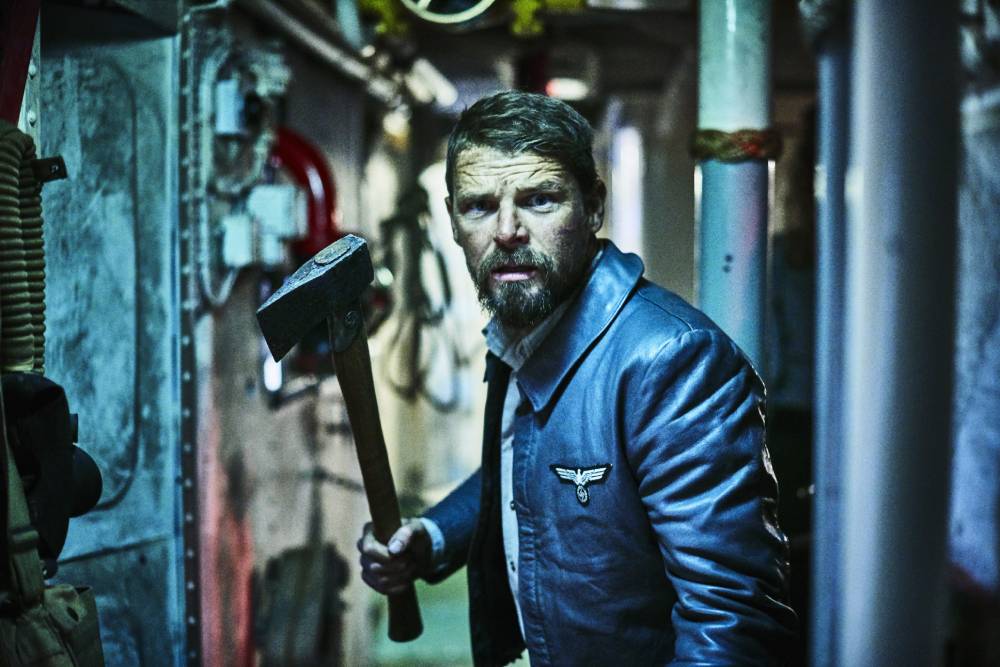 Somewhere in the North Atlantic, late 1945, a life raft adrift at sea, and in it, the survivors of a torpedoed hospital ship. With no food, water, or shelter, all seems lost until a seemingly abandoned German minesweeper drifts ominously towards them, giving them one last chance at survival—if they can survive the bloodthirsty monsters on board. Starring Nathan Phillips (Wolf Creek), Alyssa Sutherland (Vikings), Robert Taylor (Longmire), directed by Justin Dix (Crawlspace). A SHUDDER EXCLUSIVE. (Also available on Shudder Canada and Shudder UK) 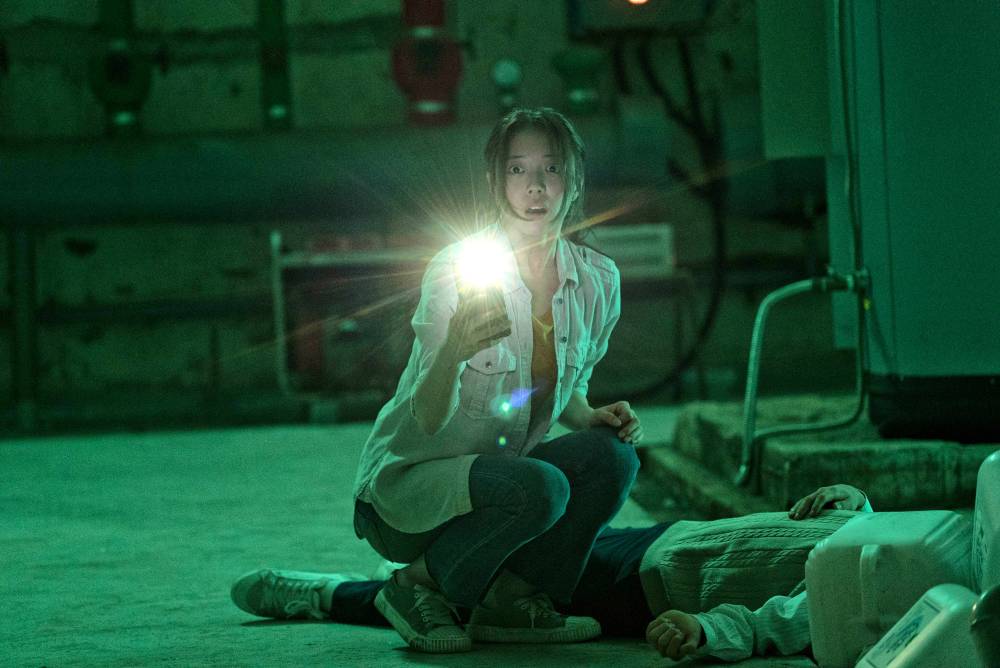 Seeking support as the guardian of her younger brother, Yoo-mi returns to a small hotel run by a family friend. As bizarre incidents creep up in her mother’s old room, Yoo-mi will have to unravel the supernatural mystery and discover the truth before it’s too late. Starring Lee Se-young (Memorist), Park ji-young (The Concubine), directed by Yoon Eun-kyoung. A SHUDDER ORIGINAL. (Also available on Shudder Canada, Shudder UK and Shudder ANZ) 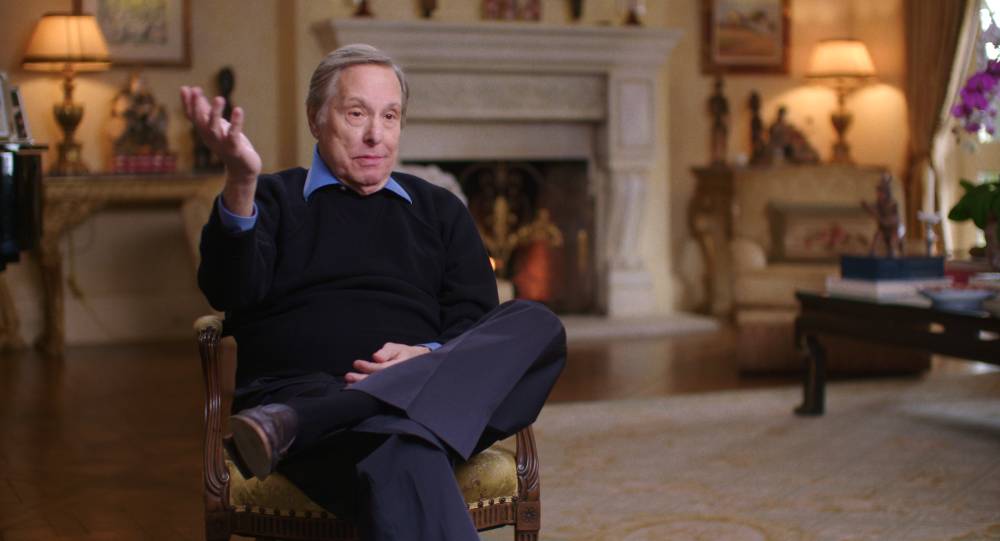 LEAP OF FAITH: WILLIAM FRIEDKIN ON THE EXORCIST — November 19

A lyrical and spiritual cinematic essay on The Exorcist, Leap of Faith explores the uncharted depths of William Friedkin’s mind’s eye, the nuances of his filmmaking process, and the mysteries of faith and fate that have shaped his life and filmography. The film marks the sixth feature documentary from Philippe (78/52, Memory: The Origins of Alien), continuing his thoughtful analysis of iconic genre films. Starring William Friedkin. Directed by Alexandre O. Philippe. A SHUDDER ORIGINAL. (Also available on Shudder Canada, Shudder UK and Shudder ANZ) 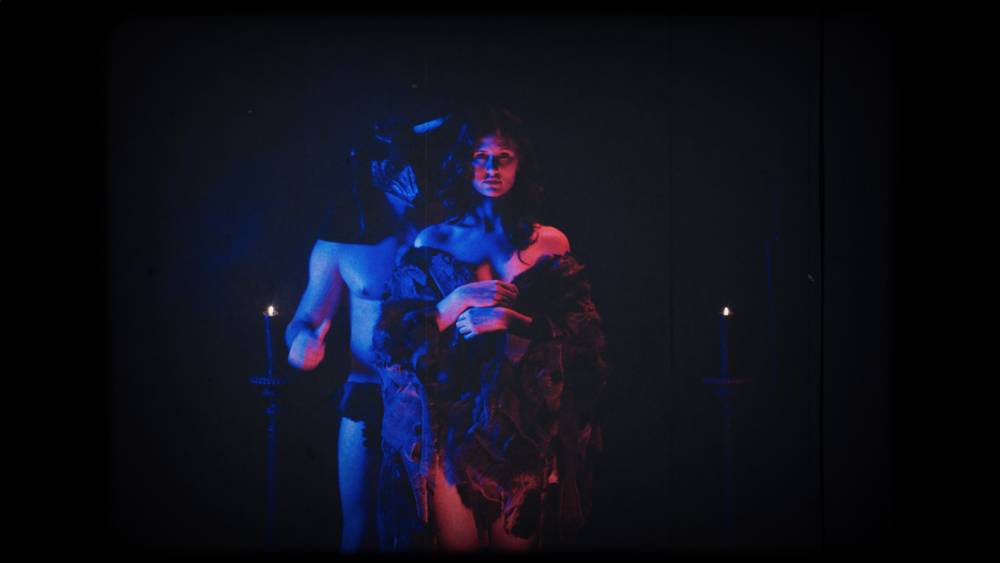 When five repressed teen employees at a local movie theatre in a small Christian town discover a mysterious old film hidden in its basement, they unleash an alluring demon that is determined to give them a sex education...written in blood. Starring Robbie Tann, Katelyn Pearce, Evan Daves, Larry Saperstein (High School Musical: The Musical series), Jillian Mueller (The Last O.G.), Glen Stott (The Good Fight), directed by Keola Racela (Above the Sea). A SHUDDER EXCLUSIVE. (Also available on Shudder Canada and Shudder UK)

A master of Gothic, a genius of giallo and a Godfather of Italian Horror—Shudder celebrates the legacy and influence of Mario Bava with a collection spanning his first foray into fright, Black Sunday to his final gem, Shock.

Featuring: A Bay of Blood, Black Sabbath, Black Sunday, The Girl Who Knew Too Much, KIll Baby Kill, Lisa and the Devil, Shock and The Whip and The Body 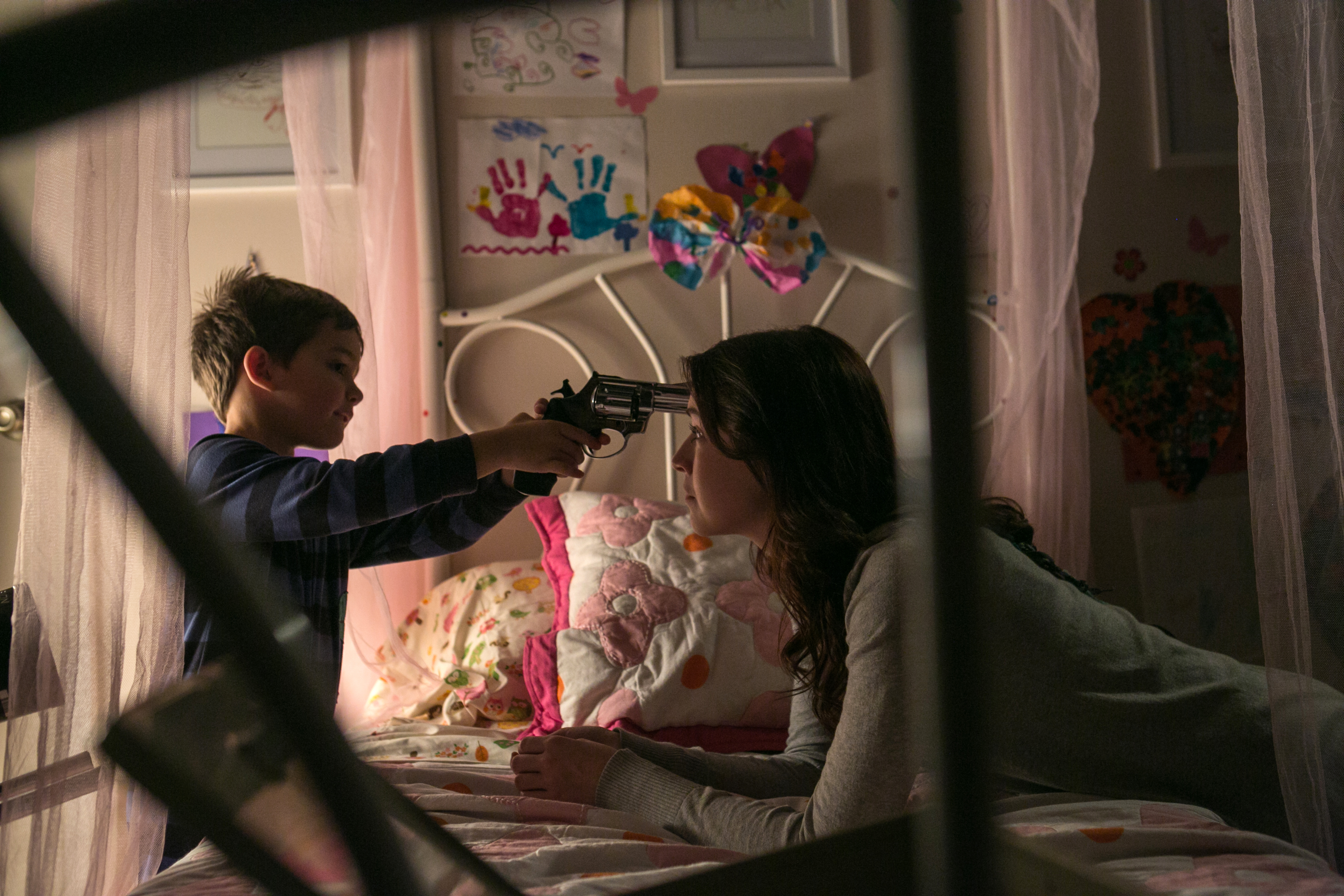 As their parents head out for a date in the city, the three young Thompson children – Jacob, Christopher and Sally – immediately take to their new babysitter Anna, who seems like a dream come true: she’s sweet, fun, and lets them do things that break all of their parents’ rules. But as the night creeps along and Anna’s interactions with them take on a more sinister tone, the kids slowly realize that their caretaker may not be who she claims to be. Soon it’s up to big brother Jacob to protect his siblings from the increasingly nefarious intentions of a very disturbed woman whose weapon is trust, and whose target is innocence. Starring Sarah Bolger, Joshua Rush, Carly Adams. (Also available on Shudder Canada)

Driven by inner forces even he cannot understand, novelist Ben Mears returns to his hometown to write about a mysterious mansion that has intrigued him since childhood. But he discovers a horrifying secret: The community is slowly becoming a village of vampires. Starring David Soul, James Mason, Bonnie Bedelia

Dr. Wexler, professor of American Folklore, states that urban legends exist only to convey hidden moral lessons for all who hear them. But the students at New England's Pendleton College are finding out just how fatal these stories can really be. When a series of murders occurs at the school, student Natalie begins to notice a bizarre link between the killings. Starring Jared Leto, Alicia Witt, Rebecca Gayheart, Robert Englund 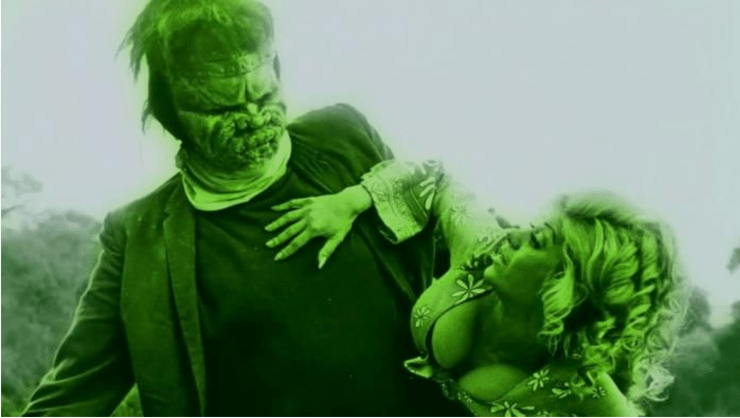 “Horror Film Director Found Slain, Buried Under Floor,” screamed the 1995 headlines read ‘round the world. But the truth behind the wild life of Al Adamson—including the making of his low budget classics and his grisly death—reveals perhaps the most bizarre career in Hollywood history, as retold in this captivating documentary. Featuring Al Adamson, John 'Bud' Cardos, Robert Dix, Marilyn Joi, Gary Kent (Also available on Shudder Canada)

After learning dad’s leukemia has advanced, Faith is stunned when her teacher approaches her with a devilish deal. If Faith gets pregnant and hands the baby over for a sacrifice, the sorceress will heal poor papa. But there’s always a catch, and when Faith realizes what she’s actually agreed to, the sweet deal goes sour very fast. David Keating’s follow-up to Shudder favorite Wake Wood. Starring Anna Walton, Naomi Battrick, Sam Hazeldine. (Also available on Shudder Canada) 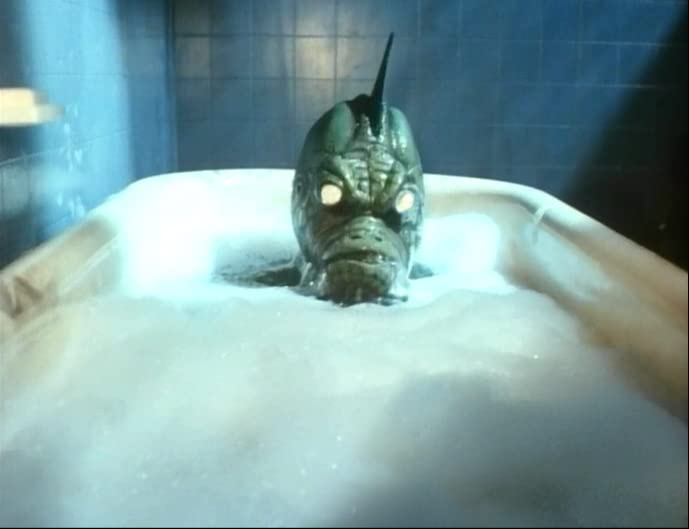 In this horror comedy, John and Mary can't believe their good fortune when they inherit the vast estate of John's recently departed uncle. Sure, it's a fixer-upper. But there's nothing that can't be taken care of with a fresh coat of paint, a little dusting ... and maybe an exorcist! Monsters, mayhem, and mirth descend upon the house and only a mysterious book can save this everyday normal family from Saturday's paranormal activity. Starring Richard Benjamin, Paula Prentiss, Jeffrey Tambor (Also available on Shudder Canada) 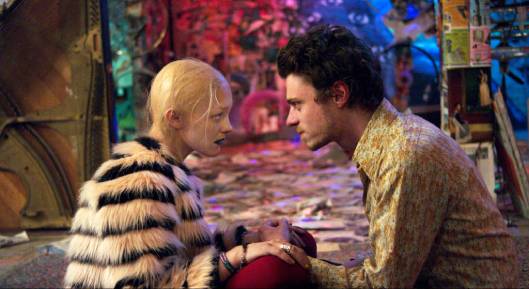 ARE WE NOT CATS? (Director: Xander Robin)

After losing his job, girlfriend, and home in a single day, a desperate thirty-something accepts a delivery job upstate. There he stumbles upon Anya, a beguiling and mysterious young artist who shares his proclivity for eating human hair. While their shared obsession bonds these two loners together, it also takes them on a perverse and disturbing journey in one of the most exciting and singular American indies of recent years. Starring Michael Nicholson, Chelsea Lopez, Michael Godere. (Also available on Shudder Canada)

Rookie detective Shuichi Hioka is assigned to the East Kurehara precinct’s Second Investigation Division, which boasts the best arrest rate in the Hiroshima Prefectural Police. He and his new partner Shogo Ogami, a veteran detective rumored to be in cahoots with the mob, are tasked with investigating the disappearance of an employee of Kurehara Finance, a front company for the Kakomura-gumi organized crime group. Starring Koji Yakusho, Tori Matsuzaka. (Also available on Shudder Canada, UK and ANZ)

Belgian filmmakers Hélène Cattet and Bruno Forzani trade in the crushed velvet and creeping shadows of their giallo-worshiping first two films (Amer, The Strange Color of Your Body’s Tears) for blistering sun, creaking leather and raining bullets in this glorious homage to 1970s Italian crime films. Based on a classic pulp novel by Jean-Patrick Manchette and featuring vintage music cues by Ennio Morricone, Let the Corpses Tan is a deliriously stylish, cinematic fever dream that will slamfire your senses like buckshot to the brain. Starring Elina Lowensohn, Stephane Ferrara, Bernie Bonvoisin (Also available on Shudder Canada)

More about Leap of Faith: William Friedkin on THE EXORCIST