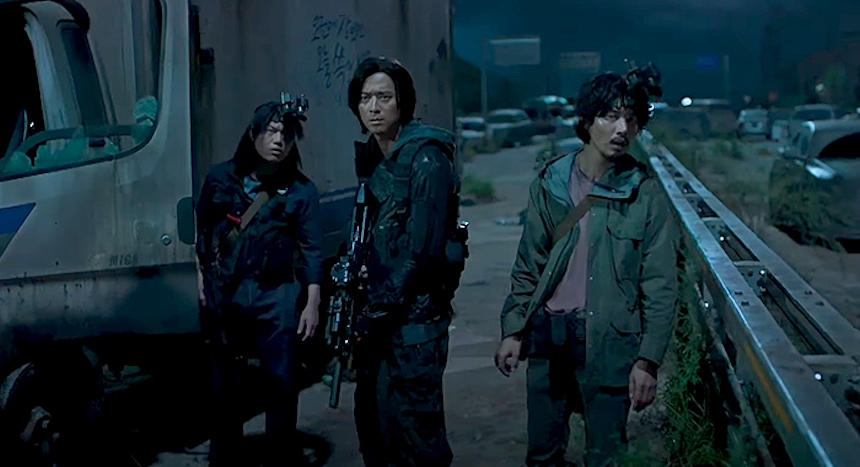 Co-written and directed by Train to Busan’s Yeon Sang-ho, Train to Busan Presents: Peninsula swaps out the cramped, claustrophobic, panic-inducing train setting of its justifiably well-received predecessor, for bigger-budgeted mock or faux-wannabe blockbuster territory, expanding to the entirety of the South Korean peninsula. The country is abandoned by inept or corrupt political leaders after a biologically engineered virus escapes a government lab and overruns South Korea, forcing the outside world to eliminate all contact (i.e., a quarantine or blockade by another name). Featuring smudgy, murky visuals and under-rendered haphazardly realized visual effects, poorly motivated, one-dimensional characters and a slapdash screenplay stitched together from far better ― and obviously, far more original ― science-fiction and horror entries like Escape from New York, Mad Max, and World War Z (among many, many others), Peninsula represents a disappointing step backward for both filmmaker and genre alike.

Hundreds, if not thousands or even hundreds of thousands of CGI zombies gave their mangled, digital bodies so that Peninsula could come to virtual life. Unfortunately, minus the CGI zombies falling to rapid machine-gun fire, thrashed by sedans, SUVs, and vans, and otherwise tossed into the air like rag dolls, there’s little to recommend Peninsula on the character side of the ledger, though Yeon apparently did his level best to make Jung-Seok (Gang Dong-Won), an officer in the now-defunct South Koreans forces, the emotional center. Given a backstory involving loss, guilt, and grief, Jung-Seok spends most of Peninsula’s running time in a complete and utter funk, only awakening from his self-imposed stupor when hordes of CGI zombies or their human counterparts get too close and pose an immediate danger to him and his compatriots in crime and/or survival.

What passes for a (heist) plot in Peninsula involves $20M in cold, hard cash (U.S.) sitting in an abandoned truck near the Incheon port, an American mobster somehow slumming in Hong Kong ―  the “home” in name only to South Koreans who managed to escape the South Korean peninsula before it was closed to the outside world ― and four refugees, including Jung-Seok and Chul-min (Kim Do-Yoon), Jung-Seok’s brother-in-law (Jung-Seok’s sister and brother didn’t survive the zombie plague), and a couple of strays marked for early exits given the absence of backstories or similarly distinguishing characteristics. The mobster and his gang task Jung-Seok, Chul-min, and the others with finding the abandoned truck, driving it to the dock without getting noticed by any survivors of the plague or the ravenous zombie hordes occupying the city, and collecting a cool $2.5M each for their supposedly minimal efforts.

Of course, their poorly-conceived plan goes almost immediately sideways once ruthless, well-armed survivors make an appearance, leaving Chul-min a hostage forced to participate in a zombie vs. human pit fight (one of Peninsula’s few highlights) and a stunned Jung-Seok saved by scrappy siblings, Yu-jin (Lee Ye-Won) and Jooni (Lee Re), and their mother, Min-Jung (Lee Jung-hyun), a survivor-turned-warrior with inside knowledge of the ex-army unit that controls the territory and kidnapped Chul-min. Oddly, rather than milking Jung-Seok’s perpetual guilt for leaving Chul-min behind for all its melodramatic worth, Yeon allows Jung-Seok to presume his brother-in-law has joined the ranks of the undead or the newly eaten. That leaves Jung-Seok with minimal motivation except retrieving the $20M and escaping the peninsula, something that becomes Min-Jung’s motivation, forcing Jung-Seok into a frustratingly passive, reactionary role for the remainder of Peninsula’s running time.

Train to Busan Presents: Peninsula will be available on August 21st via VOD and limited theatrical bookings.