Review: COMA, The Russians Are Coming to Take You Away to a New World 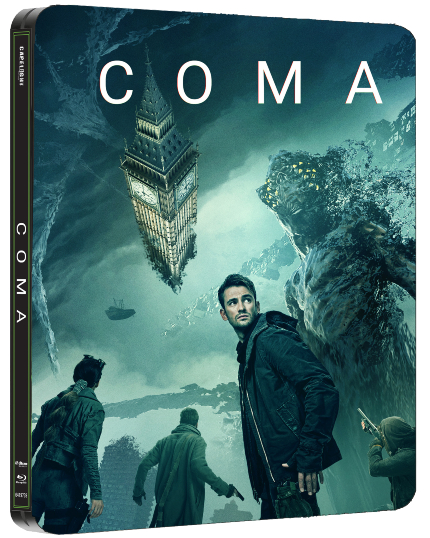 Here a coma, there a coma. Everyone's in a coma nowadays!

In 1978, I saw and enjoyed Michael Crichton's Coma, which I wrote about earlier this year. In 2004, I saw and enjoyed Law Chi-leung's Koma, for which I wrote the program note when it played at AFI Fest. (For the record, others, including this site's founder and editor, Todd Brown, did not like it as much as I did. They were all wrong, of course.) Now comes a new Coma, this one hailing from Russia.

Nikita Argunov, an experienced visual effects artist, makes his feature directorial debut, and also shares screenwriting credit with Aleksei Grawitski, and Timofei Dekin. Like the Chinese adventure Double World, which recently arrived on Netflix, Coma is the type of film that yearns to be seen on the biggest screen possible with an audience in a large cinema, everyone admiring all the cool visuals and forgetting the narrative, because narratives don't matter so much in movies like this.

As I've written before about the trailer, Coma is a fun, trippy thing to spend a few minutes watching. Available now in its full, feature-length glory, it's er, still trippy, though the fun starts to wear off as the explanations begin.

In essence, this Coma feels like a disparate collection of graphic art created by Dutch artist M.C. Escher on a particularly bad bender. The film's protagonist -- never identified by name -- wakes up in a world that makes no sense to any logic-inclined brain, filled with images whisked away, tossed hither and thither, and plastered on the sky in no particular order. After a few, extremely disorienting action scenes, the hero is told that everyone in this particular existence is in a coma, and the world is composed of random memories from these coma-riddled people.

Strangely enough, the world is made up mostly of men, specifically, Eastern European men, though a few white women are allowed to partake in subservient roles. No persons of color can be seen, nor, for that matter, do children nor people who are any older than the grey-haired fellow who is said to have lived the longest in the world -- 15 years.

It's all very suspicious, but not terribly interesting, akin to getting stuck at a loud party where a boisterous, drunken Russian has pinned you against a wall to tell you the story of his boring relatives, over and over again.

The visuals, however, are the film's saving grace, filled as they are with grand monuments and complex buildings and highways that crisscross the sky in opposing dimensions. It's all quite marvelous to watch for a few minutes at a time, and I only wish I could have seen it in a lovely big movie house, where I could disappear into the images and enjoy a glut of eye candy.

Then, afterwards, I could exchange shrugs of disbelief with my viewing companions, as we all tried to piece together what it was, exactly, that we had just seen.

The film is available as of Tuesday, August 4, 2020, on Blu-ray and DVD, via Dark Sky Films and Capelight Pictures. I watched the film for review purposes on a screening link, which was presented with a dubbed English audio track.

Do you feel this content is inappropriate or infringes upon your rights? Click here to report it, or see our DMCA policy.
Anton PampushnyyDark Sky FilmsKonstantin LavronenkoLyubov AksyonovaNikita ArgunovRinal MukhametovRussia