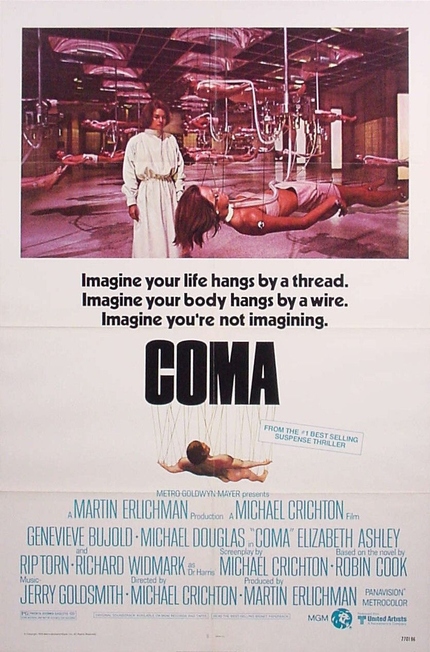 'Our emotions can mean the difference between life and death.'

Coma (1978)
Now available to stream on DirecTV, or rent/buy on a variety of VOD services, including iTunes, Amazon, FandangoNow, Google Play, RedBox, and YouTube.

Ms. Bujold co-starred in Brian de Palma's Obsession, which featured too many "overly melodramatic" twists and turns for our Blu-ray reviewer, Michele "Izzy" Galgana, but for a teenager in 'easy crush' mode, Ms. Bujold's performance on the big screen cemented my interest, which was further fanned by her leading role in Michael Crichton's Coma (1978).

In the same time period, Crichton wrote an original script that became Extreme Close-Up (1973), directed by Jeannot Szwarc, and which I haven't been able to find anywhere to watch. Crichton then became intrigued by a historical event in England, which served as the source for his novel The Great Train Robbery, published in 1975 and later adapted by Crichton for a film version, released in December 1978.

Before the Train film, however, Crichton got involved with the big-screen version of Coma. The second novel by physician turned author Robin Cook and published in 1977, Coma revolves around Susan Wheeler, a medical student in Boston who takes note of two seemingly unrelated cases in which patients ended up in post-surgical comas, eventually uncovering a conspiracy reaching into the upper levels of the hospital administration.

In the film version, adapted by Crichton, Susan (Geneviève Bujold) is a doctor who is
already linked to surgery resident Mark Bellows (Michael Douglas). They are experiencing a few rocks in their romantic road, stemming from how they are treated professionally. Susan's interest in the coma cases grows into an obsession when Nancy Greenley (Lois Chiles) -- the second unfortunate patient in the novel, but here transformed into Susan's best friend -- suffers the same fate after what should be a routine surgical procedure.

Crichton's changes to the characters of Mark and Nancy, and how they fit into Susan's life, measurably improve the plot dynamics, lending themselves to great audience involvement. Even without knowing that when I first saw the film theatrically in early 1978, I saw the relationship between Suan and Mark as a clash of equals, while Nancy's fate deepened the meaning behind Susan's growing obsession to find answers.

Watching Coma again and again over the years -- I've probably seen it four or five times in total, most recently a few weeks ago -- Bujold's performance remains assured and appealing. She remains a woman who must fight, simply to be recognized by the men in the male dominated world and in her profession.

Not even her love interest Mark truly takes her seriously; he's quick to dismiss her concerns. As for the domineering Dr. George (Rip Torn) and the lordly Dr. Harris (Richard Widmak), Susan is simply a nuisance, a gnat to be swatted away without much thought.

The supporting cast is dotted with some familiar faces, perhaps most notably in Tom Selleck's appearance as the first coma victim, but there's also Elizabeth Ashley as a third-act nemesis, Hari Rhodes as the most empathetic male doctor, and Lance LeGault as a looming, shadowy force of evil. Coming off his likable cop in TV's The Streets of San Francisco, Michael Douglas is very likable, but also a bit infuriating in his stubborn male pride. Or is that revisionist thinking on my part? The following year, he would co-star in The China Syndrome.

Geneviève Bujold continues to forge a fascinating career, usually more compelling to watch in whatever role she's playing then the male actors who surround her. And now I'm feeling a need to catch up with what she's been doing lately.

Do you feel this content is inappropriate or infringes upon your rights? Click here to report it, or see our DMCA policy.
Geneviève BujoldMichael CrichtonMichael DouglasRichard WidmarkRobin Cook