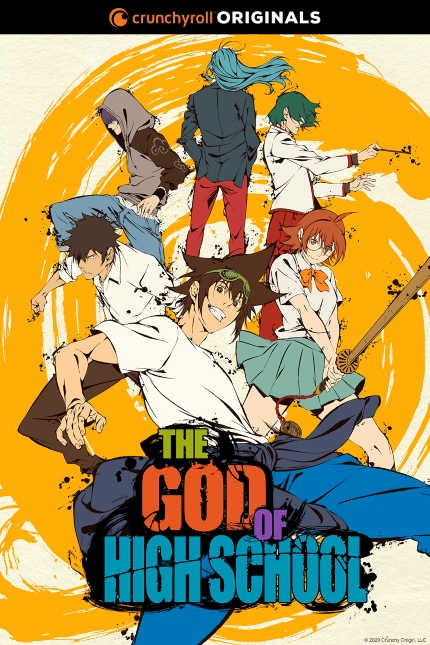 It's a free-for-all fight! Yay?

The God of High School
Now streaming on Crunchyroll and VRV.

The South Korean school year begins in Seoul with the commencement of a martial-arts tournament allowing anyone (i.e. nearly all boys) to fight in any style they choose. This leads to sheer chaos, as shown in the first two episodes that have been simulcast in the U.S. via Crunchyroll and VRV so far.

While the first 15 minutes of the first episode are filled with a blitzkrieg of animation styles, the fighting sequences tamp down the switching art styles in order to showcase the fights, so if you love animated martial-arts tournaments, this show may be for you.

As we noted in February 2020, the show is "based on a comic series created by Park Yongje and published by WEBTOON," which may explain why both WEBTOON and Crunchyroll are prominently displayed in tournament signage. The first episode introduces Jin Mori as a wildly-pumping bicyclist, racing through the streets on his way to the tournament, and this mad dash is where he meets two fellow competitors -- the sole woman so far, and another fellow who is more prepared to take a back seat for now -- and they will evidently play key roles in the series alongside Jin.

It's fine if you like fighting shows, though I was hoping for a few different side-plots to be featured as well. An upcoming documentary promises to shed more light on the creative process, heading to MAPPA Studios to go behind the scenes to talk with the team behind the anime adaptation.

I watched the second episode, but missed entirely that one of the characters is inspired by Robert Downey Jr as Tony Stark (aka Iron Man). The clip below gets more into that; the documentary will premiere next Monday morning, July 20, on Crunchyroll and the service's YouTube channel.

In any event, the series just launched and I'm really hoping that it will start heading into other directions to keep my interest alive. After all, I understand that some people might love the idea that high-school kids participate in brutal, sometimes sadistic fight tournaments, but not everyone can buy into that.

More about The God of High School