Back in 2017, I reviewed the world premiere of Molly, an apocalyptic Dutch science fiction film by Thijs Meuwese and Colinda Bongers. I loved the film, especially its makers' no-holds-barred approach and crazy ambitions. Instead of being hampered by a lack of budget, Molly seemed to benefit from it in all the right ways, and the film stood out with the amount of inventivity and audacity which had clearly been put into it.

And the good news was that Molly was basically just a try-out for a bigger adventure in that same universe: a full-out action film called Kill Mode. Fast forward a few years, and lo-and-behold: director Thijs Meuwese has actually managed to make it, and it can be seen as a prequel to Molly. 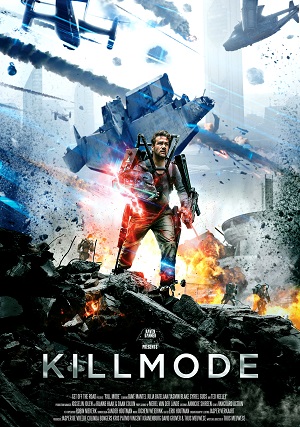 In Kill Mode, we go to the world a few years prior to the events in Molly. A pandemic is ending life as we know it, everyone is infected, and while there is no cure, you can delay death with a medicine. Needless to say, the company which creates the medicine has grown to be unfathomably wealthy and corrupt, and the few doctors who try to create alternatives are hunted as rebels. One of these is David, who has retired from rebel-dom after a police raid killed most of his friends, and who is haunted by nightmares about the young girl called Molly, who was kidnapped during that raid.

When other rebels manage to convince him to participate in one more heist to try and steal a cure from the company, David agrees... but instead of a cure, he discovers a secret lab where weapons research is being done. One of the guinea pigs the rebels run into is Molly, and she may have been turned into the most lethal weapon of all...

So, is Kill Mode fulfilling the promise we saw in Molly? Unfortunately, the film is a bit too un-even to fully satisfy. Bits and pieces are good, some of the actors show great chemistry, and the whole film is peppered with wit and cleverness. But the main story itself and the switch to a larger-budget action film do change the expectations somewhat, and not for the better. While watching the film Molly, I wanted to grab a camera and start filming my own action film, so strong was the sense of fun and ingenuity on display. With Kill Mode, the moment the action and special effects start, the film directly competes with productions a hundred times its size and scope, and its eyecatchers cannot hope to win that battle from the dozens of action films we've already seen.

With Molly, you couldn't help but wonder "how the hell did they do that when there clearly was no budget?", while with Kill Mode, Thijs Meuwese successfully manages to convince you you're watching a regular action film. In all probability his stretching-a-penny-into-a-dollar skills would make Larry Cohen and Rogar Corman applaud, but here unfortunately it also makes you stop wondering "how did they do this?" and because of that, the film loses a lot of the charm which Molly had in spades.

Still, like I said, there are plenty of fun bits, you get to see Julia Batelaan as Molly again, and in the film's start you get treated to a crazy point-of-view shot which invites a few replays. And I still can't wait to see what Thijs Meuwese will do next.