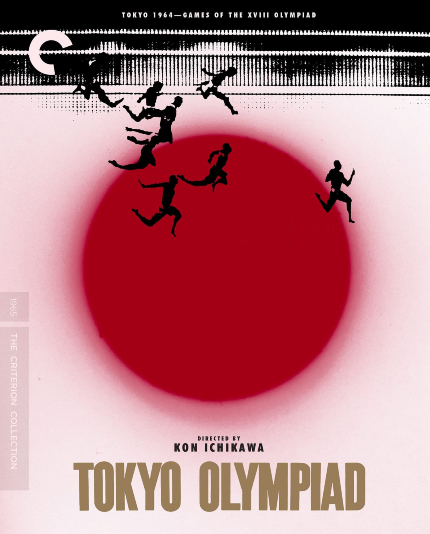 Reminder to myself: never judge a film by its premise.

Tokyo Olympiad (1965)
The film is now available on Blu-ray and DVD, via The Criterion Collection.

"Somebody had to do it," says director Ichikawa Kon in an interview from before the Olympic Games began in Fall 1964, which is included as part of the splendid, comprehensive Blu-ray from The Criterion Collection.

Kurosawa Akira was originally slated to direct a documentary on the first Olympics to be held in Asia, but after visiting the previous event, held in Rome, he decided that the budget offered to him was not sufficient for what he wanted to do. Thus, Ichikawa Kon was presented with the opportunity to make his first documentary film, after he had already made a number of narrative films in the post-World War II era in Japan, including The Burmese Harp (1956), Fires on the Plain (1959), and An Actor's Revenge (1963), the latter of which is also available from The Criterion Collection and was reviewed by our own Matt Brown.

And the resultant film, Tokyo Olympiad, is magnificent!

Frankly, though, it took me a while to come to that conclusion. I've been watching the Olympics on television since the Munich games in 1972, which ended my innocence about the games when terrorists kidnapped and murdered athletes, leading to more athletes being killed. Sporadic bursts of joy from watching the event have overcome those memories on occasion, but Tokyo Olympiad is the first time I've willingly put the past aside and watched any extended documentation of the games.

My reasons, and reaction, are entirely due to Ichikawa Kon's approach and execution, which gradually won me over. The film begins, strikingly, with the rising of the sun, followed by a wrecking ball smashing buildings, in order to make way for the construction of the buildings where the athletic competitions will be held. The opening coverage is fine upon first viewing, though what really grabbed was the first race that is shown, about 25 minutes into the film, which is an extended shot from an unexpected angle, whereupon the race is shown again, this time in slow-motion from more unexpected angles.

Thereafter, Tokyo Olympiad held me enthralled. It is far from a typical sports documentary, as much as I have enjoyed those from time to time. Instead, it manages to be a reflection upon the competition itself, as well as a study of the form, techniques, and inclinations of individual athletes, whose names (or the results) are not as important as the efforts they put forth to compete.

In an interview from 1992, running some 32 minutes, Ichikawa reflects upon his experience in making the film, why he insisted upon telephoto lenses, and how he conducted his army of cameramen (possibly as many as 100), telling them to focus on the faces, especially. He also relates his own most memorable moments from the games, including the time when he forgot to film an important event because he got so caught up in what was happening!

The interview from 1964 is included and runs about 8 minutes, as well as an interview with Ichikawa while he was editing (about 3 minutes); his post-production time was very, very short, especially considering all the footage he had to consider.

His longtime editorial collaborator Osada Chizuko speaks about Ichikawa's superb artistry in framing shots, even when he was not in full control of the cameras, in a new documentary, A Singular Vision, which runs some 31 minutes in total. The doc also features interviews with camera operator Yamaguchi Masuo, who has very good and specific memories about his choices and his experiences, and Ichikawa Tatsume, the director's son, who now operates a museum that preserves and honors the heritage of his father and his mother, who wrote the scripts for many of his father's films. (Below is a clip from the documentary, featuring Ichiwaya and Osada.)

A new interview with producer Adrian Wood is also included, in which Wood talks about the restoration of the film, and pinpoints what happened to Tokyo Olympiad in Japan after it was released. Two original trailers are also included, one a preview teaser, as well as the official trailer.

Peter Cowie, film scholar and self-described "Olympics buff," provides a new introduction to the film, as well as "Additional Material," which consists of 84 minutes of restored footage that was not included in the original film, covering four main areas of coverage. The additional material is very, very good, though not quite up to the same level as the film in full, which runs 168 minutes. The new 4K digital restoration looks wonderful.

Cowie can also be heard in a splendid audio commentary from 2001, which is packed full of information about Ichikawa, Japan, the athletes, and the Olympics, supplying the names and stories that are otherwise not present in the film itself. It's an amazing commentary that is well worth a listen.

Summing up: Far more than a 'sports documentary,' The Criterion Collection's edition of Tokyo Olympiad stands tall as an absorbing artistic commentary on the nature of competition. Highly recommended.

More information is available at The Criterion Collection.

Do you feel this content is inappropriate or infringes upon your rights? Click here to report it, or see our DMCA policy.
Blu-rayCriterionIchikawa KonJapanOlympic GamesThe Criterion Collection