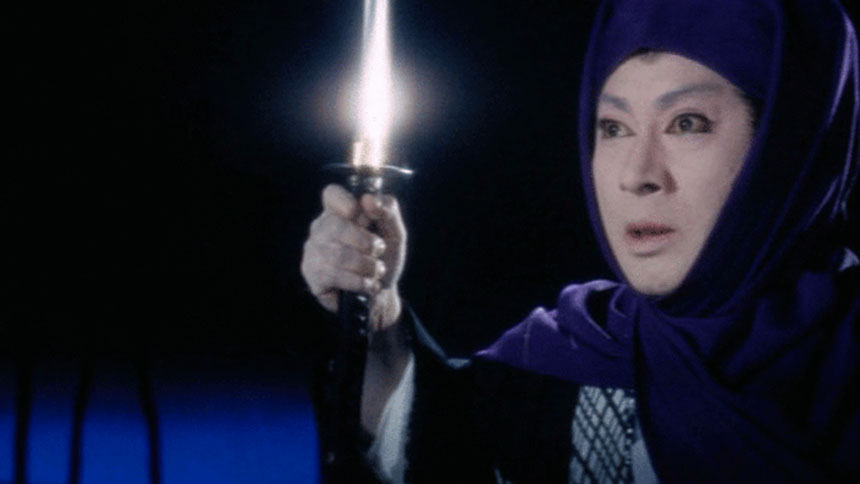 Made right in the middle of the most fertile period in the career of director Kon Ichikawa (The Burmese Harp, Tokyo Olympiad), An Actor's Revenge joins the Criterion Collection this week as spine #912. It's a drab tale of melodrama and revenge set in 19th-century Edo, as an onnagata (a male actor playing exclusively female roles in Kabuki theatre) crafts an intricate plot of retribution against three men who drove his parents to suicide.

Demure and feminine -- never dropping the guise and voice of a woman, even offstage, among intimates -- Yukinojo (Kazuo Hasegawa) is a compellingly unique choice for a protagonist. He finds himself caught between his master, who plucked him from the tragedy of his parents' death to train him to portray a woman onstage, and a pair of women who find him romantically and sexually irresistible, one of whom is the daughter of one of his three targets.

Hasegawa played the role of Yukinojo in a trilogy of films in the 1930s and returns to it here, almost 30 years later, when the actor was well into his fifties. To make matters more complicated, he also -- now, as in the prior film series -- plays a second, unrelated role in the film, that of a scoundrel thief who observes, but never interacts directly with, the onnagata's plot of revenge.

Both performances are terrific, as is Ayako Wakao as Nimiji, the young woman helplessly positioned to be used as a weapon against her own father by the man she loves. The tone and climate of the film are frequently over the top, with much weeping and gnashing of teeth. It's Ichikawa's visual choices that repeatedly stand out, and are worth deeper study.

One nighttime scuffle on Edo's deserted streets is shot entirely in darkness, with no surroundings, only the characters spot-lit and visible. Another is shot against a stylized horizon backdrop of midnight blue, which seems to further extend the film's CinemaScope aspect ratio into a left-to-right ribbon as wide as the landscape itself. (Ichikawa comments on his adoption of 'Scope in a 1956 interview, translated and presented in the Blu-ray's accompanying booklet.)

There's also one of the most compelling and fascinating "flashbacks" I've ever seen, late in the film, when Yukinojo describes his mother's suicide to one of his targets, and his shadow on the wall acts it out. It's such a simple and effective trick that I'm amazed it hasn't been duplicated elsewhere. (Aspiring filmmakers and film students, steal away!)

Criterion's Blu-ray release only has a couple of special features, but they're both useful. One is an hour-long interview with Ichikawa from 1999 where he recounts his career in great detail, from his early interest in working in manga to late-career high points like The Makioka Sisters (1985). There's also a 15-minute interview with film scholar Tony Rayns, who contextualizes An Actor's Revenge within Ichikawa's career and contemporary Japanese filmmaking in general.

Do you feel this content is inappropriate or infringes upon your rights? Click here to report it, or see our DMCA policy.
Blu-rayCriterionJapanKazuo HasegawaKon IchikawaThe Criterion Collection