Coming Soon on Criterion: THE WAR OF THE WORLDS and TASTE OF CHERRY Meditate on Mortality 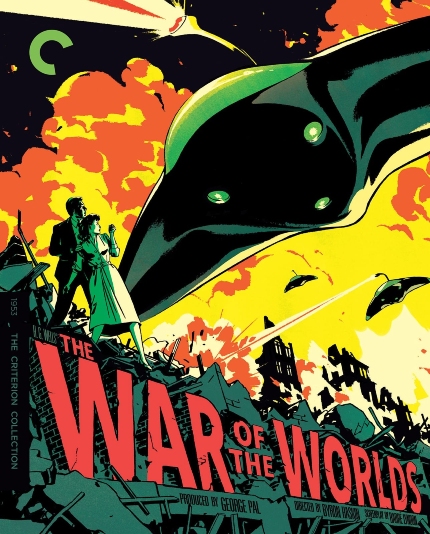 A film that defined my childhood, as far as instilling a deep-seated fear of unfriendly creatures arriving from another planet, will be arriving from The Criterion Collection in July 2020. But will we see the strings?

Of course I'm talking about The War of the Worlds (1953), based on H.G. Wells' novel and famously adopted for radio by Howard Koch, directed and narrated by Orson Welles, that sent shockwaves across the nation in October 1938. (Our elementary school teacher played that version for us one lazy afternoon in the late 1960s, and I was transfixed, at least until it got really boring and rambling in its second half.)

Produced by George Pal, scripted by Barre Lyndon, and directed by Byron Haskin, the film version is quite engaging and colorful, with very presentable visual effects for its time. Criterion promises a "new 4K digital restoration, with uncompressed monaural soundtrack" and also a "new alternate 5.1 surround soundtrack, created by sound designer Ben Burtt and presented in DTS-HD Master Audio."

Other features will include "Movie Archaeologists, a new program on the visual and sound effects in the film featuring Burtt and film historian Craig Barron" and "From the Archive, a new program about the film's restoration featuring Barron, Burtt, and Paramount Pictures archivist Andrea Kalas. Criterion will also be including an "audio commentary from 2005 featuring filmmaker Joe Dante, film historian Bob Burns, and author Bill Warren," as well as a 2005 doc on the making of the film, the 1938 famed radio adaptation, and a radio program from 1940 in which Orson Welles and H.G. Wells talk about the weather (j/k, but I'm sure they talk about the obvious).

What I recall from watching the film issued by Paramount on DVD in 2005 was that you could see the strings holding up the ships! I wish I could have been more adult about it, like Glenn Erikson (DVD Savant) in his very sensible review: "This means that the forest of fine wires supporting the fighting machines is now more visible than ever, so we can't have everything. There was no CG wire removal in 1953 and it would be detrimental revisionism to change the picture now -- today's enlightened filmmakers like George Lucas would never do such a thing! So be an adult and learn to live with it."

Moving forward into adulthood, Abbas Kiarostami's Taste of Cherry (1997) will also be released by Criterion on Blu-ray in July. The synopsis lays it all out: "This austere, emotionally complex drama by the great Abbas Kiarostami follows the middle-aged Mr. Badii (Homayoun Ershadi) as he drives around the hilly outskirts of Tehran looking for someone who will agree to dispose of his body after he commits suicide, a taboo under Islam." Now, I know times are difficult for all of us right now, but please use this only as a stepping-point into meditation, not a battle plan in any way, shape, or form for your personal life, dear reader.

We've already devoted space to Criterion's upcoming Bruce Lee: His Greatest Hits collection, which will also be arriving in July, so let's turn our thoughts to Preston Sturges' The Lady Eve, a delightful concoction that takes place upon a cruise ship. (Ooops, probably should not have mentioned that setting...) Barbara Stanwyck stars as a con artist who's all set to swindle the naive Henry Fonda when, darn it, she kinda falls for the guy. This title will feature a new 4K digital restoration, in the event you have that many Ks, and a new interview with Preston Sturges' son Tom Sturges.

On the other hand, if you're actually prefer more anxiety in your life, you may wish to bring Marriage Story into your home, though you should be ready for a lotta arguments and bitter conflicts between Adam Driver and Scarlett Johansson as a couple coming apart. More than one would-be wag suggested the film should have been titled Divorce Story, to be more accurate, since that is what writer and director Noah Baumbach primarily focuses upon. Still, Laura Dern, as an attorney for Johansson, and Alan Alda and Ray Liott, as attorneys for Driver, deliver amazingly pitch-perfect performances too. Read Thomas Humphrey's review for (actually) insightful critical analysis.

Read even more about the films and pre-order selections at the official Criterion Collection site.