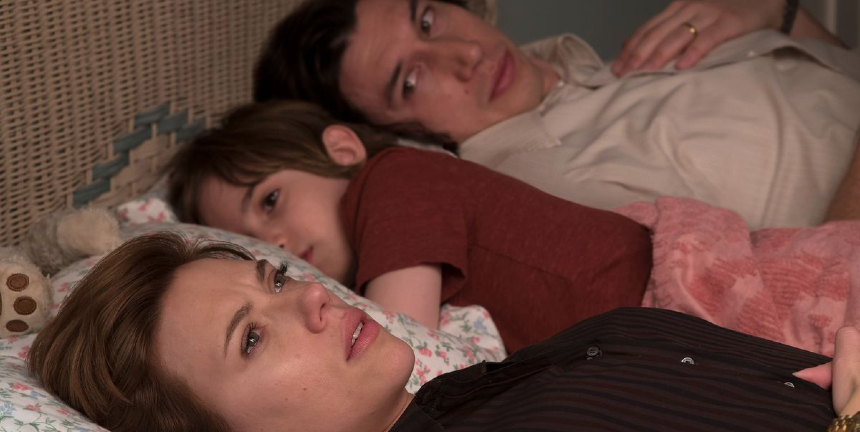 Director Noah Baumbach has had a hand in some truly wonderful movies in his time, whether it be the likes of Wes Anderson's beautifully playful The Fantastic Mr Fox or the black-and-white game-changer Frances Ha, which he and Greta Gerwig gifted to the world back in 2012. And those films left one thing beyond question: Baumbach has a real knack for witty, eccentric and yet natural-sounding dialogue - something which Marriage Story definitely lives up to.

Pairing the perhaps unexpected couple of Adam Driver and Scarlett Johansson as the tale's leading spouses, the movie's current synopsis gives little away, describing the film as little more than 'an incisive and compassionate portrait of a marriage breaking up and a family staying together.' But Marriage Story is definitely more than just another run-of-the-mill portrait of divorce. Its witty back-and-forths constantly leave you with the sense of the backstory that lead these characters to this point and what that will mean for them going forward, and the effect of that is some seriously charged flashes in the pan.

Giving you such a powerful sense of backstory is a pretty complex thing to achieve, and is especially difficult to actually make you feel believably - even if the film does allow itself a pretty indulgent 135 minutes to do it in. As a consequence, Marriage Story definitely doesn't always get it right. It's not entirely tonally pitch perfect. The opening, for example, is doused in voice over, and whilst this scene is generously filled with Baumbach's naturalistic talents, it doesn't quite escape feeling a like a little handful of slightly cheesy, ham-fisted exposition.

That's mostly because the two stars begin by filling us in on why they love each other - first Charlie (Driver), then Nicole (Johansson). But their lists of reasons are poetic, simple and definitely slightly Patterson-esque. If you hadn't read the film's synopsis (or this review) beforehand, you might even think the "marriage story" you're about to see is actually a sort of high-end rom-com, as the characters narrate each others' foibles playing out across a vaiety of spots, from an edgy off-Broadway theatre stage to a bookish New York family home, where the couple and their son Henry live.

This whole opening scene (and much of the film) feels WASPish, deeply personal, carefully observed, and the fact that Driver plays a theatre director who really looks not all that unlike Baumbach definitely adds a little something. His wife Nicole is more than just his muse, too, she is the lead actor of their shared theatre company, and in myriad little ways their characters off-set each other: She is a star, a selfless listener and an infectious dancer, but also a wanton whirlwind of creative choas; he is a self-obsessed playwright, but also a self-sufficient creator of precision, decadent meals and a brooding father. Together they help balance the order of their family's life perfectly.

Except the bathetic irony is that this pretty list of things both characters love about each other actually proves to be a list of positives they wrote, at the behest of a marriage counsellor, as they begin their process of divorce. This gentle intro is therefore soon derailed, and bounces headlong into an ever more rapidly spiralling divorce, with you all the while being left asking (perhaps excessively so) just exactly why these characters can't recognise the love they still have for each other.

Whilst at times this process can feel a touch like a dragging, self-indulgent television melodrama, filled with amusing regional stereotypes and lawyer caricatures played by Laura Dern and Ray Liotta. But when Marriage Story gets it right, it really gets it right! Once you've settled into its slightly self-indulgent theatrics, there's the definitely that rant, that howling argument or that acting set piece that really strikes a chord, and is hugely testament to just how much you buy into the characters that Baumbach creates.

There's also a surprisingly brilliant number of light-hearted, laugh-out-loud moments for a film that is ostensibly about an increasingly acrimonious divorce. Props especially go to Adam Driver, who at times is the best I have yet seen him - and he also achieves types of feats of acting that go well beyond the amusing, gangly comfort zone. In his and Johansson's capable hands, and in the moments when Marriage Story really has something to say, it's definitely at its best.

Just as the synopsis suggests, Baumbach's latest does beautiful justice to the complexity of relationship break-ups. The feature absolutely nails how much you can still know and love someone, even as both parties bitterly reject and distancing themselves. It shows how a family can survive, even as a marriage dies. It wryly captures how funny some of the darkest moments in our personal lives can. And Marriage Story also has something extremely worthwhile to say about how absurd an emotional scenario can become once you bring an army of lawyers, judges and social workers into it.

What is perhaps Marriage Story's greatest feat is its skill for drawing out the ebbs and flows of what is an incredibly rocky process. You'll find yourself deeply investing in the characters, and shifting your allegiances throughout the course of the film, and the way this is pulled off is truly skillful. It'll also be interesting to see what side you come out on, as the film holds up a mirror to you, and see whether or not you come out feeling that one side wins too heavily over the other in the war for your sympathy.

Do you feel this content is inappropriate or infringes upon your rights? Click here to report it, or see our DMCA policy.
Adam DriverNoah BaumbachScarlett JohanssonVenice 2019