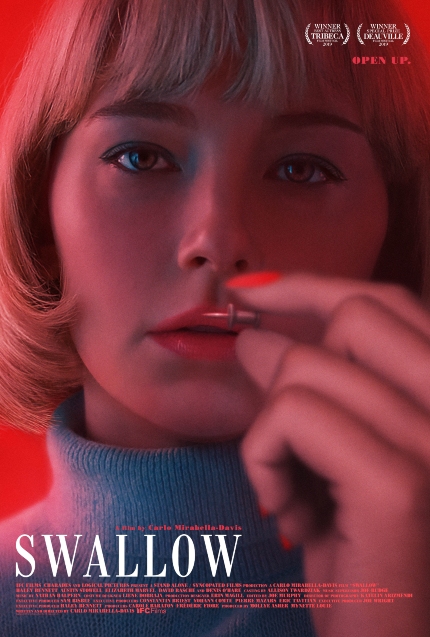 We are introduced to young housewife, Hunter, in a pastel Christian Dior outfit.
Surveying the picturesque Hudson River in Upstate New York, from the raised terrace of her expensive home, she is the kept woman of a wealthy family and is steeling herself for the social function to come. She is pretty and lacking in blemish, with her blonde hair, round face, and perfect figure more important to her rich husband, and his controlling parents, than any form of agency, intimacy or personality in a partner. The framing of these opening moments are still and precise, and are violently intercut with a lamb being taken, skinned and cooked in chops to be served with a fine pinot noir.
While not subtle in the least, Swallow makes up for it with style and craft to spare. It essays Hunter’s eventual rebellion to what is essentially a ‘long slow rape’ by her in-laws, and does so with a flair for production design, cinematography, and performance. This is a very beautiful film about several quite uncomfortable subjects.
After marrying the family scion, named (ahem) Richie, Hunter is moved into this big house of glass and steel with the ostensible task of decorating it for family and work parties. In reality, she is ‘on hold’ until required by her husband or her parents - notably played by longtime character actors David Rasche and Elizabeth Marvel who clearly are both revelling in their dead-eyed monstrous roles as the worlds most passive aggressive in-laws. Hunter is also there to provide an heir to the family fortune, and soon after moving into her gilded cage, she is pregnant, and on track with the will of the family.
Profoundly unhappy, clearly realizing she made a mistake, but unwilling to extricate herself from the various wealth and creature comforts, her anxieties find an outlet in a not uncommon pathology of pregnant women. Pica is a psychological disorder in which a person eats items of no nutritional value out of compulsion: Buttons, safety pins, soil, glass, hair, There are a whole host of sub-categories by item of ingestion with long names that end in -phagia. A lengthy wikipedia page supplies pictures of contents emptied from stomachs should you like to go down that rabbit hole.
With Hunter it starts with ice cubes. When a dinner anecdote is requested, cajoled and then blithely ignored in the most insulting fashion possible, she crunches ice from her glass to assert her existence at the table. This continues, in the privacy of her living room with her copious amounts of free time. A colourful glass marble, which she teases in her mouth like foreplay before committing to the deed.
Shot in a gorgeously uncomfortable way, Swallow is, at times, a great body horror picture. It is worthy of the best of them in generating audience discomfort, even if the film never strays from its given style which presents things in a chaste, often minimalist way. Moving on towards pushpins, batteries, and small trinkets, Hunter lines them up on a glass make-up tray like talismans after they pass through her body. The image, it should be noted, recalls that of a cocaine addict meticulous setting up lines of powder.
It is not long before her adventures in unorthodox consumption are discovered and things become an escalating battle of wills - Hunter asserting her independence via self harm, while the family manipulates her into submission via shame and pricey therapy sessions. They even hire a Syrian military type body guard to police her 24/7.
With its precise craft, and a wonderfully subtle performance from Haley Bennett (previously seen in Hollywood slush like The Girl on the Train, and in small parts in The Equalizer and The Magnificent Seven remakes), there is a nice balance of human drama, feminist manifesto, and horror. Resembling a fledgling Michelle Williams, Bennett takes the construct of the film and makes it a living breathing animal. She is in nearly every scene, and undergoes several character transitions and complex reveals until confronting her own family and past.
A long unbroken take in a bathroom plays over the end credits; a softer, American version of Michael Haneke’s observational detachment in the closing shot of Caché. It neatly bookends things with an empowering coup de grace, for what is one the most accessibly melancholic, and uncomfortably pleasurable films of this year.
Swallow is not as freak-out-artistic as something like Todd Hayne’s Safe, arguably one of the best films of the 1990s, in which Julianne Moore becomes acutely to modern Los Angeles. Nor is it as straight out genre hysteria as Paul Solet’s Grace, where a desperate mother feeds on blood to sustain her parasitic child. Rather, it finds some kind of pragmatic balancing point in between. Visually, it would make a pretty solid double bill with William Oldroyd's Lady MacBeth. Either way, this is a solid, exceptional debut feature for Carlo Mirabella-Davis, one that I hope he builds a long career off of.
Review originally published during Fantasia in July 2019. The film will open in select U.S. theaters and on various VOD platforms on Friday, March 6, via IFC Films.
Tweet Post Submit

Do you feel this content is inappropriate or infringes upon your rights? Click here to report it, or see our DMCA policy.
Austin StowellCarlo Mirabella-DavisDenis O'HareFranceHaley BennettUS