Now Streaming: IN/SPECTRE, Cheerful Mysteries Solved With One Eye, One Leg, One Healer 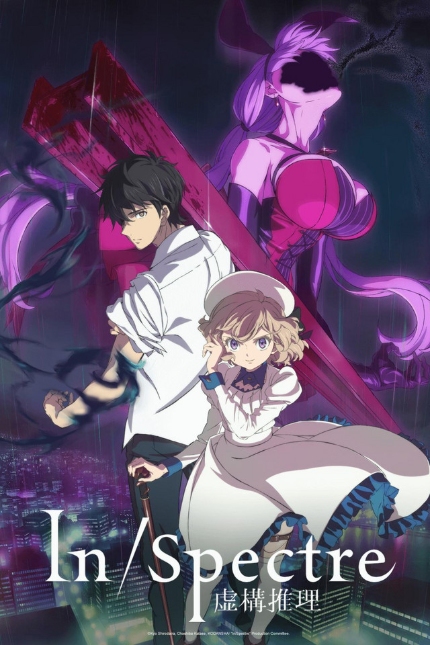 Now that the Winter 2020 simulcast season is nearly halfway done, I'm realizing that I was watching the wrong shows.

In/Spectre
Now streaming on Crunchyroll and an VRV. New episodes every Saturday.

As far as I'm concerned, Yuasa Masaaki's Keep Your Hands Off Eizouken! is the gold standard of the simulcast season. Of the eight other new shows that I've sampled multiple times so far -- all available on Hulu via Funimation -- only two have captured my further personal interest: A3!, about a troupe of aspiring stage actors; and Smile Down the Runway, about an aspiring model and an aspiring designer.

Evidently I'm big on aspirations this year. Those endearing shows aside, ID: Invaded and Toilet-bound Hanako-kun may be of greater interest, as long as you have a taste for bloody, puzzling mysteries (the former) and/or oddball supernatural series (the latter).

That brings me to In/Spectre, which strikes a pleasant, diverting balance as it swirls between light mysteries, light supernatural forces, and sometimes confounding romantic impulses.

At the age of 11, according to the official synopsis, "Iwanaga Kotoko became the god of wisdom to the supernatural beings and spends her days solving problems for them. However, the boy who she fell head over heels for, Sakuragawa Kuro, is someone that is feared by all supernatural creatures." Through five episodes so far, the one-sided romance continually threatens to derail the show, as Iwanaga is portrayed as being needed and pushy and obsessive about her supposed love for Sakuragawa, who does not really appear to be deserving of such affection on the basis of his actions.

In other words, it's a crush that the woman pushes onto the man, which is divorced from reality and normally would make me far too uncomfortable to endure for more than a minute. The mysteries, though, are solved in a deliberate and convincing fashion, which means the show ends up on the positive side of the watchability ledger for me.

It's based on a novel, written by Shirodaira Kyo and illustrated by Kiyohara Hiro, that was first published in 2011. The show features a fair amount of action, which keeps things interesting, and I enjoy the animation, produced by studio Brain's Base.

Summing up: Probably I'm most attracted to the cheerful spirit of the show. Lightweight it may be, but it holds my interest.