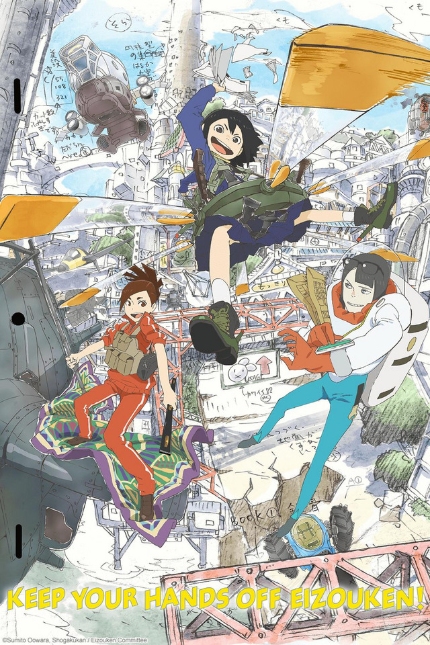 As I've noted before, and most assuredly will note again, I am an anime neophyte. But I will always be attracted to likable characters and a positive storyline, no matter the medium, and such is the case with a delightful new series, directed by Yuasa Masaaki.

First published in 2016, the source manga, written and illustrated by Ōwara Sumito, follows a trio of girls in their first year of high school who come together to make their own anime. The series introduces best friends Midori and Sayaka, who are a contrast in size (one is tall, the other short) and sensibility (one is optimistic, the other is pessimistic).

Midori wants to express herself through her art, specifically anime; Sayaka is far more practical, always looking for ways to make money. As the working-class girls enter their first year of high school, they make the acquaintance of Tsubame, a girl from a wealthy family and already a successful fashion model. But what Tsubame really wants to do is draw; she, too, loves anime.

Through their shared love of anime, Midori and Tsubama quickly discover that they are complementary artists (one loves to create characters, the other loves to create worlds). For her part, Sayaka sees a business opportunity, if she can just corral the other two girls long enough to make something that other people want to see.

Even for a newbie like me, the premise is sufficiently familiar -- social-outcast teens form a club to pursue their passions and forge a new identity -- that I readily enjoy how the formula is bent by Midori and Tsubama's shared love of anime. Combining their merry embrace of creativity with Sakaya's deadpan, long-faced impatience makes for a trio of very likable, and very recognizable, characters. Asano Naoyuki designed the characters for the series, while Oorutaichi (Kickheart) composed the music.

What really sells the show for me, though, are the flights into fancy. I've seen four episodes so far, and all four feature an extended journey into a young woman's mind as she conjures up wild happenings as they occur to her.

These sequences are animated in rough style, as though the storyteller is illustrating her concept as she goes, sketching out the details quickly before she is completely consumed by her joy and excitement at expressing herself. Faced with a mundane object or boring chore, the girls are more likely to trip into the light fantastic; it's a psychedelic drug trip for teens, and entirely safe, and highly recommended, at least from a mental, physical and emotional standpoint.

The manga is being adapted into a live-action film for release in the summer of 2020. Meanwhile, the director's Ride Your Wave, which I saw last fall and absolutely loved (my review here) is heading for U.S. theaters on February 19, via GKids.

For now, this series is an "easy, breezy" way to deal with the winter blues.

Summing up: No minds are damaged. But they may be enlightened.