The latest social-realist drama from Jean-Pierre and Luc Dardenne, starring Idir Ben Addi, Othmane Moumen, and Myriem Akheddiou, is well-intentioned, but unfortunately has little to say about Islamist radicalization. 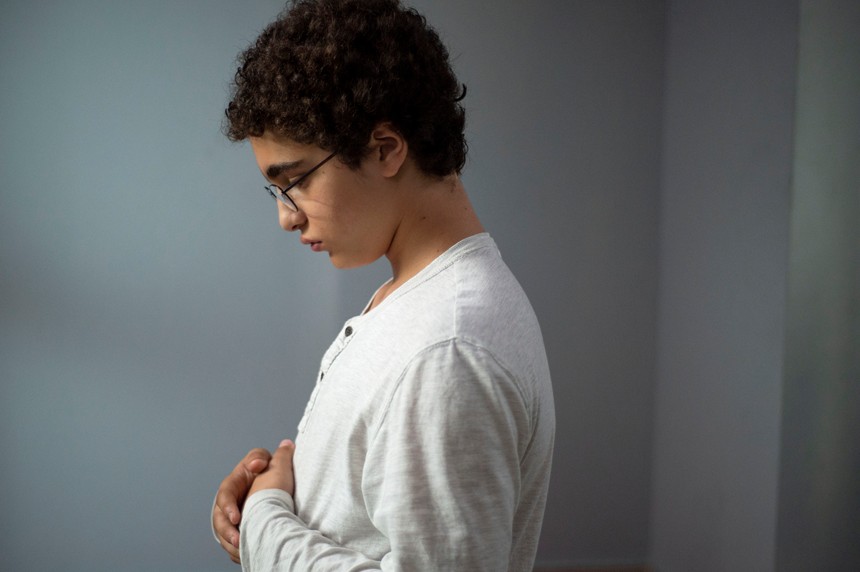 Acclaimed Belgian sibling directing duo Jean-Pierre and Luc Dardenne have often turned their attention to the concerns of troubled youth, in such films as La Promesse, Rosetta, The Child, and The Kid with a Bike. Their films have an urgent immediacy, often employing restless, handheld camerawork mirroring the turbulent lives and emotions of their characters. And even when these characters take actions that are self-destructive or harmful to others, the Dardennes view this all with non-judgmental, humanistic empathy.

These qualities are very much on display in Young Ahmed, the Dardennes' latest film, which marries their brand of social realism with the hot button topic of Islamist radicalization, explored through its titular central character. Ahmed (Idir Ben Addi) is a very impressionable 13-year old who as the film begins is fully under the sway of a radical local imam (Othmane Moumen), who has been filling Ahmed's head with all sorts of ideas related to the imam's interpretation of Muslim purity and impending jihad.

Interestingly for a boy who's just barely hit puberty, and who presumably has little to no experience with the opposite sex, Ahmed's radicalization largely takes the form of a mindset that's virulently anti-woman. He refuses to shake the hand of his teacher Inès (Myriem Akheddiou), as if even that limited kind of physical touch with a woman is somehow corrupting. Ahmed, who's biracial, also sharply criticizes his white mom (Claire Bodson) for her occasional indulgence in alcohol, and calls his sister a slut because of the way she dresses.

Apparently Ahmed's conversion to religious zealotry is a fairly recent occurrence. His mother laments at one point about how just a few weeks before, he seemed to be just a normal kid playing video games and such, but now he's become someone she barely recognizes. These days, Ahmed frequents the local mosque to take in the imam's teachings, assiduously sticks to a rigid schedule of praying five times a day, and reveres a deceased jihadist cousin, frequently visiting a website dedicated to his memory.

As alarming as Ahmed's actions already are, they take a murderous turn for the worse when it comes to Inès, who's started an Arabic class which uses other materials besides the Qur'an (including pop music) to teach the language, and emphasizing practical, modern Arabic over the archaic version found in the Qur'an. The imam harshly and publicly criticizes Inès, calling her an "apostate" and a "heretic" for her teaching methods.

Ahmed takes this as his cue to attempt his own jihadist act, of a sort. He follows Inès to her apartment and, with a knife he's hidden inside his sock, ambushes and stabs her. Thankfully, he doesn't succeed in killing her, but he does injure her enough for Ahmed to be picked up by the cops and subsequently sent to a juvenile rehabilitation center.

At the center, Ahmed is surrounded by caring counselors who try their best to help him, even though initially he makes it difficult for them by sticking to his rigidly held beliefs and ideologies. But eventually he seems to begin to soften, especially when he's sent to work on a farm, where he meets Louise (Victoria Bluck), a cute girl his age with whom he shyly begins to develop a tentative relationship.

Ahmed also asks to meet with Inès, giving his counselors hope for a successful rehabilitation. But in Ahmed's private moments, disturbing signs begin to emerge that his supposed change of heart may be a façade, and that he hasn't really let go of his sinister plans.

There's no denying the Dardennes' impeccably good intentions, but in this case, their dramatization of their contentious subject leaves much to be desired. Their usual habit of plunging us from the first frame in medias res into a highly dramatic situation, while viscerally effective in their other films, here leaves us in a hazy muddle, without any real clues as to what could have made Ahmed take such a hard right turn into hardline religious radicalism.

It also doesn't help that Idir Ben Addi, the young man whose performance is so central, was apparently directed to be such an emotionless, nearly robotic presence. There's precious little interiority in his portrayal; the sum total of his personality seems to lie in his Islamic radicalization, which puts the Dardennes in the unfortunate position of seeming to traffic in fearmongering stereotypes of Muslim people. If the Dardennes did any actual research on their chosen subject, it's difficult to discern from watching this film.

Very disappointingly, Young Ahmed ultimately has very little to say about Islamist radicalization, and what attracts so many people to this. All the good performances and good intentions unfortunately add up to a missed opportunity to truly enlighten us about its subject. The Dardennes attempt to counteract their problematic portrayals of Muslims with one of their patented redemptive endings. Graceful and even transcendent in their other work, here it feels like a hollow, even somewhat desperate bid to escape the narrative and dramatic corner they've painted themselves into.