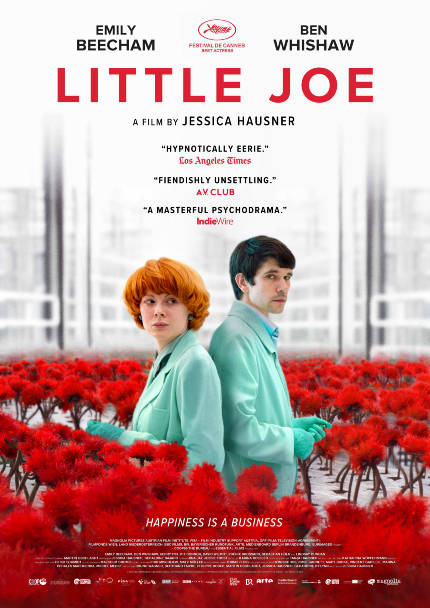 This is because I have been suffering from the effects of a pollen allergy for nearly two months, this year alone, and I have been plagued by this allergy for years. Yet now there is a cure!

Well, that's not what the quiet little creepy trailer for Little Joe guarantees, exactly, but close enough for me! Here's the official synopsis:

"This unnerving feature stars Emily Beecham, who received the Best Actress Award for the film at Cannes Film Festival this year, and also features superb performances from Ben Whishaw, Kerry Fox and Kit Connor who all encounter the crimson beauty of a special plant in Little Joe."

Our own Tom Kiesecoms saw the film at the Cannes Film Festival earlier this year and noted: "As an arthouse horror satire that metaphorically tackles the pharmaceutical industry and weighs in on the boon and bane of self-medicated mood enhancement it is thought-provoking if elusive." (Read his entire review here.)

Check out the trailer below. Little Joe is heading for release in U.S. theaters on December 6 via Magnolia Pictures.

Do you feel this content is inappropriate or infringes upon your rights? Click here to report it, or see our DMCA policy.
AustriaBen WishawEmily BeechamGermanyJessica HausnerUK