Review: LITTLE JOE, Plants Are Smarter Than They Look 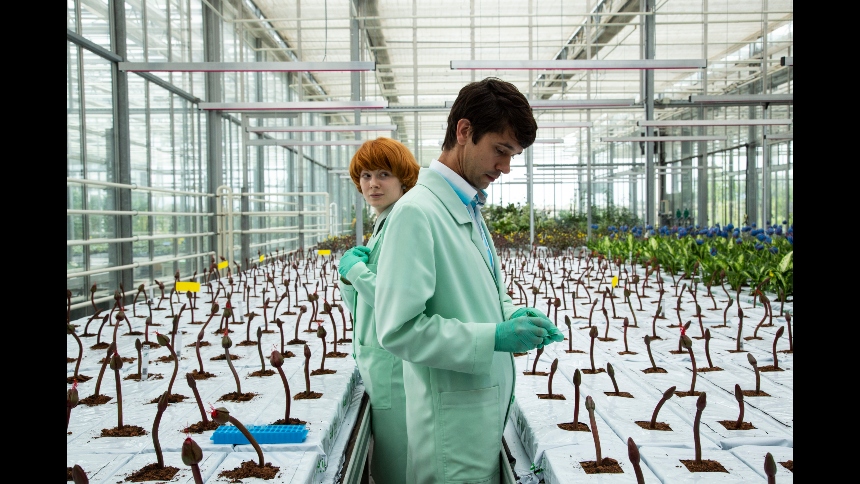 If I Lost My Body presents happiness as a hard-won emotion and the search for wholeness as a potentially lifelong struggle then, by comparison, Jessica Hausner’s Palme d’Or contender [at the Cannes Film Festival] Little Joe questions how far we might conceivably go to achieve the former and if, in pursuit of it, we should risk sacrificing the very difference that tends to define the human race.

Or, at least, that’s part of the heady equation in this singular mindtrip of a movie - a work that’s deceptively on-the-nose, oddly intoxicating and whose ambiguities linger long after the end credits cheekily tout “Happiness Business” over the soundtrack.

Set in the world of hothouses, genetic manipulation and mankind performing Frankensteinian acts of God, Little Joe exists at the junction of scientific innovation and crude corporate greed. What if happiness is a business you can buy into? Plant breeder Alice (Emily Beecham) turns a blind eye to botanical protocols and splices together a beautiful plant that’s intended to be a natural remedy for the blues. Nourish the flower, talk to it, take a little whiff and feel better about yourself and life in general. But is happiness worth it if it comes in the form of a stupefied grin?

No, those who inhale Little Joe’s scent do not become drooling vegetables, but this botanical twist on Invasion of the Body Snatchers leads to some unnatural behavior since the flower has developed a survival mechanism in response to its genetically engineered sterility. In short: get a dose of Joe’s pollen in your system and you unwittingly become the plant’s proxy - happy, calm, but singularly preoccupied with its shelf life and proliferation. Before long most of Alice’s co-workers are slightly whacked out and the performances are wonderfully tweaked, soaring halfway to an artificially created (and therefore uncanny) ‘cloud nine’.

A deliberate, artificial coldness clings to everything and idiosyncratic stylistic choices - such as the gradual zooming in on an interchange until both conversation partners are out of frame and the camera has centered on a spot on the wall or window that really doesn’t hold anything of interest - convey a creeping approach of otherworldliness. Likewise, the film’s digital glossiness creates an effect at once alienating and hypnotic, as does the level of repetition that seeps into the screenplay, with more than a few scenes overstating the potential dangers of the flower and an increasingly nervous Alice scanning her environs for tell-tale signs of altered personalities.

Obvious merits notwithstanding, including a keen eye for color-coding and cacophonous score that invades the film’s measured mundaneness whenever Little Joe turns sinister, Hausner’s latest is far from perfect. Insofar as Little Joe wants to function as a suspense thriller it fails to generate tension. In part this is due to a heavy reliance on expository dialogue and concomitant lack of subtlety which never has the audience guessing whether or not something fishy is going on with the flower.

Still, as an arthouse horror satire that metaphorically tackles the pharmaceutical industry and weighs in on the boon and bane of self-medicated mood enhancement it is thought-provoking if elusive. As the film progresses and more botanists fall under Little Joe’s spell, the commune of happy folks takes on a cultish quality and yet the final scenes are far more glib that you might expect. If it means uniting people by a common cause and everyone becomes happy because of it, should we perhaps drink the kool aid and does the expression still carry a pejorative ring? And can anyone objectively discern 'true' feelings from manufactured ones?

Little Joe packs dangerous thoughts, but is nothing if not a conversation starter.

Review originally published during the Cannes Film Festival in May 2019. The film will be released in the U.S. on Friday, December 6, 2019, via Magnolia Pictures.