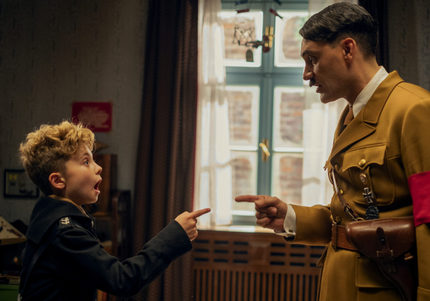 Ten-year-old German boy Jojo Betzler (Roman Griffin Davis) wants nothing more than to join the Hitler youth and help to rid the fatherland of the Jew menace. By his side is his best friend, Hitler (Taika Waititi), or rather his imaginary projection of Hitler, to encourage him and help him through he challenges he's about to face. Jojo lives at home with his mother, an unusually and suspiciously empathetic Rosie (Scarlett Johansson), while his father is away fighting on some far off front.

With no father figure at home, Jojo relies on his imaginary pal to help him tell right from wrong, but when your imaginary pal is one of history's most reviled villains, things can get a bit sticky. Jojo finds himself unsuited for war when he attends the Hitler youth camp and an accident sends him home in bandages. Willing to fight but no longer able, his mother manages to get him a position as an errand boy with the camp's headmaster, Captain Klenzendorf (Sam Rockwell), who sends him off on menial to support the war effort. One afternoon when Jojo is at home he makes a discovery in an unused bedroom that forces him to confront his own beliefs, and that's where Jojo Rabbit really kicks into high gear.

Another feather in director Taika Waititi's already glorious cap, Jojo Rabbit is not only incredibly funny in that absurd manner with which he has such a deft touch, it's also poignant and expertly staged. This is, of course, far from the first film to cast a sideways glance at the lunacy of the Third Reich, but it is certainly among the best at successfully balancing the comedic and serious tones demanded of the subject. Jojo Rabbit is a tremendously empathetic look at childhood, and the way in which we are all victims and products of the situations in which we find ourselves.

Leading the charge is young Roman Griffin Davis, his performance as Jojo Betzler is absolutely heartbreaking in the way in which he embodies the innocence and wide-eyed wonder of youth. Impelled into a battle on his own literal home front against the very demons he's always sworn to destroy, Jojo must grow up fast, and in doing so, he learns that not everything doesn't always have to be the way he's always known. He can and must learn to think for himself, which is terrifying when everything around you has suppressed that impulse your entire life.

Waititi is in his element here, two of his previous features (Boy and Hunt For the Wilderpeople) also dealt with young men desperately seeking a father figure. In Jojo Rabbit, that father figure is an absurdist ten-year-old boy's version of his hero, rather than the actual hero, which certainly makes the experience much more amusing. While Waititi goes very big in his performance as Hitler, it is perfectly pitched for the kind of comedy and story he's trying to tell. Jojo's Hitler is a buffoon, not the tyrant known by the rest of the world, to Jojo he's a cool uncle who encourages him to come out of his shell, until Jojo starts to see the light and understand exactly what is going on around him.

Part All Quiet on the Western Front, part Diary of Anne Frank, part Germany Year Zero, and all Taika Waititi, Jojo Rabbit is an immensely important and timely addition to the canon of anti-war art. It's themes of empathy, resilience, and humanity are perfect for a time in which all of the world seems to be at war, whether overtly or culturally, with each other. It's a reminder that there can be good in us, if we stop listening to the din and start seeing the truth with our own eyes. Jojo Rabbit appeals to the best in all of us, and gives me hope that we can overcome our own struggles and just find a way to be good to one another.