In Richard Bates Jr.’s Tone-Deaf (now in theaters and On Demand), Amanda Crew (of Silicon Valley fame) plays Olive, a young woman whose life is not going that well. She loses her boyfriend and her job and on top of that, she has been dealing for quite some time with her father’s suicide, the absence of her now bohemian mother (Kim Delany), and her own broken dream of playing the piano.

Looking for some distraction, she rents a house outside of her city for the weekend, however the owner (Terminator 2: Judgment Day’s Robert Patrick) is actually an anti-millienial demented psychopath with his own problems (his wife also killed herself) and an urge to kill.

To learn more about Tone-Deaf, here’s the chat I had with Amanda Crew...

ScreenAnarchy: TONE-DEAF has horror and violence but it’s also satirical and funny. Was this combination of genres the thing that got you interested?

Amanda Crew: Yeah, that was absolutely the intrigue for me, was just kind of taking what you think is gonna just be a standard horror movie and then kind of flipping on expectations and doing something fun with the genre and different.

I’ve seen Ricky’s previous films and just thought that he has such a unique voice as a director and a writer. I was excited to do something different. 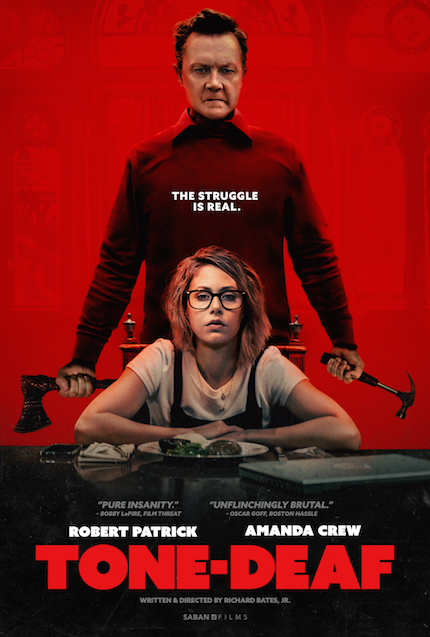 I think Olive is a character that has many elements people can relate to, so how was for you the process to relate with her?

I definitely found elements of myself in Olive. I think a lot of people could find themselves with Olive just because she’s got so much mess and everyone has some sort of mess in their lives.

Getting to play it like a deeply flawed character, who then does stuff to kind of overcompensate the shit that’s going on with her.

There’s overconfidence, like “I have everything together”, and then it comes across as kind of foxy and bitchy.

I thought it was really fun to kind of lean into those things, especially as Ricky is trying to have this satirical, stereotypical millennial. It was fun to lean into those parts of her that are not so “positive.”

Now that you mentioned the millennials vs. baby boomers issue, which is obviously a big theme in the film and also what makes it very current for the times. What’s your take on this sort of endless battle between different generations?

I think it was fun that Ricky wanted to poke fun at all that, I think right now is such a heated time with all that. But that’s the beauty of film and art in making light of these things and poking fun at it. I love the kind of battle of the generations, it was fun to exploit that in a film.

Certainly the movie is relying on you and Robert Patrick. How was working with such a legendary character actor, especially for this climax which gets pretty violent and also funny?

That climax is really the bulk of our scenes working together. For the most part, our work was really separate, kind of like our two worlds building as separate worlds and then they come colliding at the climax, so it was fun to dive into that together towards the end of the shoot.

We would pass each other by in between scenes but we didn’t really have an opportunity to really connect that much until we were doing this big standoff scene, which was so fun and really took on a life of its own that I wasn’t fully expecting. I love the climax in the film because it just defies like all rules that you should be playing to in a horror movie at the climax. My favorite scene is the standoff between the two of them at the climax. 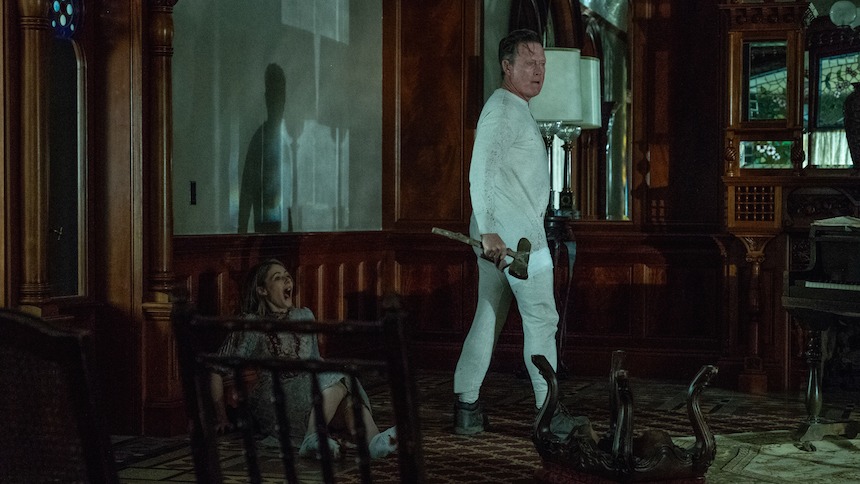 Were there any difficulties when shooting these violent scenes?

No, you know? Everyone said like “were you scared?”, but moviemaking is so fun and you never actually feel like you’re in danger or anything, especially when you are working with pros.

Robert is all about safety, I felt very safe with him. Ricky really had such a fun, light energy while we were making this, he literally just yell out “I can’t believe I’m making this movie.” This sort of reminded everyone that this is so fun that we get to do this. So it never felt intense or anything like that, just pretty fun.

You have this acid trip, this psychedelic scene…

It also involves TWIN PEAKS' Ray Wise [who plays Olive's father]… can you comment on this whole crazy sequence?

It was super fun to shoot that. They had this whole spinning setup, with all these lights on it to make that effect on our faces so it was really cool. And then there was the camera right in the middle of it. It was really hypnotic, like actually, I felt very dizzy at the end [laughs].

The actor you’re working with is behind, you can’t see them, you’re just staring directly into the camera, super dark, there’s just light flashing in your eyes. It was a really cool acting challenge. Then getting to work with Ray, doing the scene with him even though I wasn’t looking directly at his eyes, it was really cool to get to work with him and then to watch him do his coverage. The nuances that he brought to it were just so, so cool.

As much as the film is horror, with elements of the slasher subgenre, it’s also about coming to terms with the past, even Patrick’s character is dealing with his own loss. Then your character regains her relationship with her mother…

Yeah, it’s fun, light, funny and then scary but in an amusing way, but at the heart of it there are these complex characters with real stuff in there. Olive’s traumas from her childhood, her dad committing suicide and then this dysfunctional relationship with her mom, so it’s kind of have her have some closure on that. 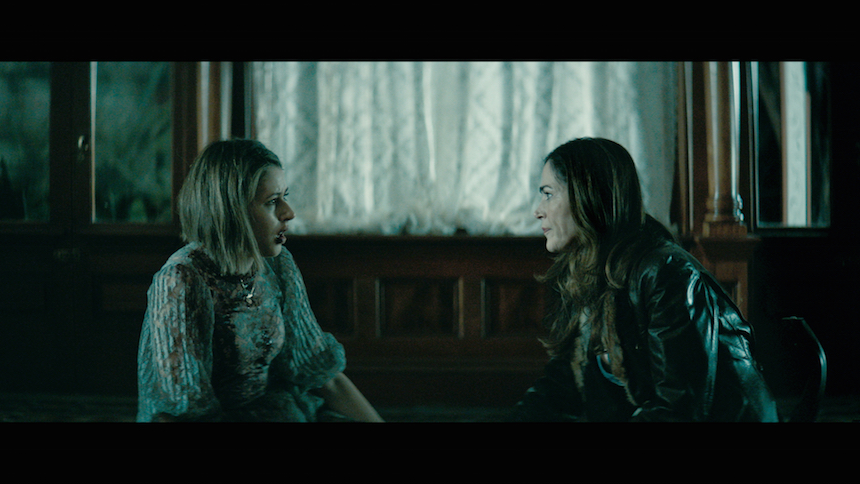 I love that Ricky chose to keep that last frame super wide instead of going in close at a vulnerable moment with Olive. Even though she has healed a little bit, there’s still that kind of distance with her. I love that he kept that space in that last scene.

Do you feel this content is inappropriate or infringes upon your rights? Click here to report it, or see our DMCA policy.
Amanda CrewKim DelanyRay WiseRichard Bates Jr.Robert PatrickTone-Deaf