SXSW 2019 Review: TONE-DEAF Couldn't Be A More Apt Title For This Topical Thriller 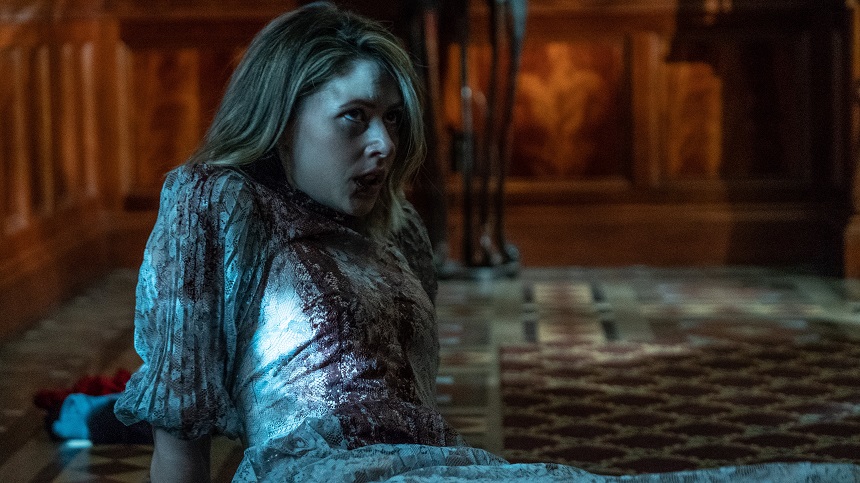 After a pair of incredibly divisive features in Excision and Trash Fire, controversial director Ricky Bates is back with his latest film, and it looks like he's done beating around the bush when it comes to taking on the status quo. Bates has made a reputation for himself as a filmmaker who isn't afraid to confront social and cultural mores with his films, frequently using the medium to get into the nitty-gritty of interpersonal conflicts with family, dissecting the minefield of current body image politics and more. With Tone-Deaf, Bates sets his sights on the generation gap between the bootstrap Baby Boomers and the seemingly fragile Millennials, and leaves all attempts at subtlety behind.

Olive (Amanda Crew) has had a rough week. She lost her job and broke up with her philandering boyfriend and everyone around her seems to agree that she needs to get away from the chaos for a few days. Initially reticent, she does eventually agree with them and books a weekend in the sticks staying at an old fashioned Victorian owned by recent widower Harvey (Robert Patrick), a salt of the earth type with a funny way about him.

As Olive settles into her disconnected sojourn, a few miles up the road Harvey is preparing for an eventful weekend of his own. In the twilight of his life, Harvey has been looking back over his achievements and has realized that he's accomplished most of his bucket list, apart from a single biggie: he's never taken a life, and this seems like a perfect opportunity. Olive's complete obliviousness to the world outside of her phone works in her favor, but can Harvey keep it together enough to execute his plan without getting caught? No. No, he can't. And shit goes sideways real fuckin' quick.

The concept behind the film is intriguing, a kind of captive Most Dangerous Game reframed as a generational conflict. I was completely into it as the film began to unfold and the trajectory made itself clear, and then Harvey talked to the camera...

This is where the film completely lost me and even though there was a random gag here and there that made me smile, the overall tone of the film moved from subversive exploration of generational biases to blatant shit-talking, I really lost interest. Every character is a two dimensional caricature of themselves. The Boomer is a crotchety old man who is sick of the fragile kids-these-days, and the Millennial is more concerned with finding a way to numb her pain the moment than anything real happening in her life or the world around her.

Again, the concept isn't terrible, but it’s the complete disinterest in subtlety or subversion that left me rolling my eyes. With Tone-Deaf, Bates suffers from Cronenberg Syndrome, a filmmaker who made the best films of his career by using genre to address real cultural concerns in an abstract way (Shivers, Rabid, The Fly, Videodrome) to just blatantly telling the audience what to feel and abandoning all pretense of metaphor (A Dangerous Method), making obvious - and thereby far less interesting - his intentions.

A character in a film shouldn't have to face the camera to deliver an aside to the audience, blatantly stating the film's thesis for the audience to understand what's going on. However, in Tone-Deaf that happens on numerous occasions, to the extent that I was left wondering whether or not at some point in the film it would be explained why I was being preached to as though I was a child who couldn't understand what was going on.

The film is competently made, the acting is perfectly fine if appropriately arched for the content, and it will likely find a home with a genre distributor without too much trouble. However, knowing what I know about Ricky Bates' talent and ability to take these concepts and deliver a thesis without going to such extremes to make sure the audience is in on the joke, I was sorely disappointed.

Do you feel this content is inappropriate or infringes upon your rights? Click here to report it, or see our DMCA policy.
Richard Bates Jr.Robert PatrickAmanda CrewAnnaLynne McCordKeisha Castle-HughesComedyHorrorThriller