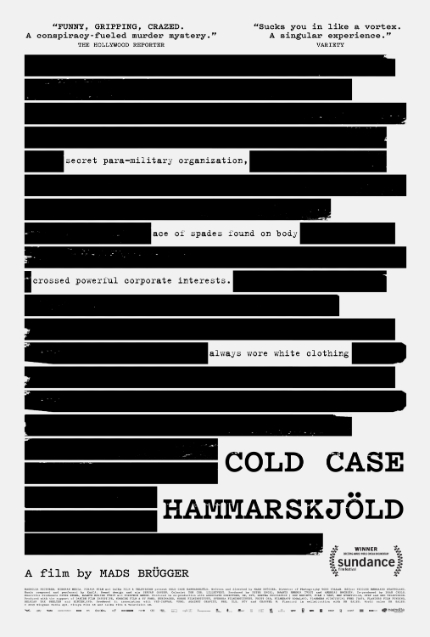 "This could either be the world's biggest murder mystery, or the world's most idiotic conspiracy theory."

Two years before the JFK assassination, on the 18th of September 1961, the world was shocked by the suspicious death of the second serving Secretary-General of the United Nations. In a plane crash in Ndola, Rhodesia, Dag Hammarskjöld was the only person on board not horribly scorched in the 'accident.' Instead he was bloodied, and a playing card was tucked in his shirt collar.

Nearly six decades later, the UN is still (nominally) investigating the details of what was thought first thought to be an accident, then a targeted assassination, of a man who had designs on the political and financial independence of the African continent. In fact, U.S. President John F.  Kennedy himself described the Secretary General as "the greatest statesman of our century." The assassination theory holds several motive possibilities - various industrial interests active in the region (both then and now) or various clandestine military or mercenary operations taking orders from the US, the UK and Europe who had designs at odd with the 'activist' Secretary General.

There are crimes, and then there are crimes. Outside of the small circles of Denmark Television or offbeat cinephiliia, Mads Brügger is criminally unknown. The journalist, comedian, satirist, filmmaker, but above all, provocateur, has been twisting the documentary form into pretzels of truth and performance art for more than a decade.

In 2006, he toured an autistic theatre troupe though North Korea, cascading through a collection of political handlers and bureaucrats, to make a point about propaganda and totalitarian fear imposed on the so-called Democratic Peoples Republic of Korea. As if that stunt, The Red Chapel, was not fraught with enough risk, he then purchased illegal diplomatic credentials from the Central African Republic (CAR) to set up his own personal blood diamond operation (under the front of a match factory whose product would be manufactured by the local Pygmy population). By the time The Ambassador wowed Sundance attendees (and yours truly) in 2011, several of the 'characters' in the film, political figures in the CAR, had disappeared or been killed.

The Danish filmmaker takes large risks, some might say indefensible ones. Along with his countryman Lars Von Trier (whose outfit Zentropa produced The Ambassador), Brügger keeps plenty of his own skin in the game of his cinematic endeavours -- for the sake of your education, and entertainment. He is a hell of a talented filmmaker.

With Cold Case Hammarskjöld, things go the full Errol Morris (Wormwood, A Wilderness of Error) investigation route. With the help of Göran Björkdahl, a Swedish activist/investigator who is in possession of the only part of Hammarskjöld's plane that was not buried under the soil of the Ndola airport, Brügger uses every trick in the documentary playbook: re-creations, animations, historical footage, official and redacted document scavenging, and a lot of interviews with people who where sidelined, ignored, or simply unknown at the time.

Above all, Brügger recreates, in glossy cinematic terms, himself making the documentary itself. Form as function, as with any good conspiracy theory, things start to fold back on themselves in increasingly avant garde ways.

But there is purpose in this narrative trickery. By filming himself, twice, it offers Brügger the storyteller the opportunity to rope a Zodiac-level 'filing cabinet 'of names, facts, dates, and political organizations, together into a 'lean in' yarn of far reaching proportions. Two hundred old Secret Marine Societies, megalomaniac villains dressed in white, biological guerrilla warfare, the fallout of Apartheid, World War II fighter aces, assassins leaving Playing Cards in their victims' collar, and of course, the fate of both a continent, and a fledgling World Government Body are all tethered together.

To say that the film's 128 minutes is dense, is an understatement. Via this experimental technique (which of course the filmmaker acknowledges, in somewhat of a mea culpa, at one point) along with some pretty detailed, rational, detective work, makes the whole thing as seductive and addicting as Serial or The Staircase.

At one point, Michael Moore-style, Brügger and Björkdahl arm themselves with a high powered metal detectors, shovels, and a cigar (in the off chance they are successful), and go scouring the back-fields of the Ndola airport looking for the 50+ year old burial site of the plane. The authorities arrive. They are polite, but firm, regarding this activity. You are simply not welcome to do this kind of digging.

Cold Case Hammarskjöld has caused a stir in 'papers of record' such as The New York Times and The Guardian, reacting to the film compelling presentation and investigation of SAIMR, the South African Institute for Maritime Research, and its quack doctor, Lord Nelson cosplaying Commodore, Keith Maxwell, the "man in white", who is said here of not only co-ordinating the murder of Dag Hammarskjöld, but also weaponizing AIDS virus for genocidal purposes, and ostensibly participating in bad amateur theatre.

The former may have been at the behest of the CIA and MI6, the latter was on his own personal time. Maxwell was a surreal combination of L. Ron Hubbard, and Colonel Kurtz, and Brügger condemns, mythologizes, exposes, at several points even mimics, him in the way only larger than life cinema can.

If there is a signature image across several of the films of Mads Brügger, it is that of an impeccably dressed man, wildly out of place, sitting on a skinny boat drifting on the current of a wide, and fast moving body of water. Here it is Göran Björkdahl, no closer to the truth of the matter, but still floating on the river of possibilites. We have learned things, both true and untrue, along the way.

Cold Case Hammarskjöld is the most engaging (and entertaining) documentary of the year.

Review originally published during HotDocs in May 2019. The film will open in select U.S. theaters on Friday, August 16, via Magnolia Pictures.

Do you feel this content is inappropriate or infringes upon your rights? Click here to report it, or see our DMCA policy.
Africa Aids Cold Case Dag HammarskjöldDocumentaryGöran BjörkdahlMads BrüggerSAIMRUNUnited Nations