COLD CASE HAMMARSKJÖLD: Get Lost in the Details of the Trailer 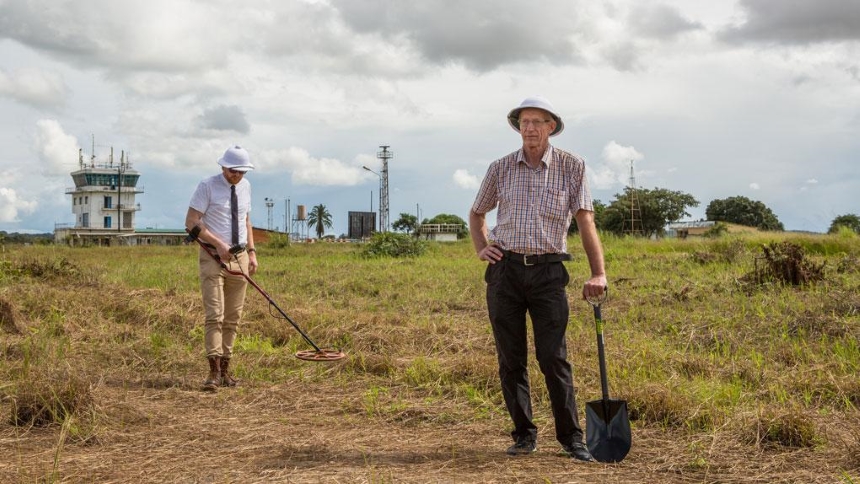 Armed with a plinth hat, a metal detector, two Cuban cigars and an investigating partner who doesn't smoke, Mads Brügger returns to Africa with his most ambitious documentary project yet. You may recall this previous efforts at starting own blood-diamond mine and smuggling operation, just to show how easy and cheap it can be done, in The Ambassador (If you haven't you may want to find yourself a copy of that, it is pretty astonishing).

Here, Brügger tackles the largest conspiracy assassination theory in Europe, that of the second Secretary General of the United Nations, Dag Hammarskjöld. This occured a few years prior to the John F. Kennedy murder, which perhaps hijacked much of the global press coverage, and is probably the reason why most people in North America born after 1970 probably have heard nothing about this particular event.  Suffice it to say, the explanations and forensic gathering is just as sloppy, perhaps worse, considering how Secretary-General's plane when down in an isolated part of the African continent resulting in the deaths of everyone on board.

This trailer does not even scratch the surface to how much of a gonzo-filing-cabinet of information in on display in Cold Case Hammarskjöld, one of the best documentaries of the year.

Magnolia pictures is giving the film a theatrical release in August.

Do you feel this content is inappropriate or infringes upon your rights? Click here to report it, or see our DMCA policy.
Dag HammarskjöldDanishDocumentaryMads BrüggerUnited Nations