Notes on Streaming: Mexican YANKEE, The Drug War From the Inside 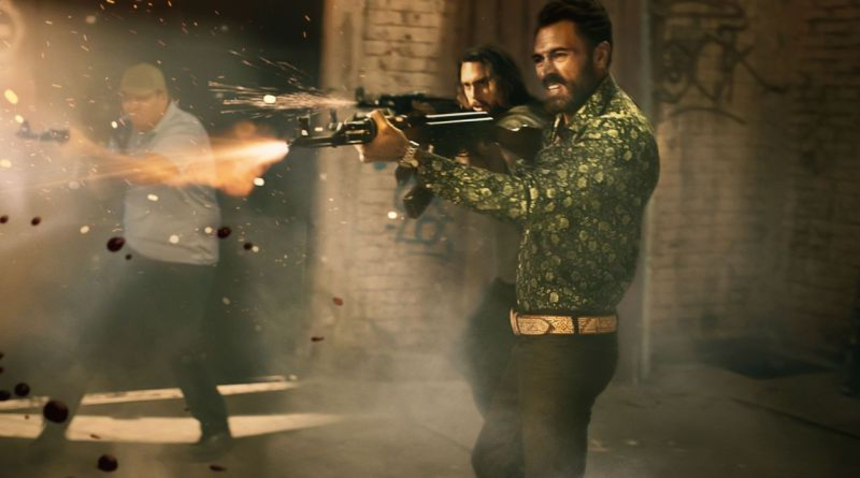 Crossing the border for no fun and plenty of profit, but only if you can survive.

As an individual of mixed Irish and Mexican descent, I never faced outward discrimination while growing up in Southern California during the 1960s. Primarily, I imagine, that's because my family name is Irish and my skin tones are Caucasian.

By his family name and outward appearance, Malcolm Moriarty (Pablo Lyle) does not immediately draw attention as an individual of mixed descent in the new series Yankee. Perhaps that is why I immediately identified with him. And also what makes it easier for him to serve as a cog in the illegal drug industry in Tucson, Arizona.

Malcolm and his wife Phoebe (Pamela Almanza) are raising their two young children in a bilingual household, comfortably residing in the suburbs, and enjoying a lifestyle that is funded by Malcolm's secretive role in receiving drugs from Mexico that are then passed along to a American biker and his gang for distribution. One day that all comes crashing down when a violent incident causes Malcolm to go on the run.

Malcolm must illegally cross the border into Mexico to survive. Hey, you're going the wrong way, buddy!

I've watched 14 episodes of Yankee so far -- out of 25 in total, each running 35-45 minutes -- and, as a genre fan, it's been a blast, though the show makes certain assumptions that are obviously fictional (as in, pushing the edges of credulity).

Created by Diego Enrique Osorno, Veronica Velasco and Epigmenio Ibarra, the show is wildly violent, routinely slaughtering dozens of people without much deeper thought than, 'Wow, perhaps this is closer to reality than I'm willing to accept.' At one point, a law enforcement official casually tells his boss, 'Last night was terrible, but only one murder, so not so bad,' or words to that effect.

Upon crossing the border into Mexico, Malcolm begins a slow ascent to a point where he can be reunited with his family. In the meanwhile, Malcolm's criminal instincts kick in, as he befriends a wide range of people in the criminal underworld in order to achieve his goals. Trust is non-existent and is only given lip service among supposed compatriots, as everyone is out for themselves; survival is definitely not guaranteed.

The series mostly follows Malcolm in Mexico and Phoebe in Arizona, but also tracks the stories of Wolf (Ana Layevska), an ICE agent whose activities are not officially sanctioned by the American government; Cara Sucia (Sebastian Ferrat), a ferocious and unpredictable local crime boss; Yvonne (Gabriela Zamora, I believe), who runs a bar/brothel for Cara Sucia and becomes helpful to Malcolm; and Del Toro (Julio Casado), who wields his authority as District Attorney (or Prosecutor) with wild abandon and corruption.

No big philosophical debates rage on the show; it's all about survival and making money, featuring juicy performances that milk all the emotion out of every scene in which they're featured. Delicious, really.

Summing up: Many, many characters come and go, often by way of murder. The show reveals a slick, melodramatic, yet quicksilver aesthetic and is compulsively watchable, as much as anything to see how the leading characters will survive each episode.

Do you feel this content is inappropriate or infringes upon your rights? Click here to report it, or see our DMCA policy.
Diego Enrique OsornoEpigmenio IbarraMexicoNetflixPablo LyleVeronica Velasco