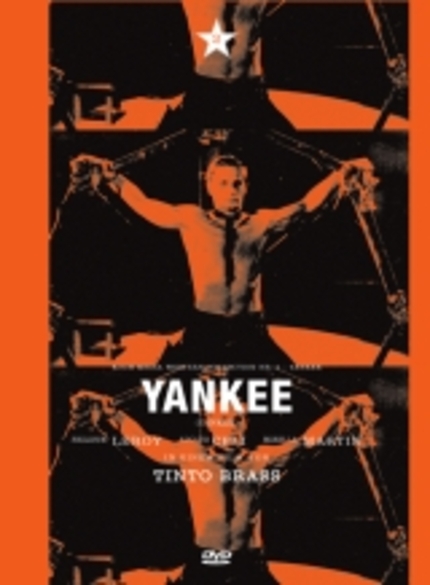 -Tinto Brass made Yankee in 1966. The man who would go on to direct Caligula and Salon Kitty was apparently not yet interested in documenting certain female body parts at that point, but feeling more inclined to follow the trends of the Italian film industry and looking for a direction in which to continue his career. It's a shame that Yankee remained his only foray into the spaghetti western, because here, he demonstrates a keen eye for creative camerawork and delightful little ideas, which in their strength easily manage to overcome the utterly generic plot.

Explaining it is almost unnecessary: Philippe LeRoy plays 'the Yankee', a well-dressed gentleman scouring the Wild West for criminal gangs such as Grande Concho's, who has been terrorizing and raiding villages to finance his lavish lifestyle. The Yankee has an obvious interest in putting these men into their graves and claim the bounties. Inevitably, it all leads to lots of flying bullets.

As derivative as it is - shamelessly copying Leone on more than one occasion, even - Tinto Brass' Yankee still makes for an entertaining spaghetti romp. Budget constraints can be seen in every scene, but Brass and his DP Alfio Contini provide lots of highly imaginative shots and angles, vibrant colours and unique set pieces (Grande Concho's ostentatiously decorated home comes to mind). Now, I'm not entirely familiar with Brass' other works, so I have no clue if these kinds of visuals ever carried on to his later films, but judging by the cult formed around him I would assume so. Either way, it wouldn't be entirely wrong classifying Yankee as one of the more visually enthralling spaghetti westerns that are out there, right besides Enzo G. Castellari's Johnny Hamlet and Giulio Questi's Django, Kill. However, the holes in the paper-thin storyline soon catches up with the film's pace, and I found the second third a bit lengthy and boring. The cat-and-mouse game between the Yankee and Concho's gang in the abandoned village constitutes a nice set-up, with Brass shaping it into a humorous, well-realized sequence whose single flaw is that it simply goes on for far too long to be enjoyable. Afterwards, the usual assortment of twists and turns are introduced, eventually leading up to a predictable and unconvincing finale.

More positive things could be said about the two main actors. Adolfo Celi puts up his usual villainy manners, and I liked the resulting sense of familiarity. LeRoy is really solid, his cheekiness often reminding me of Gianni Garko's portrayal of Sartana. Just like him, the Yankee is a self-confident, cool guy, always finding time to let off a clever remark. Grim, dirty cowboys looking for vengeance are not present in [b]Yankee[/b], and while characters like the Yankee have been done before (and afterwards), it's a refreshing touch to the script.

Additional trivia for those interested in Italian film music - Nini Rosso created an upbeat, catchy score for this flick, which suits the mood and particularly, Philippe LeRoy's character. Back in the 60s, he was mostly active as a renowned jazz and session musician, specializing in trumpet and trombone. His piece 'Il silenzio', composed in 1965, went on to lead the charts in many European countries and made him a star over night. He never achieved fame as a film composer though, Yankee being only one of a handful of credited works.