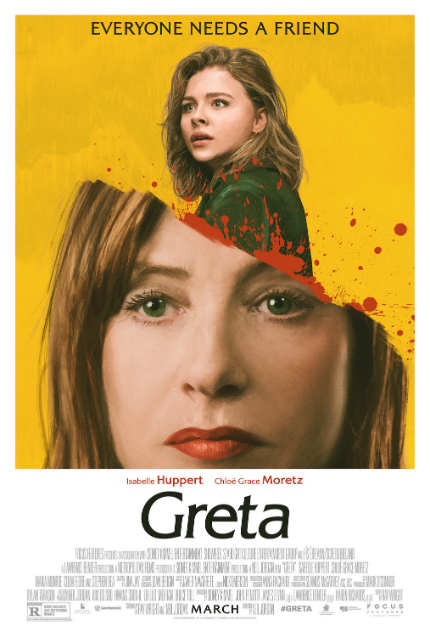 What's new today: a suspense thriller, a dance thing, and a horror drama.

Young Frances (Chloe Grace Moretz) has graduated from college and moved from Boston to New York City with her best friend Erica (Maika Monroe). Frances works on the wait staff at an elegant restaurant, but her primary occupation is grieving the death of her mother the year before.

Well-to-do yet down-to-earth Erica does her best, but Frances really misses her mom, and so it's no wonder that, upon returning a lost purse, she becomes friends with the purse's owner, Greta (Isabelle Huppert). The widowed Greta is away from her daughter, she tells Greta, and is quite happy to treat her as her daughter. Naturally, we suspect that something more is afoot, and Jordan and his co-writer Ray Wright do not keep us waiting long before Frances discovers that Greta is not one to be trusted.

What's delightful here is the relationship between Frances and Erica -- the actresses display good, friendly chemistry and make for believable friends -- and the sterling work by Huppert, who can subtly turn on a dime and convincingly slide between complete charm and far more devious emotions. Jordan's continuing deft ability to surprise the viewer with diabolical twists makes it a cut above average. I love how the film chips away at what's expected and/or anticipated and then delivers a turn that we should have seen coming -- or, at least, that I should have seen coming.

I'm sorry I missed this in theaters, but it plays well at home and is a contender for a pleasant evening's viewing with a small group of friends to savor over wine and a cup of coffee. Greta is rated R, but it's quite restrained in its explicit violence and I was not consciously aware of unnecessary or profuse profanities and such.

The film is available on various VOD platforms. I watched today via Amazon.

Gaspar Noe always demands attention from cinephiles, in part because his films are quite distinctive and often disturbing, though they are rarely easy to watch.

Judging by its title alone, Climax sounds like a sequel to his previous film, Love, but his latest is a horror drama that begins on the dance floor. Our own Kwenton Bellette compared the opening credits to Enter the Void (2005), and then noted:

"Climax is sublime; it demonstrates supreme beauty and technique as the dancers perform. ... Climax is a kinetic horror, the movement of both characters and the camera capture a motion of control that spirals into unrestrained atypical violence. ... Climax creates such a tense and unpredictable environment that bleeds out of the screen at just what humans are capable of, and it is kind of terrifying."

Our own J. Hurtado wrote in his review: "After the loss of her best friend Grace, young Aubrey (Virginia Gardner) struggles to make sense of her life. It doesn't help that the world has fallen victim to what appears to be an invasion of alien beasts determined to wipe humanity off the map." Mr. Hurtado acknowledged his initial reservations, but concluded: "After allowing the film to wash over me a couple of times, it has really grown on me."

That sounds like the reason VOD was invented! Well, in my twisted imagination, I suppose. Read more in J. Hurtado's review from earlier this year.

Do you feel this content is inappropriate or infringes upon your rights? Click here to report it, or see our DMCA policy.
AT WhiteGaspar NoeNeil JordanNew GenreVOD