Japanese Cult Hit ONE CUT OF THE DEAD Comes To Hollywood, But Not How You Think 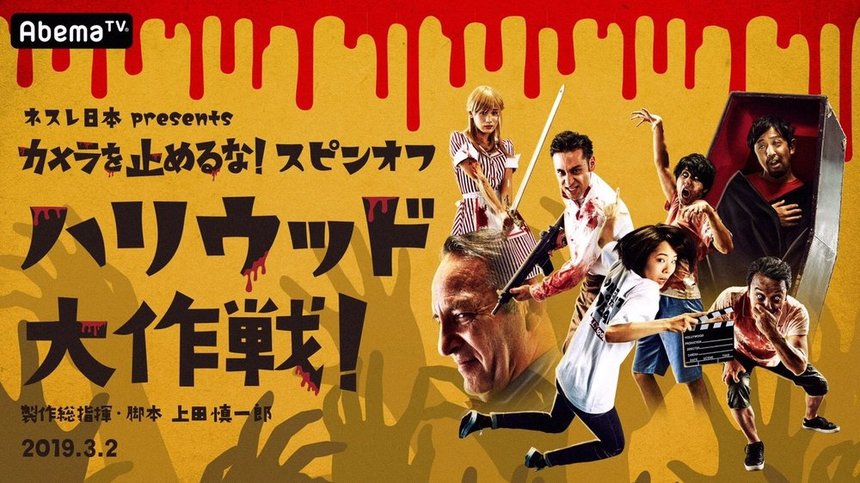 Ueda Shinichiro's One Cut of the Dead made headlines throughout the film world with its staggering festival run and its amazingly profitable cinema run in Japan where it ended up earning back over one thousand times its produciton budget in 2018. The next logical step was finding a way to bring the film and story to the USA, and it's been a comedy of errors trying to determine how exaclty that was going to happen.

Variety first reported that the film's English language remake rights had been purchased and that an English language version was all but certain. While that news has proven to be more complicated than we first thought, it turns out One Cut of the Dead has already been to Hollywood, in the form of a spinoff short feature called...

ONE CUT OF THE DEAD SPIN OFF: IN HOLLYWOOD!

This 59-minute feature was made for TV in Japan and is now being shopped around by Nikkatsu in advance of the film market in Cannes beginning in a few weeks. This feature was directed by Nakaizumi Yuya, supervised by original director Ueda and stars several of the key players from the original films including Hamatso Takayuki, Mao, Shuhama Harumi, and many more.

The film isn't a remake as much as it is a kind of sequel, with Nikkatsu's sales synopsis reading:

Six months passed since the horrible zombie attack...
Chinatsu, who was a heroine of the film “One Cut of the Dead,” lost her voice after the incident. She dyed her hair blonde and works as a waitress in Hollywood, U.S. She changes her name as Holly, and is about to start a new life.
However, the nightmare repeats itself at the restaurant. What the hell?! Real zombies arrive and terrorize the crew in Hollywood.
This is the story of charming, audience-friendly characters who never stop shooting.
One Cut of the Dead Spin Off: In Hollywood has been available through legal means in Japan, but it hasn't yet been subtitled, so it's hard to see as of this moment. However, with the film's runaway success among genre film fans, I find it hard to imagine that it wouldn't find a home somewhere fairly soon.
So, for those of you railing against adapting the film for an English-speaking audience - and I count myself among your number - have faith, there are more One Cut of the Dead adventures to be had if we can be a little patient.
In the meantime, check out the (non English-friendly) teaser below.
2
Sign-In to Vote
Tweet 0 Submit