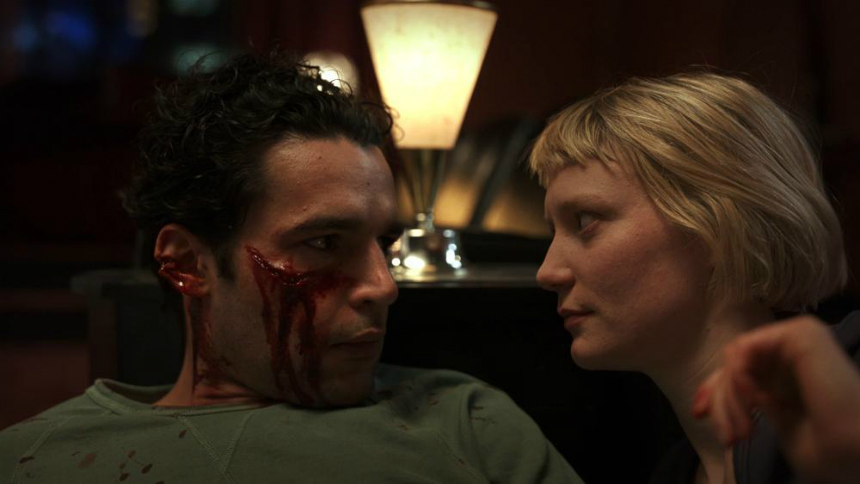 The short novel Piercing has been given a smart and frantically fun screenplay by Nicolas Pesce, who has a unique take on psychological horror himself; I adored his debut The Eyes of My Mother. Both creatives know how to convey twisted psychological horror. The warped minds, hidden agendas and past trauma tropes of the genre are skilfully utilised by both and this meeting of minds ensures that Piercing is a real trip.

Like his first work, Pesce ensures the leads have great chemistry, and that both of the characters are two very uniquely positioned people. Indie actor Christopher Abbott is Reed, a quietly affecting, internally struggling psychopath who proves the moniker, 'It's always the quiet ones'. He lives in a swanky apartment with his tired wife Mona (Laia Costa) and baby.

When the infant eventually tells him in a deep unearthly voice that 'you know what you must do', it is not long after that Reed checks himself into a wood-panelled kitschy hotel, with an intricately specific plan in motion. He arranges a call girl, with the aim to kill her, and silence the dark passenger inside him.

Enter Mia Wasikowska, with dicey semi-Australian accent. She plays said call girl Jackie, a damaged individual estranged from reality and holed up in her expensive apartment. Like a Ryu Murakami female character, she is into self-harm, dangerous and filled with secrets. I wish the film would have revealed more of her, but understand that the circumstance prevents this.

When they finally meet, Reed is a mess, literally covering his tracks in front of her, his quiet, pathetic desperation revealing that maybe he has not killed at all, or at least in a very long time. Unfortunately for him. Jackie ruins his scheme. The power dynamics and fetishist pain keeps alternating between them as more is revealed, and ultimately Piercing throws any conventional notion of victim and antagonist right out the window.

Before the film even begins, there is a VHS tracking aesthetic throughout the production credits that hint at a video nasty, but it also reassures the audience that the film is not to be taken seriously. As the enhanced reality, love-lorn tunes and singular aesthetic pop onto the screen, the film begins proper.

Piercing elevates the notion of torture-porn, and adds a layer of style that works in making the violence not exploitative. This is aided by Argento, Tarantino and De Palma nods, and the aesthetic uses creative technical shots that reveal intentions and vulnerability in both Reed and Jackie. This is not surprising; after his first feature, it is clear that Pesce lovingly adopts the styles he loves and makes them his own.

The world around them is equally uncanny; a plastic retro future that is at once clean, minimal and unlike anything to be expected. People communicate strangely to one another, there is a stilted falseness to everything, like an airport lounge at 3 am off a red-eye, or a display home from the seventies. Kitsch elevator music and cheesy love songs play on vinyl and there are no mobile devices, only designer handsets and phone booths, despite being set in the modern day.

Piercing really does have a unique tone, which shifts and jumbles with the changing states of perceived reality throughout. With this elevation comes some standout scenes in the succinct 80 minute run-time of the film that play to the cult-midnight crowd. There is a drug trip that is genuinely disturbing, incredibly shot and warped, but also works to inform us about Reed, and rocks the clean aesthetic to its core.

The aforementioned old-school telecommunication devices are used well to convey uncanny phone conversations where it is unsure who is really on the other side of that dial. The sudden violence, both real and imagined, is both creative and very disturbing, particularly in the craziness of the strange world they inhabit.

Piercing's greatest strength, however, is reflected in the uncanny nature of Reed and Jackie's sudden specific intimacy, with conversations that work despite the inherent psychosis. Like The Eyes of My Mother, Pesce creates an affecting character study of someone the audience should abhor. In Piercing, the great chemistry between both leads is sweet and charming despite the violently disturbing tête-à-tête.

Piercing is such a great follow-up for the singular visionary director. He is currently working on the Grudge reboot, which after this adapted Japanese derangement and the hypnotic thrills of his first feature, I am now looking forward to immensely.

Review originally published during the Melbourne International Film Festival in August 2018. The film will open in select theaters in the U.S. on Friday, February 1, 2019.

Do you feel this content is inappropriate or infringes upon your rights? Click here to report it, or see our DMCA policy.
christopher abbottmia wasikowsanicolas pesceryu murakami