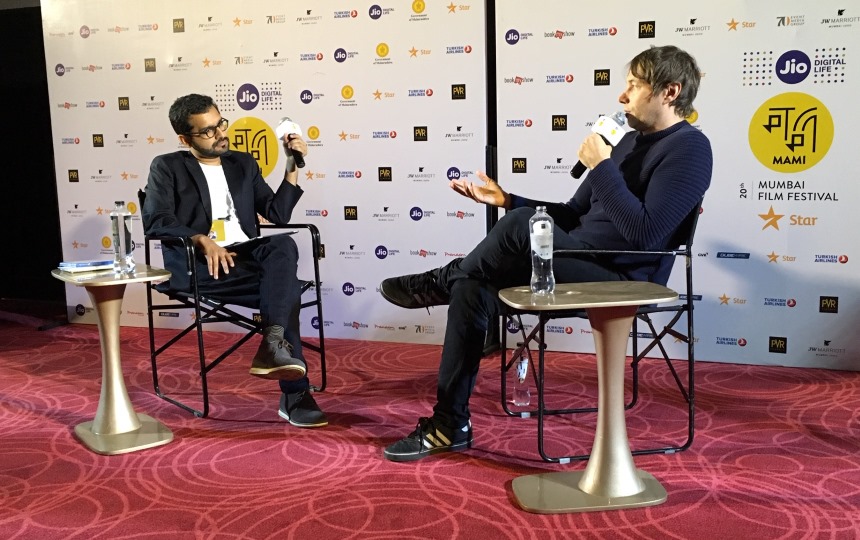 The 20th edition of the Jio MAMI Mumbai Film Festival with Star wrapped up on November 1st, and after about 48 hours of travel and 8 hours of sleep total in the days since, we're finally ready to put the experience to bed.

The festival is a whirlwind event, over two hundred screenings spread out across at least eight main venues across the sprawling metropolis, there's literally no way one could hit every single venue or major event. I tried my damnedest, and I feel like I got a good balance of events, films, and culture shoved into my eye and earholes, but I did leave wanting more, and I think the organizers would consider that a success.

In the weeks leading up to opening night, the festival's PR charge was disrupted when the #metoo movement in India against sexual harassment and assault finally moved from a simmer to a boil. Several films were pulled by the organizers (Chintu Ka Birthday, Kadakh, Bebaak, Awake) and others were pulled by the producers (Balekampa) in the wake of the pressures from the film industry and activists. While a few of these were obvious choices due to the fact that the productions were directly affected by the allegations, others were less so when the connection between the accused and the film were tenuous.

Having spoken with both the organizers and some of those affected tangentially by their decisions, there was no easy answer for either party. Interviews with the trio at the top of MAMI, Smriti Kiran, Kiran Rao, and Anupama Chopra, seem to show them as just trying to do what they thought was best on short notice. They acknowledge that there was no set metric in deciding which films to retract from the program, but they also felt an overarching need to address the controversy head-on. Some of the filmmakers, like Anurag Kashyap, who produced the short film Bebaak (discussed in an earlier dispatch), stepped away from his position as a trustee of the festival in spite of not having been accused of assault himself, but rather seen as not having done enough in the wake of accusations against those within his company, a characterization with which I disagree, but those were the steps he chose to take.

MAMI chose to not only take those steps with regards to films in the program, but also to make the #metoo movement and the state of women in the film industry a central theme throughout the festival. The team organized four last-minute panel talks with various members of the film community to discuss the next steps for Indian cinema, a notoriously male-heavy industry, in which women have always had to fight harder than men by several orders of magnitude. By taking hold of the controversy, MAMI was able to shape the conversation around the issues at hand, leading to an overall positive outcome in spite of what many, including myself, have seen as knee-jerk overreactions in some isolated cases.

From the outset, MAMI was going to have some hurdles to overcome, but I feel as though the team did what they thought was best and followed up their decisions to pull films with actions and open dialogue about how to best move forward. Were mistakes made? I definitely think some of the issues could've been examined with more nuance, and I don't agree with every single step along the way, but with what little time they had to make big decisions, I feel as though the pros outnumber the cons in this case, even though the cons are certainly conspicuous enough to deserve examination.

My final two days at MAMI were packed with activity, even though I only ended up seeing three films. Screen Anarchy fans would likely be most interested in MAMI's relatively new After Dark section. Curated by BiFan programmer Thomas Jongsuk Nam, After Dark is a smallish section of genre films under the MAMI umbrella. India's film festivals don't have a strong history of genre or fantastic film representation, and so the After Dark section is still building momentum with a film community that is far more familiar with art house films than grindhouse stuff.

As a result of the newness of this kind of programming, a lot of the films being shown in the section require a bit of context for the audience to be able to fully understand and appreciate what they are about to see, meaning they need introductions. An introduction by an aficionado or expert on a film or type of film can go miles toward helping the audience connect with material that may at first seem unfamiliar or bizarre. Sure, going in completely blind has its own advantages, but understanding where a film comes from can definitely make a difference in the way in which it is experienced.

Thomas did a number of great intros which I was able to see before the films in his section, however, he had to leave with three days left in the festival, and I was asked to fill his very big shoes in the waning days of MAMI. I did introductions for Ueda Shinichiro's audience favorite, One Cut of the Dead, Paul Rashid's White Chamber, Demian Rugna's Terrified, and intercontinental horror anthology The Field Guide to Evil, and those were among my favorite memories of this MAMI. Bringing a kind of excitement to a room that has been so used to seeing high class, artsy films in a staid, respectful setting was a lot of fun. I don't think anyone quite knew what to do with me and my shouting, but judging by the response, I'm pretty sure I didn't detract much. Long story short, those commitments to introductions cut down on actual screenings for me, but it was well worth the trade.

I did get to sit in with the audience for One Cut of the Dead, which got an additional last minute  screening based purely on audience popular demand. This film, which I first saw at BiFan over the summer, is the ultimate audience experience. Packed with surprises, One Cut of the Dead is a hilarious ode to the love of cinema that has left every audience I know of absolutely demolished by laughter and cheers. MAMI's crowds were no different, in fact, even after this additional screening on the penultimate day of the event, film-goers were still clamoring for even more additional screenings in bigger venues. It really is a communal experience like very few I've ever experienced.

That leads into the final day of MAMI for me. The only sure thing on my schedule was attending the masterclass with filmmaker Sean Baker (Tangerine, The Florida Project). This two hour conversation between Baker and Indian filmmaker Shakun Batra (Kapoor & Sons) was a fascinating look at one of the world's greatest talents. Baker is a filmmaker whose empathy knows no bounds, his ability to dig his way into worlds that most of us may not have even known existed. A borderline documentarian, Baker uses his senses to intuit places where stories may have gotten lost and shines a light into corners many don't dare.

The conversation was wide ranging, with Batra clearly having done his homework and digging into not only Baker's thematic interests, but also his very interesting and unique process. We learned about his approach to choosing new projects, how he researches potential subjects for months or years at a time before settling on the story he wants to tell. We learned about his disregard for traditional 3-act story structure, how his scripts don't follow a traditional structure because life doesn't and he wants to not only keep his stories real, but also keep his audience on their toes. We also learned a lot about why he does what he does, why his influences are more in the early '90s American indie scene than some of his contemporaries, why he chose to shoot Tangerine on iPhone and the advantages of the medium, and much much more. It was an enlightening talk that gave the audience a lot to chew on. If you have a chance to see Baker speak, I highly recommend it.

Finally, I closed out my festival with an impromptu screening of the closing night film, Steve McQueen's Widows. I'd planned to see another film, but a last minute schedule chance by the festival had Widows in that slot and I figured, what the hell? The story of a trio of women widowed by a heist gone bad who find themselves in debt thanks to the men they loved, Widows is a cross between high brow political thriller and pulpy heist action. I liked the film a lot, thanks in no small part to a strong central performance from Viola Davis, though I think the scattered awards talk surrounding it is a bit far fetched. It's too pulpy and entertaining to be a serious awards contender, but that only makes me like it more. A great, heart-pounding way to finish a festival full of highs.

From Widows, I rushed over to the closing night ceremony which included the presentation of the festival awards. I was comically under-dressed for this gala event - my shuttle didn't make it in time for me to change from my street clothes - but had a good time nonetheless. Big winners included Rima Das's Bulbul Can Sing taking home the Golden Gateway in the India Gold section, Phuttiphong Aroonpheng’s Manta Ray taking the trophy in the international competition, the OxFam Award for best film on gender equality went to Ivan Ayr's Soni, while director Darren Aronofsky took home a special Excellence in Cinema award. I managed to catch both Bulbul Can Sing and Soni and definitely found them to be worthy of recognition.

My week wrapped up with a 3:30 AM shuttle to the airport and two solid days of flights, layovers and hotel beds, and I could not be happier. The festival team was always helpful and engaging, even in the most trying circumstances, and most importantly, the programming was outstanding, bringing the best of Indian and international programming to a country where most cinemas aren't willing to take chances on offbeat fare. Thank you so much to the team at MAMI, especially creative director Smriti Kiran and staff member Suchin Mehrotra, for making sure that my experience was top notch, I can't wait to return!

Do you feel this content is inappropriate or infringes upon your rights? Click here to report it, or see our DMCA policy.
IndiaMumbai Film FestivalSean Beker