Review: WIDOWS, a Rip-roaring Robbery Is Just the Icing on the Cake 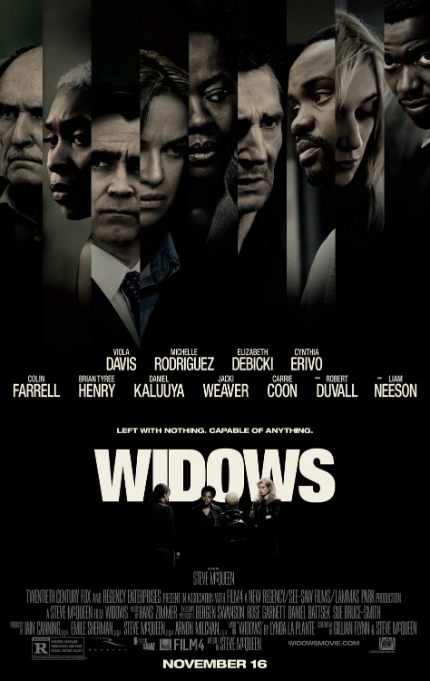 Steve McQueen's whip-pan transition from Oscar-winning 12 Years A Slave to a star-studded commercial remake of a British TV-mini series, Widows, is crafted with such care and visual sophistication that even Viola Davis' character, Veronica, dropping off her poodle at the Dog Hotel has a sweet, satisfying symmetry in its framing.

Veronica is boarding her pup in order to pull off a risky job stealing political campaign money, using the safe-cracking plans developed by her now-dead husband, Harry. His next job was documented in a notebook she inherits along with a lot of debt and violent gangsters looking for stolen money from a fatally-botched previous heist.

Pulling together the widows of Harry's gang, who are all left in their own unique set of financial and familial circumstances when the men were blown up, along with the money in their getaway van, by the police. The proverbial 'one last job' for the freedom to retire is actually the women's first job, one they have to learn at speed, while on the job. When Veronica tells the other women that there is much work to do, and crying isn't on the list, she means it in a no-nonsense, hard-ass kind of way.

The twisty heist screenplay was adapted by Gillian Flynn (Gone Girl, Sharp Objects) and transplanted from early 1980s Liverpool to 2018 Chicago with seamless grace. Much like Spike Lee's Inside Man, it takes a standard Hollywood thriller and injects all the place, politics and specific auteurial touches to craft a movie that is as pleasing to the arthouse crowd as it is to the multiplex set.

From its bravura action opening to its emotionally warm closing shot that lies somewhere on the spectrum between Quentin Tarantino's Jackie Brown and David Mamet's Heist, McQueen finds interesting and effective ways to stage a multitude of distinct scenes. The most compelling one is perhaps a limousine ride from the poor 18th Ward of Chicago to a decidedly more upscale one right next door.

A reluctant political scion (Colin Farrell) is chewed out verbally by his wife (Carrie Coon), as both are oblivious to the jarring transition from poverty to wealth. And this in spite of him running on a platform of economic revitalization. McQueen shoots the scene from the outside of the limo, only using the audio of the actors (no faces or cuts); the actors are blacked out by the tinted windows. Unconventional on the surface, but very much of the show-don't-tell kind of direction that yields the best kind of filmmaking.

Another scene involves a bit of intimidation by a political fixer played by Daniel Kaluuya. Far from the way in-over-his head protagonist in Get Out, or his Rhodes Scholar 'voice of reason' lawyer-SWAT officer in Sicario, Kaluuya here is toxically evil, and his menace is magnified while he scares the hell out of the gangsters who lost his bosses' money, via the camera whirling around in a rabbit-like panic.

The technical pleasures of Widows are matched by its generously deep cast. Viola Davis, of course, can command a camera's attention in pretty much any of her varied roles; she is one of America's finest working actors. McQueen never lets you forget that she is still grieving the loss of her husband (a brief role from Liam Neeson), by a reflection in a window, or the light caress of a pillow. Also shown in flashback is the strain on their relationship at the loss of their son, killed in an expensive car by a panicked white cop. The screenplay plays for keeps with its relevance, even as it is relentless entertaining.

Michelle Rodriguez is another of the wives who loses her retail business to her dead husband's gambling debts, and Elizabeth Debicki escapes her spouses constant beatings only to be thrown into the household of her mother (Jacki Weaver, positively savage) who wants nothing less than whoring out her daughter as a high-end escort. Robert Duvall, in full Apostle mode, shows up as a racist career political operator who wants his son (Colin Farrell) to follow in his footsteps, and play bare knuckle politics with the city planners and the wealthy elites, just like he did. Every decade Duvall drops a monster performance, and while he gets little screen time, he makes the most of it.

The casting is so incredibly deep here that even minor roles are filled out in impressive detail by the likes of Lukas Haas, Garret Dillahunt, Jon Bernthal, Bryan Tyree Henry and Kevin J. O'Connor, the latter of whom gets to do a kind of turn on the closing sequence from There Will Be Blood (note the bowling alley), a movie in which he also had a small role. I have not seen casting this deep and memorable since Stephen Soderbergh's Out of Sight. Remember  Viola Davis, Catherine Keener, Nancy Allen, Luis Guzman, Albert Brooks, Dennis Farina, Samuel L. Jackson, and Michael Keaton in minor roles in that one? Of course you do!

On top of all this drama, complex characters, no-fuss-feminism, and a textured urban ecosystem (Widows at times can feel like a hyper-condensed riff on HBO's The Wire), there is a rip-roaring robbery procedural as well. At one point a character says, "You want all of the good stuff with none of the bad, don't you?" Steve McQueen delivers all of it with crowd-pleasing panache.

Review originally published during the Toronto International Film Festival in September 2018. The film will open wide across Canada and the U.S. on Friday, November 16.

Do you feel this content is inappropriate or infringes upon your rights? Click here to report it, or see our DMCA policy.
Elizabeth DebickiMichelle RodriguezSteve McQueenViola Davis