Interview: Panos Cosmatos on MANDY and His Mythical Realm of the Imaginary

In the final part of Panos Cosmatos' first film, Beyond the Black Rainbow, there is a sequence that presents a quintessential scenario of horror films: two long-haired friends listen to heavy metal music in the middle of nowhere, while they talk, drink beer and smoke, before being violently murdered by the main antagonist.

This scene does not saturate the screen of a specific color -- the color palette includes a lot of red, in addition to high-contrast black and white in the iconic flashback to the sixties -- and it almost does not use the synth and progressive score by Jeremy Schmidt, thus contrasting with the general psychedelic and dreamlike feel of the film.

In Mandy, his second feature film, Cosmatos continues with his already characteristic visual style and, mainly, its first part recalls the rhythm of Beyond the Black Rainbow; however, once main actor Nicolas Cage takes over the actions, Mandy is a total expansion of the occasional violence of that 2010 film, although it always remains close to similar themes, to that dreamy and hallucinogenic aspect, and the sonorous (now with a score of the recently deceased Jóhann Jóhannsson and, for example, a tune by King Crimson) and visual richness. Reddish and bluish tones, as if the colors of the cosmos were reflected in the faces of the central couple, Red (Cage) and Mandy (Andrea Riseborough), and various dreamlike sequences (saturated red is also present) indicate from the beginning that we are, again, before a filmmaker who takes care of each shot in detail and who elevates a relatively simple narrative at all times. 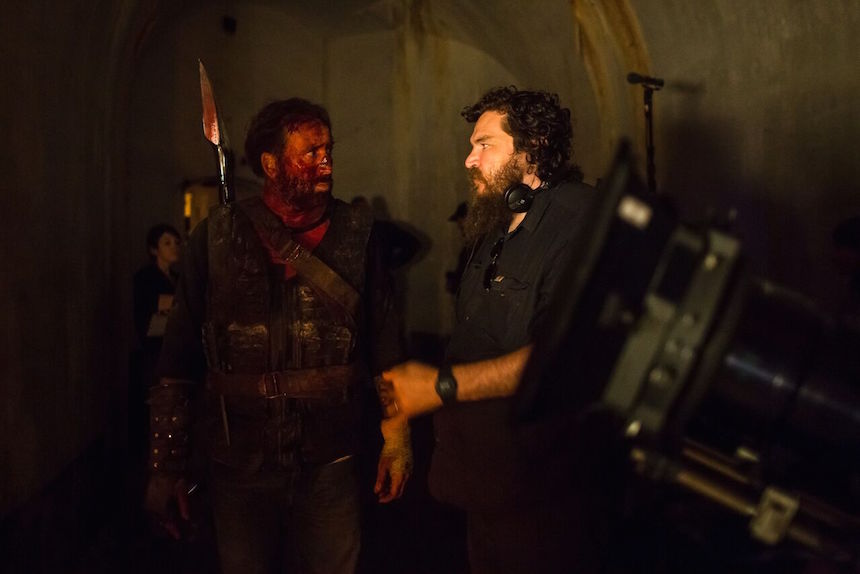 "That’s just the kinds of films I wanna make," said Cosmatos during an interview with ScreenAnarchy. "I think of Mandy and Beyond the Black Rainbow as essentially trance films. It’s about building a sensorial sight experience as much as just delivering a narrative from A to B to C. It’s about an immersive sensation. These two films kind of came at the same time, from the same place where I was at emotionally, so I thought they complemented each other; in a way they are like companion pieces.

"For me, 1983 [the year both movies take place in] is more like a sort of mythical realm that was born when I was a kid and I wasn’t allow to watch horror movies, so I would look at the covers and read the descriptions from the back. When I was creating Beyond the Black Rainbow and, at the same time, this film, I exercised the idea of creating one of these imaginary films, so to me 1983 is a mythical realm of the imaginary.”

In Cosmatos’ very own 1983, we meet the cult led by Jeremiah (Linus Roache), who strangely becomes obsessed with Mandy and, eventually, makes her a victim of his inherent madness. Beyond the Black Rainbow addresses science and the spiritual, while Mandy has a background that is more attached to the religious aspect, but the perpetrators of both films are similar, believing themselves to be special beings and turned into real murderous monsters after getting lost in a psychedelic trip; "I've seen what others can’t see, I went to another world ... you're nothing," Dr. Barry Nyle (Michael Rogers) told his wife in Beyond the Black Rainbow, while Jeremiah in Mandy emphasizes on having been saved from the darkness by God and, therefore, not being a mere piece of flesh like the character of Cage. 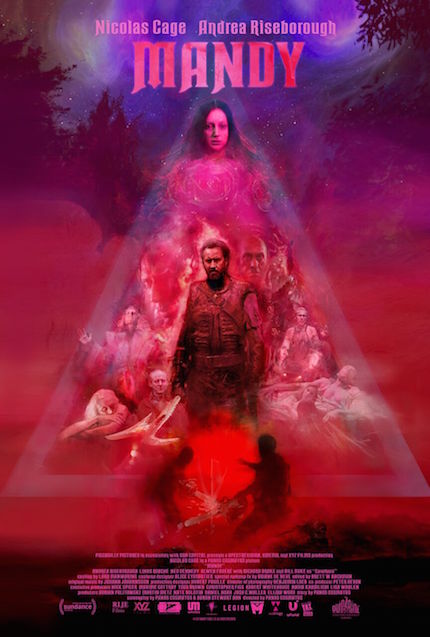 "I can’t get past this idea [laughs], this sort of suspicion of people that want to have all the answers, especially spiritual, you know? There’s something about that, that I find incredibly poisonous and distasteful. These organizations are very delusional and megalomaniac, so I’m interested by the idea of how these people perceive themselves, how these men perceive themselves as something greater than the rest of us”, revealed the director and co-writer of Mandy.

This is where the legendary Nic Cage enters to face Jeremiah’s demented cult and his terrifying allied enforcers who ride motorcycles (known as Black Skulls), leading an exciting and crazy revenge film that, at times, moves away from the subtlety and enigmatic side of Beyond the Black Rainbow and of its own first half. That aura of mystery is replaced by dialogue that refers to the antagonists as “Jesus freaks", “hippie type weirdos", "crazy evil" and "weird shit", and, certainly, by an intense Cage that goes from crying to anger in an instant, forges his ax in fire, gets angry because the villains broke his favorite shirt (this time Cosmatos uses more humor), inhales cocaine and tries a psychedelic drug that takes him to a place similar to where Barry Nyle traveled in Beyond the Black Rainbow, and, back from the trip, seeks revenge with a chainsaw among his weapons.

According to Cosmatos, whose favorite revenge movies include Rolling Thunder and Death Wish 4: The Crackdown ("where Charles Bronson basically takes on the entire L.A. drug cartel”), “the genesis was really realizing that I like the idea of a revenge movie that orbited around the essence of the person who's being avenged. That structure is something that kind of naturally evolved over time. I try to build these things layer by layer by layer and then mount them as I go, like a model kit or something. The intend is to create a pop culture artifact that’s like some kind of strange meteorite found in a forest. And I couldn’t have found a better actor for this strange path this character has to go. Among my favorite movies of all time are comedy Vampire’s Kiss and Birdy, which is like a very delicate, gentle character piece. So I knew that there was no talent that he was incapable of doing. I think he’s an amazing actor.”

Then, Mandy easily joins the list of best revenge films and reaffirms Cosmatos as one of the modern directors to follow, with a unique style product of the education he received from his mother Birgitta Ljungberg-Cosmatos, a Swedish sculptor, and his father George P. Cosmatos, Greek/Italian director of, among several others, the Sylvester Stallone films from the eighties Rambo: First Blood Part II and Cobra. "My dad taught me pragmatism and being at the movie industry, while my mother really nurtured my creative side. They’re both an intrinsic part of what I became as far as the stuff that I make: a strange hybrid form.”