Blu-ray Review: MANDY Now on Home Video of the Mind 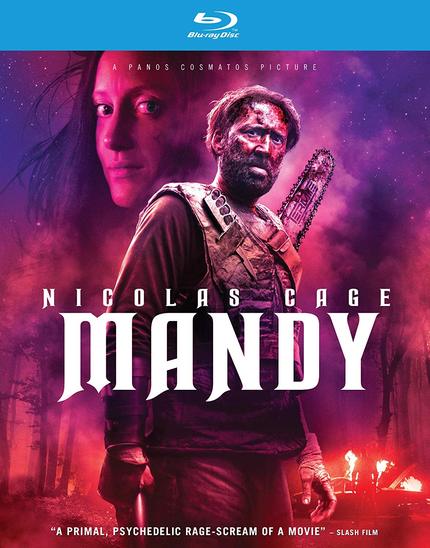 Mandy is a wondrous feast for the eyes and the subconscious, as we all well know by now. Panos Cosmatos’ film has defied the wasteland that has become the theatrical release landscape by finding fans far and wide clamoring at the bit to feed the snowballing demand.

Yes, the reception has been nothing short of a cult fascination for this nightmarish fantasy about profound heartbreak and roaring primal rage, and, in my mind, few films of late are more deserving. Mandy is at once raw animal emotion and heady phantasmal catharsis full of strange beauty and mysterious brain-staining imagery.

And now, one of, if not the most talked about films of 2018 - that or A Star Is Born?? - has hit what we once called ‘home video’. Will it find a video cult following to rival its theatrical success? Will its audience only grow, as many of the 90s’ best cult films only found their lives once they landed on the video store shelf?

Siderant: I hope when future generations look back on the classic era of home video, they’ll consider the fact that a single video cassette cartridge, which cost a video store roughly $100 to purchase so as to rent out, once thirstily rented by the masses over the years, would accumulate thousands upon thousands of watches; one small rectangle might circulate an entire city in its lifetime, because it absolutely had a life. You may find this thought only loosely relevant, but Mandy is so good it really does remind me of the old way, which I think is exactly what Cosmatos wants.

Many will object to the film’s basking in exploitation violence, but I’d imagine those folks don’t much care for the genre in the first place. As is said in the making-of documentary that accompanies the newly released Blu-ray, the film aesthetically legitimizes many of these trash tropes with a love that’s clearly personal to its director. In the EPK doc, Panos speaks of rather than wanting to replicate the vibes of 80s VHS horror, being far more interested in exploring the space that box-art evokes in the imaginations of children too young to rent horror movies that could never live up to a child’s imagination anyway.

It reminds me of the old Cannon Group sales model of getting films into production by selling investors on posters for supposed movies to arouse interest without actually ever being able to make good on that poster’s promise. In Mandy, with a mesala of imagery plucked from pulp fantasy, the occult, Heavy Metal Magazine, and beyond, not only does Panos Cosmatos fulfill the bygone promise of disappointing exploitation films, he crafts a dark, richly vivid fantasy full of cerebral romance and celestial passion. Thus, Mandy is and should be considered a home video event.

The making-of runs just over 20 minutes and it’s quality stuff - as are the 13 minutes worth of deleted and extended scenes. The package even reminds me of the old ways of the medium we once called DVD, when suddenly fans not only had immediate access to their favorite theatrical films, rather than having to wait for that $100 VHS reseller’s tag to decline, the keen collector could also get supplemental glimpses behind the craft of their favorite films.

Nowadays a film’s distribution company would be grateful to have their EPK video even seen, let alone have their film held in the hands of a buyer. Well dammit, you should buy the Mandy Blu-ray and you should watch the shit out of it just like the old days. I hope you watch it so much it skips. Cause if ever a film is worthy of that, it’s darling Mandy.