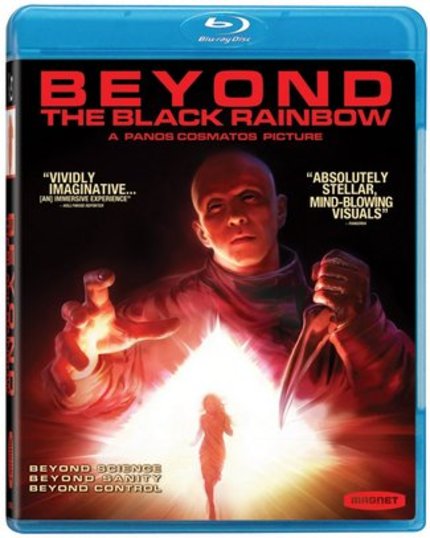 I missed the film at Fantastic Fest 2011, I missed it when it played a week long run here in Dallas, but I'll be damned if I'm going to miss Panos Cosmatos' Beyond the Black Rainbow when it hits home video in a couple of weeks.

Magnet Releasing, purveyors of all things awesome, are bringing Cosmatos' debut feature to Blu-ray and DVD on September 11th, and I truly cannot wait to experience this film and its supposedly fantastic soundtrack in high definition in my own home. Here's Magnet's synopsis:

Beyond the Black Rainbow

Written and Directed by Panos Cosmatos

Set in the strange and oppressive emotional landscape of the year 1983, BEYOND THE BLACK RAINBOW is a Reagan-era fever dream inspired by hazy childhood memories of midnight movies and Saturday morning cartoons. From the producer of Machotaildrop, RAINBOW is the feature film debut of writer and director Panos Cosmatos. Featuring a hypnotic analog synthesizer score by Jeremy Schmidt of "Sinoia Caves" and "Black Mountain," RAINBOW is a film experience for the senses.

You better believe I intend to review this bad boy. Pre-order is up an Amazon now and further details are below.
Sign-In to Vote
Tweet 0 Submit