Fantastic Fest 2018 Review: FP2: BEATS OF RAGE Is One For The Fans 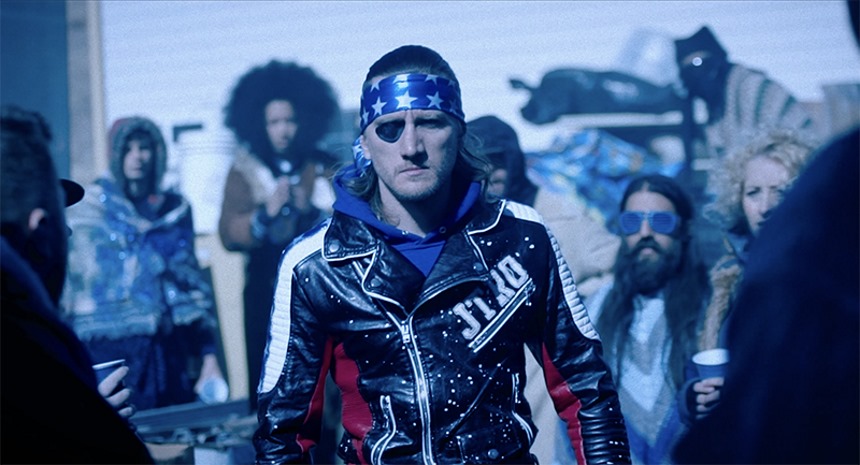 FP2: Beats of Rage is the kind of sequel that seems both impossible and inevitable at the same time. 2012's The FP presented such a unique, idiosyncratic vision of a dystopian future in which the course of human existence was determined by video game combat in the form of "Beat Offs", duels on a Dance Dance Revolution styled arcade game renamed Beat Beat Revelation.

The film was so odd, the tone so unique, and the humor so specifically calibrated that you either love or hate the film, and initial reactions were very split. Writer/director/star Jason Trost managed to round up a team and run a couple of successful crowdfunding campaigns to get FP2 off the result is a film that is both more ambitious than its predecessor and somewhat less successful in the execution.

It is six years after the end of the original FP, and the world of Frazier Park is back in trouble, despite having been saved by JTRO (Trost) at the end of the first film. JTRO has stepped away from the Beat pads and become something of a hermit, meanwhile the Beat Offs continue as the outside world battles for control over a dwindling booze supply. While on the surface JTRO wants to be left alone, there's something inside of him that needs to set things right one more time. He goes on a quest, propelled by mystical forces, to take back control of the booze for the FP from the mysterious soul-stealing AK-47.

There's something not quite right about the FP this time around that makes Beats of Rage a less effective journey into a unique madness than its predecessor. Fans of the original film are very likely to have a lot of fun revisiting the characters and settings of this weird, weird world, but in expanding the universe the film loses focus and starts it becomes evident that resources were spread thin. A lot of the main cast and crew returned for the second chapter in this saga, but things just have less impact, and production value seems significantly thinner this time around.

Beats of Rage adds a level of mysticism to the mix that was entirely absent from the first film that is such an odd choice that I can't really get behind it. Part of what worked for me about The FP is that, as nutty as it was, it all came from an exaggerated sense of reality that seemed tantalizingly plausible. With Beats of Rage, that grounded sensibility is gone, and they've gone full on bonkers, which is likely to score with fans who may have thought that the first film was too restrained - they exist - and needed to go even further with the premise.

The result of this ambition is akin to jumping from the world of Mad Max to the world of Thunderdome without the connective tissue of Road Warrior to ease the transition. Part of the challenge with these fan funded films is that there are very few checks and balances, and while film fans often blame studio interference for ruining what we mistakenly think of as a pure art, sometimes you need someone to tell you that your ideas don't work. That's where Beats of Rage falls apart for me, it's a film where there was no one on set to say "no", which presents an unfiltered vision from a unique voice that probably would've been more appealing with a little bit of a guiding hand. Great for the existing fans, but I don't see this one necessarily making the impression that the original did.