Jason Trost delivered a cult phenomenon with his dance punk post apocalyptic gang film The FP and he's at it again! Yep, The FP now has a sequel titled Beats Of Rage and that sequel now has one hell of a fantastic poster from Tom Hodge of The Dude Designs! All the details you could want about the film in the release below but the big star here is the actual poster, which we're very pleased to give a first look at. Click the image below to enlarge!

POSTER FOR “THE FP 2: BEATS OF RAGE” REVEALED!

North Hollywood, CA – Any follow-up to 2011’s beloved post-apocalyptic comedy The FP has huge Beat-Beat boots to fill. But if the just-revealed poster art is any indication, director Jason Trost is delivering everything we loved about the original in his sequel, Beats of Rage.

“We wanted everything about Beats of Rage to build on and do more of what people loved in The FP,” Trost said. “My hope is that, when they see this super badass poster by Tom Hodge, people will have a sense of how much fun the movie is, and the kind of wild ride they’re in for.”

Created by hand-drawn poster legend Thomas Hodge (The Dude Designs), the official poster for Beats of Rage features a gleaming, pitch-perfect title treatment inspired by the arcade game at the heart of the FP universe, where gangs settle turfwars with battles on “Beat Beat Revalation” dance decks. Flames explode behind it.

At the center of the action, surrounded by characters dressed in dystopian Americana, Beat-Beat champion JTRO (hero of the first film, played by the multi-tooled Trost) has returned. He’s ready for a fight. Looming threateningly over them all in a column of blue and purple light is the sole collector himself, AK-47.

Beats of Rage is a “ghetto-ass fantasy” set in an apocalyptic world locked in a booze drought. It continues the story of fan-favorite JTRO, a Beat-Beating champion from a legendary bloodline of beat-beaters.

Despite hanging up his boots following the events of The FP, JTRO must return to the blood sport of Beat-Beat Revelation one last time. JTRO and KCDC – his mystical hype man – will quest deep into The Wastes, a land decimated by the Beat Wars, to compete in the ancient Beat-Beat tournament, “Beats of Rage,” face AK-47 – and, hopefully, save the world.

Trost plans to debut the film at “a major U.S. genre festival” this October, with more information to be announced on Trost’s Facebook page soon. 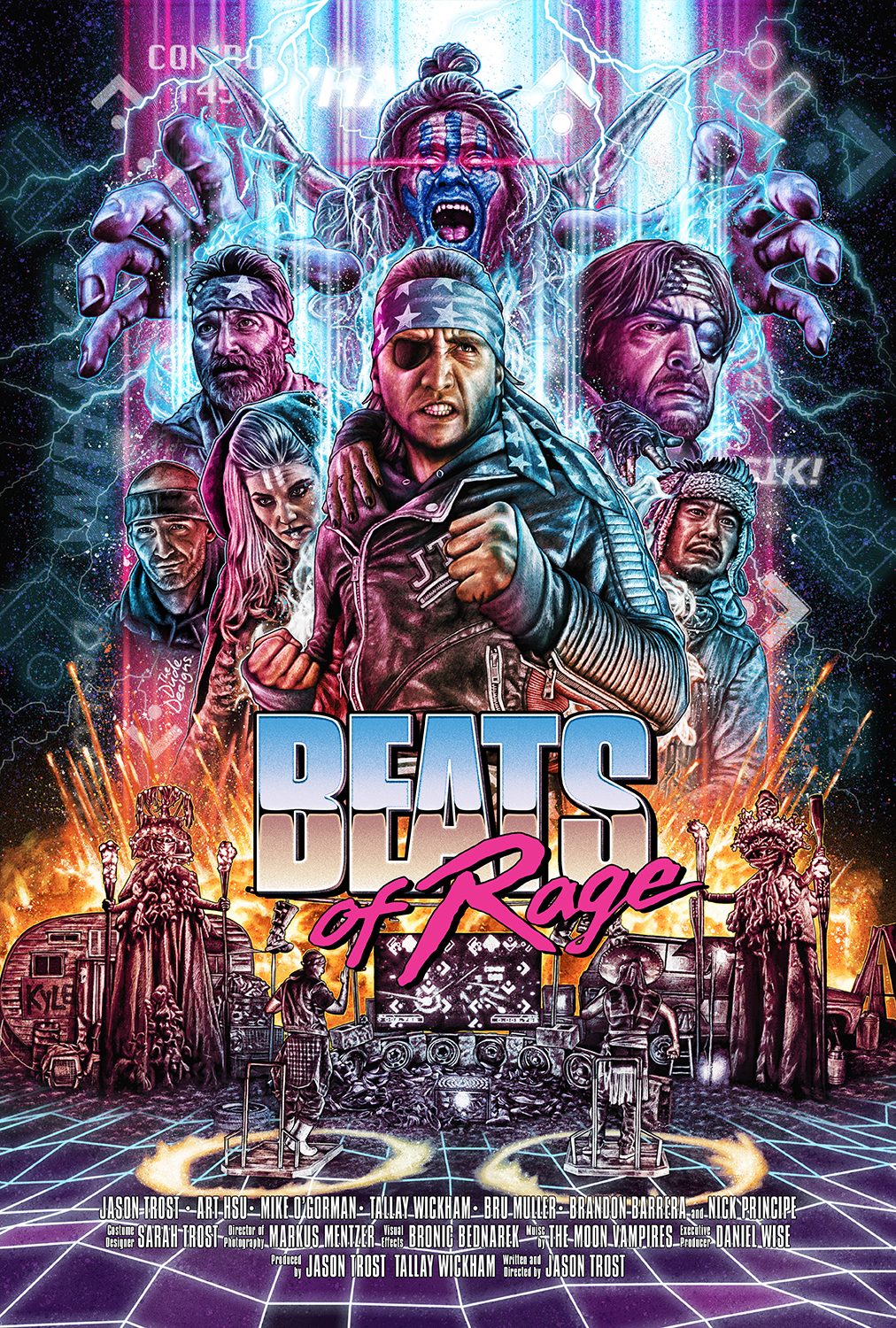