Review: THE CRESCENT, A Quietly Confident Experiment in Horror Cinema 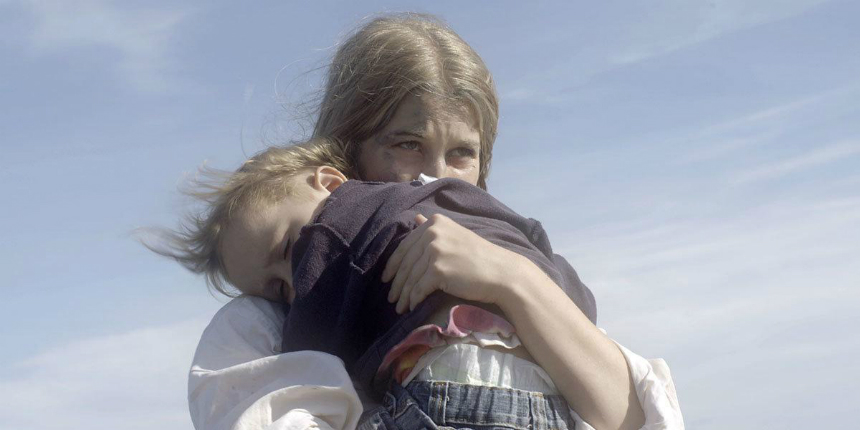 Late in Seth A Smith's The Crescent, there is a hushed shot of the lead character, who happens to be a 2-year-old toddler, sitting on a beach, framed inside an hollow wreck of an old seaside house.

The camera slowly zooms backwards through the broken structure, never losing focus on the child, who is intuitively aware, but not completely so, of just how bad of a place he is in. There are many more grand and experimental shots in the film (including the finest opening credits sequence of the year), but this one unobtrusive zoom stands out as the purest distillation of a quietly confident tone. The Crescent is remarkable realization of an ambitious story on a tiny budget by way of copious amounts of intelligence and talent. I admire its chutzpah, particularly when it tiptoes so quietly.

The toddler in question is Lowen, a precocious, curly-blonde bundle of energy who is not quite sure what to make of the move into his grandmother's architecturally impressive home by the sea. After the recent, sudden death of his father, his young, newly widowed mother Beth retreats to the beachside estate to deal with the unexpected loss of her future life.

She is aloof with her own mother at the funeral, shutting her out physically and emotionally. Beth goes so far as to say she will probably sell the house, after an adjustment period to get her head and life straight with Lowen.

This, naturally, proves quite difficult. The child knows something major has happened, but is not old enough to understand death (he's still building a vocabulary), and certainly not grief. Like all children, he is highly attuned to his environment, and understands that mommy is distant and distracted, and that daddy is nowhere to be seen.

Lowen is also having trouble sleeping, or at least sleeping on a regular schedule. Anyone who has had a child this age has probably experienced the primal needs of a toddler, and their unwillingness to be predictable in this regard. Doing it as a single parent, with an uncertain future, and in the state of deep grief, well, it's a burden to say the least.

But the universe is not finished with laying challenges at her feet. The doorbell of the house, an angry growl of a ring-tone, keeps going off at night, and the neighbors down the shore have an outwardly friendly manner of invading personal space that is unsettling, and paranoia inducing. Lowan's penchant for wandering off (as toddlers do), and the panic of his constant disappearances extracts a steep emotional toll.

Beth, slowly developing dark circles under her eyes, tries to handle the day to day household tasks, something the film delights in using as a metronome for building its creepy aria playing just under the surface. She tries to lose herself in her paint-marbling art, a practice of making swelling, manipulatable paint designs on the skin of water made viscid via carrageenan extracted from seaweed and transferring them to paper. Her art and its photogenic process is featured prominently, bewitchingly filling the frame to act as an abstract overture of sorts; one which rhymes with the water and seaweed on the beach surrounding the films location.

In the fine tradition of modern-classic horror pictures such The Shining (the sharp-eyed viewer may look for a specific and canny Shelly Duvall moment) and Carnival of Souls, Smith sets the stage early, but allows off-kilter domestic rhythms and controlled audio-visuals to slowly reveal the spaces the characters find themselves. To get a little more recent, there is a hint of Jennifer Kent's The Babadook in there as well, with acute single-parenting strain, and even a disturbingly illustrated children's bedtime story being read at one point.

While tipping a hat to the peaks of the form, however, being aware of what has come before provides an able springboard for the confluence of technical innovations and ideas on display here. Smith's nano-budget, crawl through the maritime mud, moss and starfish-extract, first feature, Lowlife, hinted towards this kind of distinct, creative wellspring, and his environment-headspace sensibilities come into full bloom in The Crescent.

The craft here, put to effective use, creates a kind of a fugue state in the audience, punctuated with moments teasing out the horror. This is a chiller, not a thriller, that traffics in goosebumps and held breath over rote jump scare shenanigans. Outside of mother-son interactions, the dialogue often veers into pure expositional function; says one creepy old Nova Scotian seaman: "Once here, people find it hard to leave."

The filmmaking withholds from the audience the complete toolset to understand entirely what is happening, and thus the second strata of meaning just below the surface quietly floats. A second viewing of the film reveals how coyly playful the screenplay manages to be, lest one think that Smith and company lack a sense of humour. It trusts that the mother-child bond will be the tie that binds the audience to the horror story.

It has to be brash, or foolhardy, to shoot a feature film with a lead actor who is only 3 years old. Woodrow Graves is a fiercely original protagonist, and a testament to the skill of the director (and Graves' actual father) that this was even possible - let alone as deeply engaging as the child's on-screen presence allows for observing the world in a sui generis way.

The film uses a dazzling array of aspect ratio changes to establish the headspace of Beth and her child, from postcard, Polaroid squares in the centre of a vast screen, to thin claustrophobic portraits. Perhaps fellow Canadian auteur Xavier Dolan, who effectively brought aspect ratio directly into the text of his depression drama Mommy, was an inspiration to what Smith is doing here. It is unquestionably a marvellous step forward in how framing - literal matte-ing - can propel narrative, and how film (and reality) can be trapped in or break (or bleed) out of the frame.
Much of the genre-crowd may be compelled to flee from Smith's deliberate dream-like plotting (shades of Eraserhead), which comes in like the nighttime tide. The right (midnight) audience will cherish that horror filmmaking can still be this elegant and flush with emotional intelligence through craft.
Review originally published during the Toronto International Film Festival in September 2017. The film will open in seven cities (Toronto, Vancouver, Edmonton, Calgary, Halifax, Winnipeg, Montreal) on August 10, plus a special screening in Ottawa on August 15. It will be available on VOD, Amazon Prime and iTunes on September 4.
Tweet Post Submit

Do you feel this content is inappropriate or infringes upon your rights? Click here to report it, or see our DMCA policy.
CanadaDanika VandersteenmaritimesNova Scotiapaint marbellingToddler

More about The Crescent