Notes on Streaming: India's SACRED GAMES Could Be Netflix's Next Big Winner 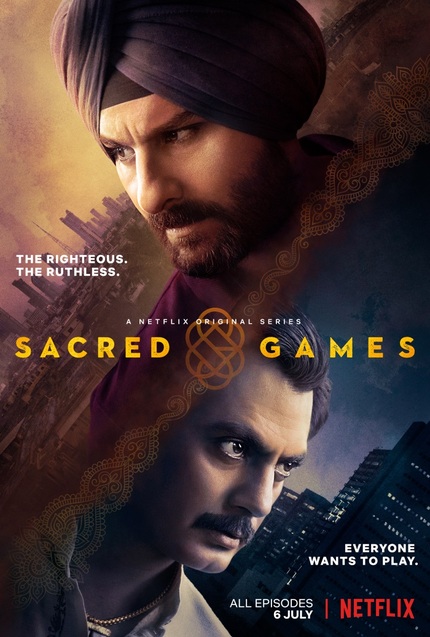 This Friday, July 6th, Netflix launches its most ambitious project out of India to date, the Anurag Kashyap & Vikramaditya Motwane directed miniseries Sacred Games, based on the hit novel by Vikram Chandra. The company has had a strong foothold in India since it's global launch in January of 2016, acquiring major Bollywood blockbusters, making deals with big production houses like Shah Rukh Khan & Gauri Khan's Red Chillies Entertainment (home of many SRK hits from the last two decades), scouring the festival circuit for independent favorites, and adding favorites from regional film industries, particularly the Kerala based Malayalam language industry.

In addition to these acquisitions, Netflix has recently begun commissioning original content. They have experimented with stand up specials from comedians like Vir Das and Aditi MIttal, original features like the Hindi language Love Per Square Foot and the Tamil language Sila Samyangalil (Sometimes), and now Sacred Games marks its first foray into original serialized content, and it's a biggie.

The novel by Vikram Chandra was a huge hit upon its release in 2007, Sacred Games is a story of cops and robbers, exploring the seedy underbelly of the Mumbai crime world and its connections to power at every level.

Not a company to half-ass anything, Netflix partnered with Phantom Films, the company co-founded by directors Anurag Kashyap, Vikramaditya Motwane, Vikas Bahl, and Madhu Mantena to get the production going and the results so far have been stunning. The series was adapted to the small screen by writers Varun Grover (Masaan), Smita Singh, and Vasant Nath who managed to wrangle Chandra's 900-page sprawling epic into a slightly less sprawling, but no less engaging limited event series. All eight episodes of the series are co-directed by Kashyap and Motwane, presumably based on availability and content as both filmmakers are like sharks who never stop working on features and both had major releases on their own over the last 8 months.

Sacred Games centers around three main characters, a gangster boss named Ganesh Gaitonde (Nawazuddin Siddiqui), and beat cop named Sartaj Singh (Saif Ali Khan), and a RAW agent named Anjali Mathur (Radhika Apte). Siddiqui's Gaitonde is a Godfather of the Mumbai crime world, an all-powerful boss who has reappeared after years in exile to lure low-level cop Singh into his web of high-stakes crime and intrigue. RAW, which is India's answer to our FBI/CIA, gets involved when Gaitonde's plans turn out to be bigger than the Mumbai cops can handle, inciting the typical jurisdictional tussle between the two agencies as the story moves along.

For those unfamiliar with Bollywood, India's many film industries and never-ending output can be incredibly intimidating. Film length, cultural specificity, unique tropes of masala filmmaking, and unfamiliar performers all play a part in alienating the general western audience from a world of fascinating films. For example, when Netflix acquired streaming rights to Kashyap's 2012 critical hit Gangs of Wasseypur, they re-edited the film to fit into 8 chapters rather than the original two features in order to make the five-and-a-half hour run time more manageable.

In the case of Sacred Games, the project was conceptualized as a series, meaning that no re-editing is necessary, and the results work beautifully. We've had a chance to preview the first four episodes, and the difference between a film reformatted for serial viewing, and a project started with serial viewing in mind is like night and day. Each episode focuses on one aspect of Gaitonde's mystery and the way it connects to not only Singh and Mathur, but also the many well-defined supporting characters. Sacred Games is incredibly bingeable as well, a lesson well learned by the team behind the project.

In addition to the leads, a trio of solid actors, two of whom have made my "Best Of" lists in past years (Siddiqui in 2012, and Apte in 2016), Sacred Games employs a ton of familiar faces, many of whom are among India's finest working actors. The series format allows these actors extended opportunities to shine beyond the blink-and-you'll-miss-them roles they often get in features. Actors like Neeraj Kabi (Detective Byomkesh Bakshy), Girish Kulkarni (Dangal), Vibhawari Deshpande (Deool), Rajshri Deshpande (Sexy Durga), Surveen Chawla (Parched), Pankaj Tripathi (Newton), and Geetanjali Thapa (Liar's Dice) make strong impressions on screen. It's like a who's who of Hindi and Marathi character actors all getting a real opportunity to make an impression. Even Saif Ali Khan, who is known as a big Bollywood hero who doesn't often have to do much capital-A, "Acting", does some of his best work in a role that puts him more as part of an ensemble than as leading man.

India's film industries have never shied away from stories of the underworld, but they've been hamstrung - especially in recent years - by an overzealous censor board. By going directly to Netflix, Sacred Games is able to bypass the censor board and the results are at times edgier than Indian features can permit. While the film isn't exactly sleazy, this additional freedom allowed by going to a streaming service does provide for some more intense portrayals of both sex and violence on-screen and Kashyap and Motwane have capitalized on that, giving the people what they want and bringing Indian content more in line with the creative freedoms enjoyed by adult cable series in the West.

There were many of us who saw Kashyap's Gangs of Wasseypur as the potential dawn of a new era in international visibility for Indian cinema, and to a degree it was. However, wildly staggered international release dates and delayed streaming access meant that the film took several years to roll out to some of the world's biggest markets. The content was there, but the buzz had faded as the film looked for international buyers. With Sacred Games, Netflix is taking a solid step toward the watershed moment India needs to truly compete on an international level. With the same vibe as Wasseypur, but bigger stars, more relatable content, and a more digestible format, this could be the big moment for both the Hindi film industry and Netflix India's first true international success story. I know I can't wait to see how the story plays out, and I'm betting that you'll be hooked after the first episode.