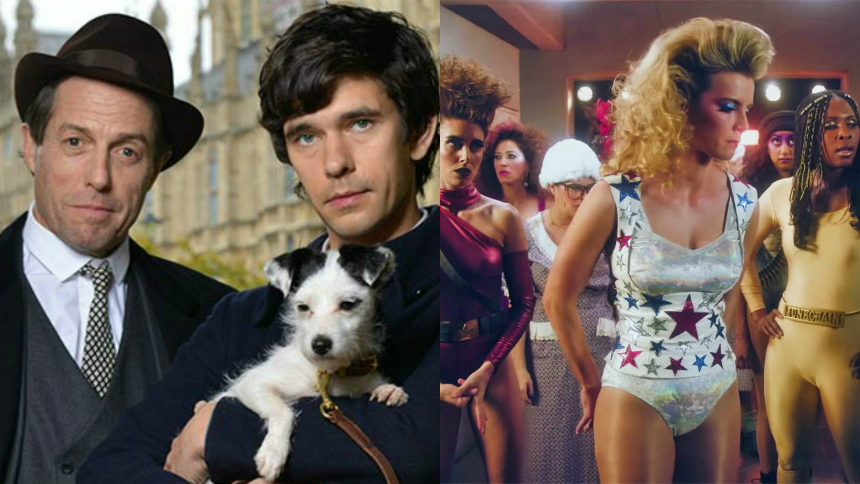 The most frequent complaint about Netflix is that their flood of new series all have too many episodes that are all too long. Here is my two-pronged solution: (1) try another streaming service; (2) watch shorter shows with fewer episodes.

On the Amazon Prime streaming service, for example, I recently watched A Very English Scandal, even though I live in the U.S. and have only visited England once, owing to my chronic lack of funds and/or available time to jet off to a country where English is the primary language. (Also my excuse for not visiting Canada.)

The series, neatly divided into three episodes, each running 56 minutes, debuted May 20, 2018 on BBC One (and on Amazon Prime on June 29, 2018). The most notable aspect of the production is undoubtedly Hugh Grant's extraordinary performance as Jeremy Thorpe, though the scripts by Russell T. Davies (Doctor Who) are exquisite and the direction by Stephen Frears (most recently Florence Foster Jenkins and Victoria & Abdul) is snappy and sympathetic.

In an interview with Radio Times, Grant said about his casting: "I've always tried to take whatever was the most entertaining thing in front of me at the time. But it probably is true that getting older and uglier has made the parts, you know, more varied."

Now 57 years of age, Grant is not exactly burnt toast, but he looks his age -- two years older than Tom Cruise -- and is not afraid of the calendar. That enables him to bring his considerable experience to the role of Jeremy Thorpe, a British politician who was a member of Parliament when he began a relationship with Norman Scott (Ben Whishaw) that turned from sweet to sour to very very sour over the years.

Thorpe is a completely engaging personality, a charming sort who is almost a prototypical politican, in that he comes across as a friendly fellow with firmly-held beliefs who can express himself well in public, and, at the same time, is fully open to the idea of compromising his personal beliefts in order to get ahead. Thus, he is quite cognizant that any sexual activity between men is illegal and so takes steps to keep a tight lid on his private relationships.

In contrast, Norman Scott, as magnificently portrayed by Ben Whishaw, is far more open and up-front about his own needs ... eventually. It takes him a while to get there in the repressive society in which he lived, but once he does, he is loud and proud and altogether irritating to Jeremy Thorpe, who eventually decides there is only one way to end what he views as Norman's constant pestering about getting a national health card.

It all adds up to a very pleasing historical drama that constantly feels alive and timely, given that the same issues echo throughout the world today. For those, like myself, who are completely unaware of the true-life events that inspired the series, I will refrain from any further detailing, but I imagine that even those who are fully aware of those events will enjoy the series, which is fleet-footed even as it spins through the years. And it's only three episodes, which makes for an easy binge.

The series is now available to stream via the Amazon Prime service. 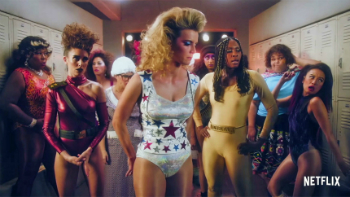 As much as I feel unqualified to review A Very English Scandal, I feel even more so unqualified to review the second season of G.L.O.W., this time because I am a man and most of the show is told from the perspective of women in the 1980s, when dinosaur-like men ruled the world, stomping around like wounded beasts expecting everyone to do what they're told. So, please don't consider this a formal review, but this season is so good that I feel compelled to share a few thoughts from my limited perspective.

In my consideration of the first season, I noted that "the predominant themes focus on the women as they deal with changing circumstances. Can they maintain (or develop) their individual identities? Does putting on costumes and enacting carefully-choreographed routines hold out any hope for creative or personal fulfillment?"

The new season develops those themes further, initially focusing on Ruth Wilder (Alison Brie) and her continually stymied attempts to add creative flourishes to the televised wrestling show that forms the backbone of the piece, all over the loud, stupid, manly braying of director Sam Sylvia (Marc Maron).

But then we come to an episode in which the show's star, former soap opera stand-out Debbie Eagan (Betty Gilpin), finally comes to grips with the end of her longtime marriage and starts taking decisive action to establish a new beginning for herself and her baby. And then we see the so-called "Welfare Lady" (Kia Stevens) finally confess her wrestling identity to her disbelieving son, who has just started college. And then ...

Well, suffice it to say that this series maintains a pace that never feels hurried yet always pushes forward relentlessly, making it very easy and pleasurable to binge, especially since the episodes never last longer than needed (usually less than 30 minutes) to get the individual story and/or character point across and leave the viewer wanting more.

That's a rare quality in narrative storytelling in general, especially on Netflix. The series remains highly recommended -- check it out!

Notes on Streaming focuses on new and original programming that is legally available on various streaming services.