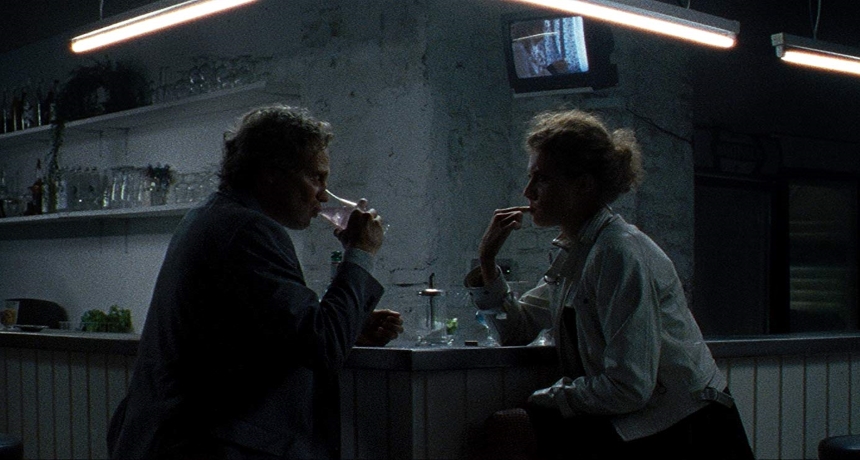 A demon or some kind of evil entity travels from a Chilean boarding school to a German Police station to ensnare the woman it desires to possess. The simplicity of the basic story kernel belies the stylish and convoluted manner in which things are told in Tilman Singer's debut feature film, Luz.

Confidently shot on 16mm Kodak film in an ultra-wide aspect ratio, using a calibrated patience to let things unfurl on screen, and, if you are into it, inside your mind. The aim here is less of clarity, but rather to induce a state anxiety and confusion. It is so effective in this regard, that it both left me behind, narratively speaking, and made me lean in at the same time.

Luz is told as a fractured narrative, and a series of vignettes, that simultaneously begin to fold in on each other. A lost and injured Latin American woman, Luz, wanders into a German police station. Struck by the stillness and solitude, the emptiness and the quiet, she screams, "Is this how you want to live your life," at the desk sergeant. The opening scene could be straight out of an Apichatpong Weerasethakul film, with its arty composition, nearly motionless protagonist, and mundane bureaucratic interiors.

Cut to a bar where a well dressed man and a woman with a story to tell flirt over the increasingly outlandish story of her chance encounter with a former schoolmate from her troubled life in Colombia. Luz, who now works as a cab driver, jumped from her vehicle while it was moving after seeing her old friend. This scene, pure in dialogue and body language, is both a stand out sequence of letting two actors command a scene, and the calm before the storm. It is my favourite in the film of drawn out long takes, precise framing (mise-en-scène for the cool kids) and dripping sexual cues. It evokes an equally riveting scene of flirtation and unspoken chemistry at the beginning of Christoffer Boe's magic-act of meta-cinema, Reconstruction.

While I might be able to compare some of the elements of Luz to other, decidedly arthouse things, the complete package here is wholly its own beast. And here, it is the journey not the destination. It is punk rock (the invocation/mantra/refrain here is "Our father, why art thou such a dick?"). It is very much an experimental actors workshop. But it is surely a vapourous genre-freak-out. (It is also a period pice, set in, perhaps, the late 1980s, but is not fussy about the specifics.)

Things culminate in a kind of interrogation (or seance?) in the middle of the police station's largest conference room with the Luz, a therapist (the well dressed man from earlier), an aloof detective, and a translator. The scene is a cocktail of Spanish and German, which makes for reading English subtitles a bit...interesting -- an unintentional, but effective, added layer of disorientation. So much for the vaunted 'German efficiency,' but the entirety of the surreal experience is used for a deeply compelling (and delightfully ambiguous) cinematic purpose. The movie wants to both fuck you, and fuck with you.

As the detective and therapist try to extract past circumstances from Luz (was there a even a crime, beyond desire?) via hypnosis, the police station transforms into an smokey fever dream of Luz's several past brushes with her demon, or simply abuse in the school system, which as been following her, now and then. As unconventional exorcism sequences on film go, and Luz is almost a reverse of the process, this one is up there with Hong-Jin Na's The Wailing. Instead of folklore and forest and fire, it is a German conference room, with ordered rows of chairs and analogue audio recording, but that in no way dilutes the sheer madness of the thing.

The reactions of the technician/translator as the situation rapidly gets out of control are priceless (and give the audience an in, as things get increasingly weird), but comedy is not really in the visual vocabulary here, it is more sensory and abstruse. Luz is the kind of filmmaking that is disturbing precisely because it is confusing, and it aims to pull you down the into vortex of the writer-director's headspace. In the inevitable conversations that occur after witnessing a film such as this, I have heard intimations that the film is about love. I do not subscribe to this. I think the film is about sex, the zesty and sweaty kind. It is about possession, figuratively and literally, in the most toxic of ways. And this movie invites its audience to be complicit in its crimes.