Cannes 2016 Review: THE WAILING, A Bone-Chilling, Thunderous Descent Into Hell 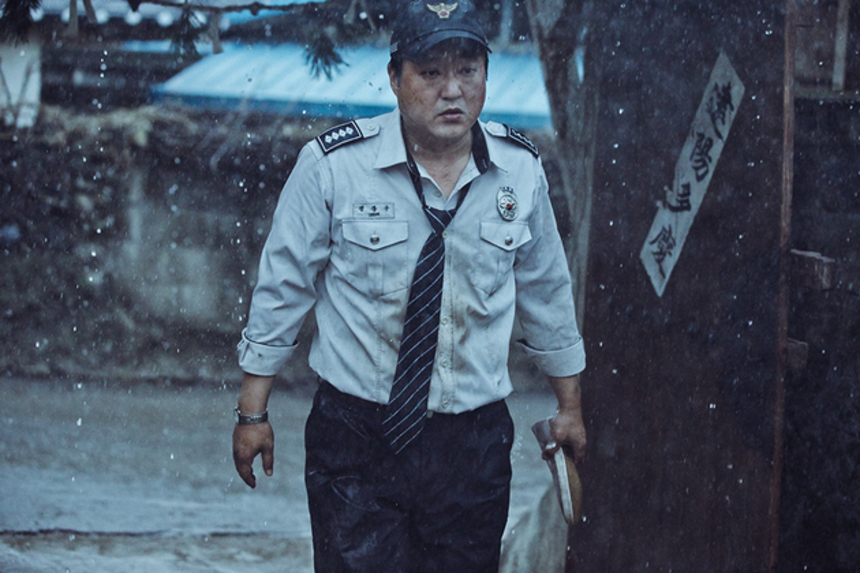 After turning the Korean thriller on its head with The Chaser and The Yellow Sea, director Na Hong-jin has reinvented himself again, aggressively pushing against the boundaries of genre cinema with The Wailing. A deafening descent into hell, it may also be the best Korean film since Lee Chang-dong's Poetry.

Gokseong, the Korean title of the film, is a small Korean town deep in the countryside that becomes plagued with strange and violent deaths. Jong-goo, a local officer, is helpless in front of the terror and illness that is slowly gripping the town and fears the worst when his own daughter becomes sick. A mysterious Japanese man draws suspicion from the townsfolk and while Jong-goo attempts to investigate the reason for his appearance in the area, he also employs the help of a shaman to deal with his daughter as her condition worsens.

While many elements link the film to Na's past work, such as its pessimistic worldview, subversive use of genre codes and mounting momentum, The Wailing sees the filmmaker build on his past successes. He inures us into a uniquely dark atmosphere, gradually involving us in its seeping, pestilential sense of dread and foreboding before gradually cranking up the tension to unbearable levels throughout the film's 156 minutes, a running time you'll scarcely believe has elapsed when the lights come back on.

Unlike the set-based exactitude of fellow Korean cineastes Park Chan-wook, Bong Joon-ho or Kim Jee-woon, Na's mise-en-scene (which includes cinematography duties by Snowpiercer's Hong Kyung-pyo) is less obviously stylized and he opts for rundown, realistic locations, yet he's no less meticulous. There is much to admire in Na's aesthetic choices, but they don't draw attention the way they might in other films. This makes The Wailing feel like it happens in a real place, which ups the ante considerably as things slowly spiral out of control. Many sequences are introduced by stunning establishing shots of the countryside or creeping images of dilapidated homes, and the tone and colors of these continuously shift throughout the film. Na also shot a good chunk of this late summer narrative in winter, to add a subtly disquieting effect to night scenes.

As a mystery, The Wailing is deeply unsettling and resists obvious solutions or twists as it allows evil to swallow the narrative whole. As much as it is a result of the intricate mise-en-scene and hypnotic performances, the film's effect is also a result of its unusually long editing process. Na spent over a year fine-tuning the film, and it shows. From the minute attention to color grading that results in the most beautiful and terrifying images of the Korean countryside ever put to film, to breathtaking parallel-edited sequences that should probably come with a warning to anyone with a heart condition, editing is a tool of paramount importance to Na, and in his hands, it is a fearsome beast.

In the lead role, Kwak Do-won (The Attorney) takes the hapless local cop we've seen so many times in Korean films and turns him into a helpless man whose life crumbles around him in the face of pure madness. The humor and pathos we expect is there but he also adds a darker tint to the role, drawing us in with his portrayal of utter desperation. Though he gets second billing, Hwang Jung-min only appears very late in the narrative as the shaman, yet the pure physicality of his performance leaves a deep impression. Introduced with a cacophonous musical interlude, he is commanding in his hypnotic ritual scenes. Chun Woo-hee (Han Gong-ju) and Japanese star Kunimura Jun (Outrage) also provide great support as mysterious fringe figures.

Like The Yellow Sea, when the action really gets going it never lets up. Na completely undermines what we thought we knew about genre films again and again and for a good 40-minute stretch you may have to remind yourself to breathe. A dizzying and stunning accomplishment, The Wailing elevates genre to an art form.

Seen at a press screening in Seoul on May 3.