Notes on Streaming: THE HOLLOW, Unraveling an Animated Mystery 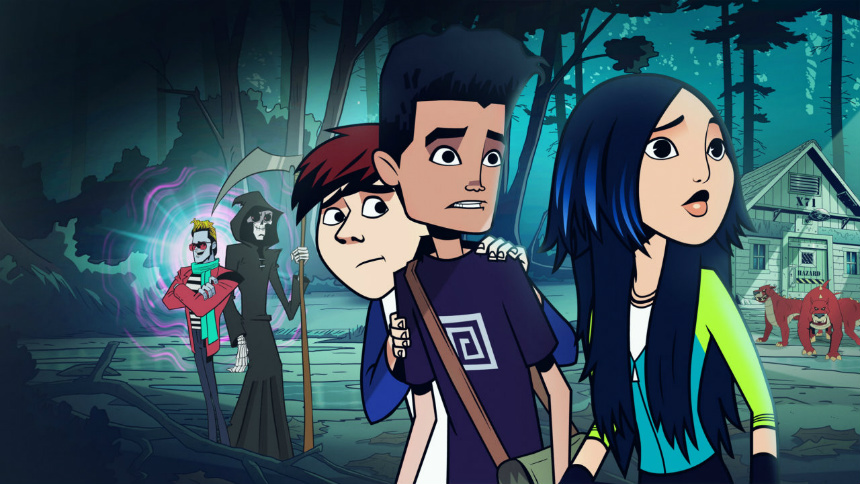 The opening scenes of The Hollow reminded me of the opening of Zork, one of the first text-based computer games. Back in the early 1980s, I remember eagerly buying the game and staring at the opening line, white text on the black computer screen: "You are standing in an open field west of a white house, with a boarded front door." I was stumped, and never did get very far.

Happily, the three young, primary characters in The Hollow are far more intelligent than I have ever been. They awaken with no memory in a bunker constructed of large stones. They don't know each other and have no idea why they are trapped in the bunker, with only a manual typewriter to keep them company. Very quickly, however, they figure out how to escape, thus embarking on a grand adventure that will span all 10 episodes of the animated Netflix Original series.

The series is aimed at pre-teenagers, but I very much enjoyed the animation style (big and blocky, with funny feet) and the mysteries the kids must solve in each episode. That includes puzzles as well as learning their own strengths and weaknesses, as they get to know each other and decide if they can truly rely upon or trust the other. They display a rich sense of juvenile humor that bolsters the interplay between them as the series progresses and makes a binge-session quite enjoyable.

Adam (voiced by Adrian Petriw) assumes a leadership position among the trio, almost by default; he is decisive and empathetic, while quickly displaying superpowers that get them out of jams quickly. Mira (voiced by Ashleigh Ball) also manifests superpowers that are extremely helpful, while Kai (voiced by Connor Parnell) is, initially, more of a complainer without any special abilities. In time, however, his superpower becomes apparent, and his character imperfections make him relatable and believable, even as he himself grows over the course of the series.

Buoyed by a generally positive and cheerful spirit, the series darkens at times as challenges arise from a multitude of different monsters, such as devil dogs, witches, minotaurs, and zombies, as well as a rival gang of kids who create an entirely new set of mysteries for the original trio to solve. They are also plagued and/or aided by a very strange fellow they refer to as The Weird Guy (voiced by Mark Hildreth), who can transport them through different portals in the very strange universe in which they have been ... well, dumped, is the best description.

Slap Happy Cartoons is the company behind the series; they identify the show as being aimed at kids aged 8-12. I guess I'm just a big kid at heart, because I thoroughly enjoyed 99% of this animated series, which is now streaming on Netflix.

Notes on Streaming covers original movies and series that are available legally on streaming services.

Do you feel this content is inappropriate or infringes upon your rights? Click here to report it, or see our DMCA policy.
Adrian PetriwAshleigh BellConnor ParnellMark HildrethNetflixSlap Happy Cartoons