Notes on Streaming: THE NEW LEGENDS OF MONKEY Childishly Delights 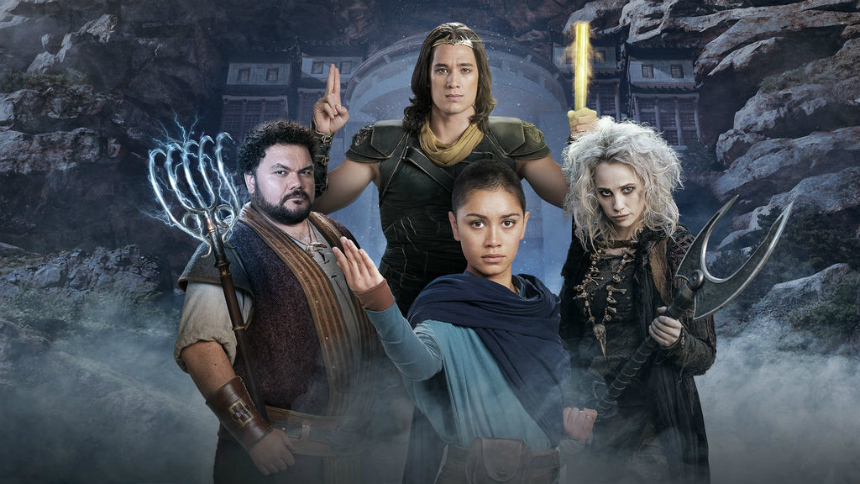 Inspired by the Japanese television drama Monkey (1978-80), which in turn was based on the classic Chinese novel Journey to the West, the Netflix series The New Legends of Monkey starts off with a lot of cultural baggage, which it casually flings off by the end of its first episode.

As in the Japanese show, the Australian series features a woman in a lead role as Tripitaka, a young priest who releases Monkey, aka The Monkey King, after 500 years of imprisonment. They journey to the West in search of holy scriptures and have many adventures, accompanied by Sandy and Pigsy, two gods who have kept their true natures in hiding.

The original Japanese series was evidently quite popular in Australia, and so the new show captures a different flavor with its casting: Monkey is played by Chai Hansen, an Australian-Thai actor; Tripitaka is captured by Luciane Buchanan; an actress of Tongan heritage who was born in New Zealand; Pigsy by Josh Thompson, also of Tongan heritage; and Sandy by Emilie Cocquerel. As to any accusations of "whitewashing," writer/director Craig Irvin points out that the show is set in a mythical world, rather than China, and that more the half the diverse cast is non-European.

What's important to note as well is that the series is aimed at younger viewers, aged 8-12 years of age. So the fight scenes are brief and not particularly bloody, and the overall tone of the series is very, very light and playful. Combined with the running time -- about 23 minutes per episode -- it was very easy to binge the 10 episodes in just a couple days.

The first three episodes serve as an introduction to the world and the characters. After a somewhat serious first 15 minutes, explaining that the gods have gone into hiding and that everyone lives in fear of nasty demons, the true, far more goofy nature of the show is revealed, and then it's smooth sailing.

Second-billed Luciane Buchanan easily carries the lion's share of the drama, anchoring the show in the believable terror of a young woman coming of age in a wildly unpredictable world. Her confidence shines through, allowing her companions to indulge in their often silly shenanigans; yet she too shows her hesitations without being overcome by them.

Gerard Johnstone, who directed the horror comedy Housebound, helms the first four episodes with a light touch, and alternates with Irvin as director. It adds up to a delightful experience that I thoroughly enjoyed.

The New Legends of Monkey is now available on the Netflix streaming service.

Notes on Streaming covers films and series that are available on legal streaming services.

More about The New Legends of Monkey