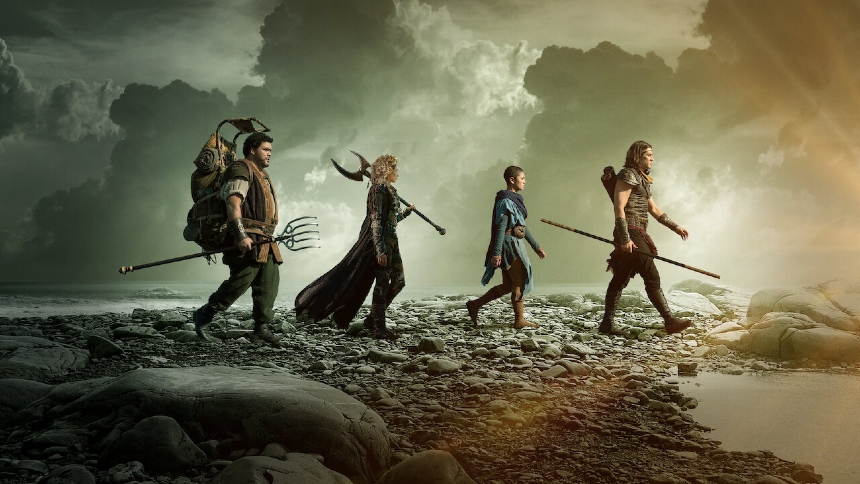 For business reasons, Netflix would prefer that you watch its streaming service (and nothing else) 24 hours a day, 7 days a week, binging every season of every series available now. And then watching every show you've seen before again and again, ad infinitum. This would please the almighty algorithms no end!

The New Legends of Monkey
The first two seasons (20 episodes) are now streaming on Netflix worldwide.

For personal reasons, however, I prefer to savor things that I enjoy. Sometimes, that means I do not watch every episode when a new season drops (aka 'binge-watching'), especially if I've already seen and enjoyed a previous season.

Thus, over the weekend, I watched the first two episodes of Season 2 of The New Legends of Monkey, which brought the young child who lives inside my brain and body considerable delight. I am not in any hurry, though, to gobble up the remaining eight episodes (all running about 30 minutes), because then they will all be gone and I won't have anything else that is guaranteed to tickle me in quite the same pleasure spot.

As I noted in my consideration of Season 1, published in May 2018, the series is "aimed at younger viewers, aged 8-12 years of age. So the fight scenes are brief and not particularly bloody, and the overall tone of the series is very, very light and playful." That continues in Season 2, at least in the first two episodes, and I don't expect that to change.

Set in a mythical world, the new season continues to feature a small group of heroic characters: "Monkey is played by Chai Hansen, an Australian-Thai actor; Tripitaka is captured by Luciane Buchanan; an actress of Tongan heritage who was born in New Zealand; Pigsy by Josh Thompson, also of Tongan heritage; and Sandy by Emilie Cocquerel."

My favorite cast member remains "Luciane Buchanan, [who] easily carries the lion's share of the drama, anchoring the show in the believable terror of a young woman coming of age in a wildly unpredictable world. Her confidence shines through, allowing her companions to indulge in their often silly shenanigans; yet she too shows her hesitations without being overcome by them."

Admittedly, The New Legends of Monkey is rather a goofy show, but it fits nicely for me into my memory banks alongside Xena: Warrior Princess (1995-2001) and even Hercules: The Legendary Journeys (1995-1999), two series with a modest sense of humor and a similar taste for adventure. It's a grand journey that is worth the time to savor, in my estimation.

Do you feel this content is inappropriate or infringes upon your rights? Click here to report it, or see our DMCA policy.
AustraliaJourney to the WestMonkeyNetflixNew Zealand

More about The New Legends of Monkey