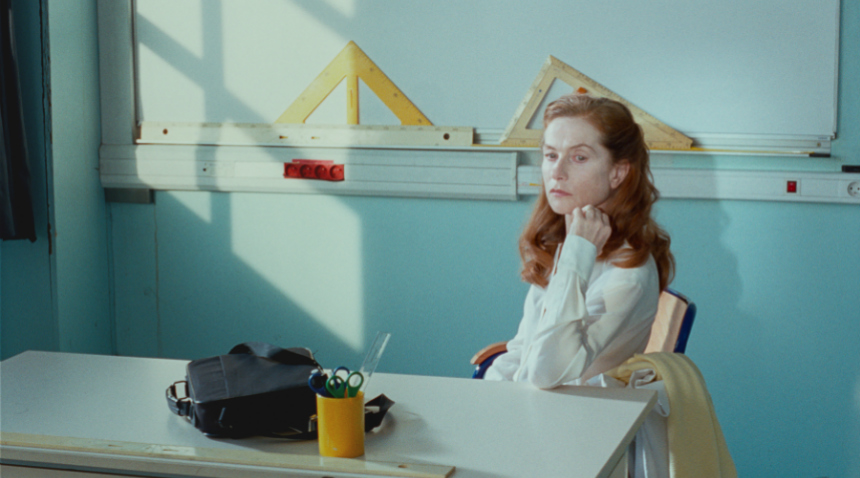 Serge Bozon's idiosyncratic WWI musical comedy La France impressed me when I watched it some years ago. In it, he demystified war heroics and masculinity with his deadpan humor. In Mrs. Hyde, in his peculiar way, Bozon takes jabs at the failing education system where intelligence is willfully ignored and pent up rage and anger simmers just below the surface.

The indomitable Isabelle Huppert plays Marie Géquil, a soft spoken, extremely ineffective Physics teacher in a rough suburban school where most of her students in her vocational class are comprised of rowdy, uninterested students of color. They incessantly make fun of her and scold her and have zero respect. But always good natured, Marie tries to get through to them, especially Malik (Adda Senani), her worst tormentor who's handicapped and relies on crutches for walking, even though no one gives him the light of day. At home, she is greeted by Pierre (Sergio Garcia), a supportive, teddy bearish, stay-home husband who cooks elaborate meals and plays music for her but doesn't quite understand what she goes through day after day.

She takes solace in her laboratory in a trailer in the school lot after hours where she deals with complicated blinking machines and math equations. One day she is hit by lightening in the trailer and becomes an occasional red-glowing night crawler.

Things change after the incident. Having more confidence in herself (as the energy visibly moves through her vain), she finally gets through Malik, despite objections of favoritism by do-good students (two white girls who always talk in unison in class). With the laws of reflection, not only she shows the path from Point A to Point B, she shows him how to stop and think. But despite the breakthrough, Malik still wants to belong to a street rap group made of school dropouts. In her sleep walking glowing form, Marie ends up frying one of the rappers in front of Malik one night.

I can watch Isabelle Huppert picking her nose for two hours, no problem. She's done comedies before, but in Mrs. Hyde, her performance is completely against her type and it's still mesmerizing watch. Romain Duris, playing smarmy, self-loving, small time principal here represents, along with an uppity 35-year old teacher-in-training, the clueless establishment.

I didn't expect a biting, timely social commentary from Bozon and from Mrs.Hyde. Unlike Robert Louis Stevenson's Jekyll and Hyde, Bozon's two faced, mild mannered school teacher parable has a lot more to do with the society we live in - which lacks self-determination, individual thoughts, and honestly, is more and more very much anti-intellectual. Dangerous Mind it's not. The film shows us that we have responsibility to teach our new generation faced with a lot of problems and distractions to stop and think for themselves. That they can't rely on a savior ('white savior syndrome' that is prevalent in popular culture) because that will eventually burn you. I was mildly and pleasantly surprised by the audacity of Bozon's moral lessons that digs deeper while maintaining his brand of deadpan comedy on the surface.

Mrs. Hyde is a social commentary that packs a punch wrapped in a screwball comedy form. Highly recommended.

Review originally published during the New York Film Festival in September 2017. The film opens on Friday, April 27, 2018 at The Metrograph in New York City. Please visit the official site for tickets and more information.