The year in which the Mexican Senate came up, out of nowhere, with the National Day of Mexican Cinema, a joke that - rather than an initiative of promotion and recognition - ended up being a vile movie marathon at Cineteca Nacional of overused contemporary films. Was it really necessary to screen yet again Güeros and The Amazing Catfish?

The year when it was presented the governmental program Ruta MX, which failed spectacularly to the promise of premiering 80 films supported with public money within 12 months.

The year that saw the new administration of the Mexican Academy starting on the wrong foot, as its president, director Ernesto Contreras, presented at a press conference a workplan full of intentions rather than real proposals; as well as announcing that he was going to register his own film, Sueño en otro idioma, in order to look for Ariel awards nominations.

Another year in which film festivals around the country emerged and died without any repercussion.

Another year of discussions on the subject of distribution and exhibition of national cinema. Does someone know the real motive of why The Untamed remained in distribution limbo for so long? Why El sueño del Mara’akame was screened with a huge watermark as if the CUEC didn’t want the audience to watch it? Which is going to be the strategy of the La 4ª Compañía directors after rejecting the rules of the distribution company that was going to support it?

Another year in which a sector of the press lazily blamed the Souzas, the Higaredas and the Derbez of all the misfortune of our cinematography.

In the midst of this panorama, 12 original and personal movies emerged and talked about the country from different angles and genres. Here are the remains of 2017. 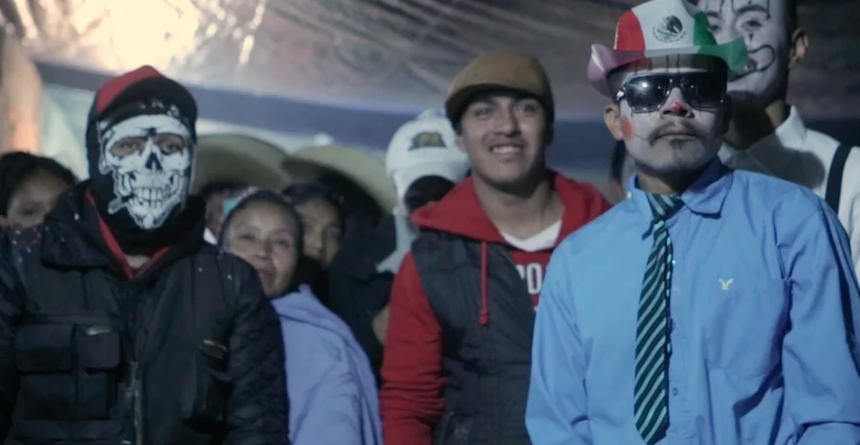 First-time documentary maker Santiago Maza Stern uses the five days of the “patronal” celebration in the town of San Juan de la Vega, Guanajuato, to show how traditions are transformed and adapted to the current times. A costumbrist portrait of a community but also an exciting western in which the men that protect the law are totally surpassed but nevertheless remain stoical, the film talks about religious syncretism and fervor until the crucial moment appears: the arrival of some sort of modern outlaws, who are involved in gunpowder traffic and who also want to celebrate… in their own way, turning the streets into a thunderous battlefield. One of those movies that are programmed at film festivales without any publicity and end up being authentic revelations. 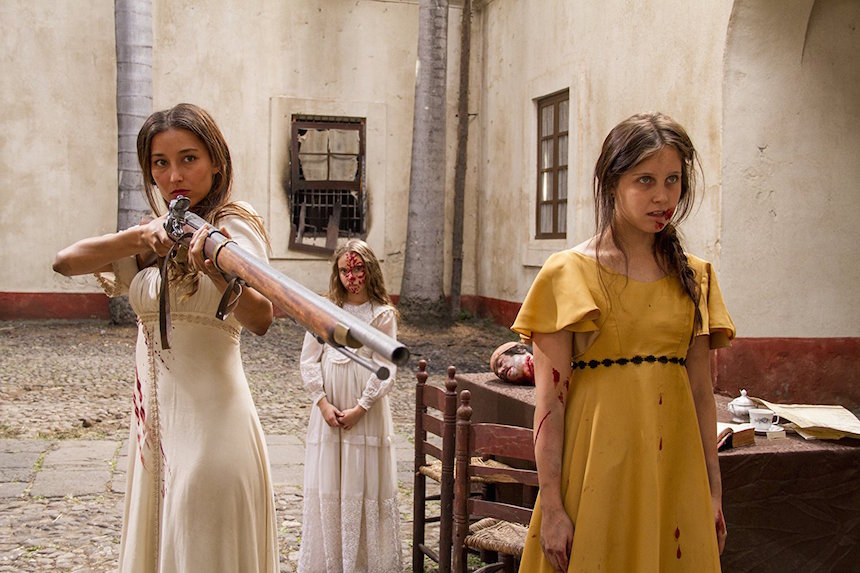 While a whole litter of young horror directors are insistently trying to make the most violent, extravagant or transgressive film, veteran Juan Antonio de la Riva - with his first effort in the genre - decided to make an old school movie without any visual grandiloquence, taking seriously a premise that involves zombies and Haitian voodoo, set in the Mexican War of Independence, and influenced by the spirit and atmospheres of such classics as El vampiro and El escapulario. Sure, the music feels artificial and some performances are not entirely convincing, but in general the film holds up well, and we don’t need to find forced attributes in order to proclaim de la Riva as our new master of horror. 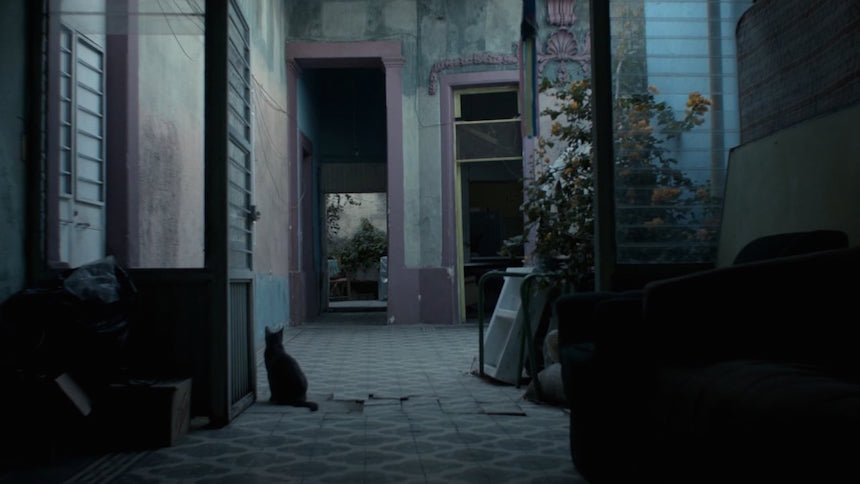 The portrait of the everyday nature of five roommates in their late twenties, who share the space of a big and dilapidated house in the city of Guadalajara - where first-time director Sofía Gómez Córdova actually lived at some point of her life -, perfectly describes the ethos of a generation permanently overwhelmed by the adult world and independence, while yearning for a still clear past. The tone of bittersweet humor, very close to the one achieved by Samuel Kishi Leopo’s We Are Mari Pepa - another film about adolescent uncertainty in which Gómez Córdova has a credit as a screenwriter -, and the fresh faces that it presents, work and make us feel empathy for these characters. 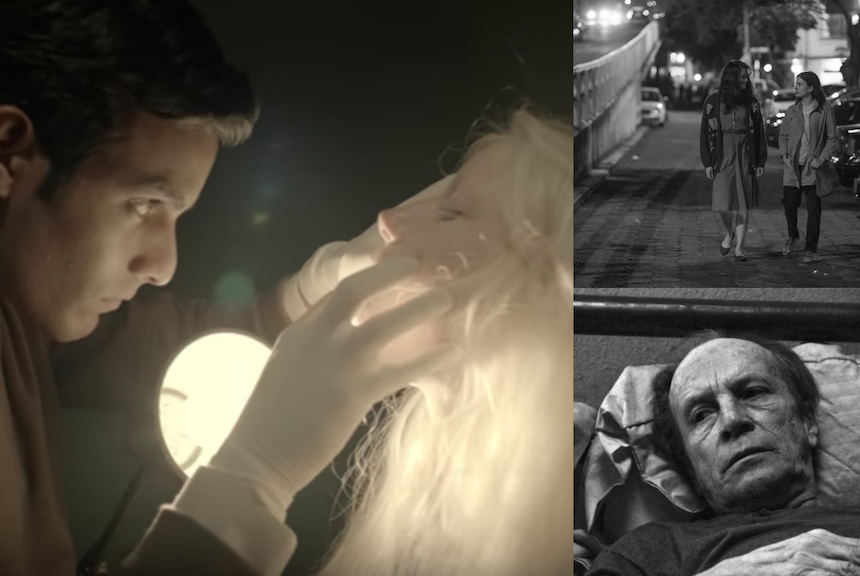 2017 was a singular year for Mexican genre cinema. Curiously, some of the most interesting efforts didn’t emerge from the usual festivals of the speciality, rather from Guadalajara and Morelia, and coming from the less expected directors; considering the previous works of both Rául Fuentes and Gabriel Mariño were minimalist dramas about loneliness and lack of communication, while Luis Ayhllón made a couple of urban comedies about outsiders.

Taking thematic elements of the fantastic genre, though removing its iconography and paraphernalia, we have in Anadina a mysterious woman with androgynous aspect who says she comes from the future in a mission to know if there was something worthy of rescuing from the past of humanity.

In Yesterday Wonder I Was, there’s an entity that transmutes in the bodies of solitary persons that go across Mexico City in ruins.

Mixing fluently horror (that animated segment with a macabre tone that explains the protagonists’ past), black comedy (that sequence with music by Lucía Méndez!) and the psychological thriller, Nocturno has the strange relationship between a terminally ill man and his new nurse, a grim woman whose presence hides other intentions. 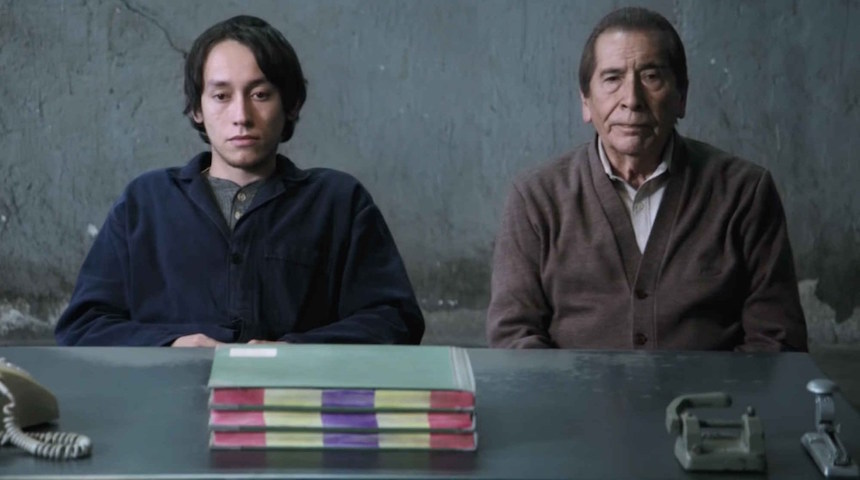 The strange encounter between the old man in charge of a masts storehouse where nothing happens and his substitute, served Jack Zagha Kababie, in his third feature film, to look at those characters that are natural underdogs and that abound anonymously in the city, while touching such subjects as generational clash, the weight of time in our lives and social disenchantment. The perfect movie for a double-feature with Joaquín del Paso’s Maquinaria Panamericana, another comedy with a surrealist hint about that working class without real expectations and stuck in mediocrity. 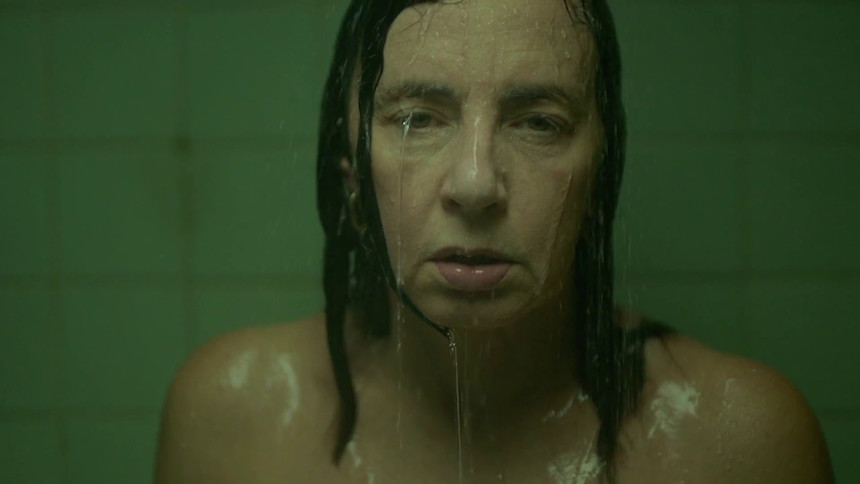 Through his short yet consistent filmography, Marcelino Islas Hernández has written and directed minimalist and mundane portraits, about isolation, frustration, old age and monotony. Here, a car accident that suffers a married couple from some Mexican suburb not only provokes that the man loses a leg, but also manifests a crisis hidden for several years and full of vulgar routines (an anachronistic hit song by Los hermanos Carrión playing insistently, the morning show on TV, the hated picture hanging in the living room…); until the arrival of a young and attractive nurse represents the unattainable fantasy. In 2018, the director is going to release Clases de historia, sure to give much to talk about. 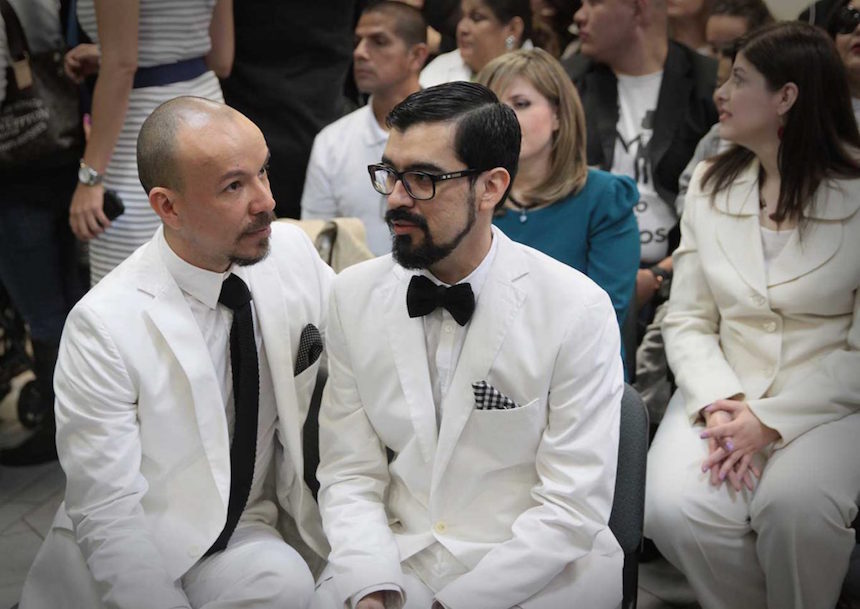 The reiterative and fruitless attempts of a tenacious gay couple to become the first one in getting married in the conservative city of Mexicali, is the activator to portray the side of our society that we systematically deny and that produces heartache: the intolerant, corrupt and hypocrite one. While the journey through the court and pale bureaucratic offices has a conventional narrative (the chronological coverage of the case, the testimonies and the footage obtained from the news), the charisma and determination of the couple makes their story genuinely interesting. 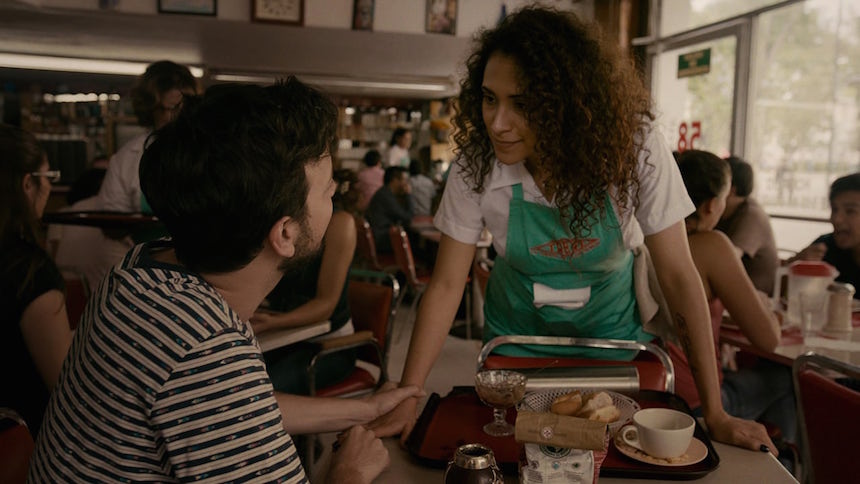 For her second feature length film, Claudia Sainte-Luce once again took an autobiographical passage to tackle such themes as filial relationships, abandonment, sickness and death. However, there’s not much remaining of The Amazing Catfish’s candid and humorous side, since the director rightly opted for a darker and even more personal tone in order to portray the last memories of a man with vascular dementia as well as the distance that have always existed between him and his daughter. It’s worth noting that Sainte-Luce herself is a revelation as an actress. 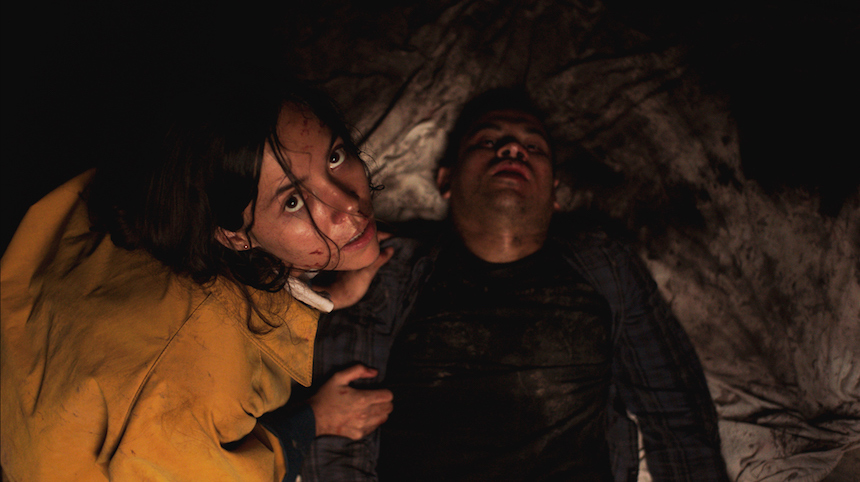 2 - THE UNTAMED by Amat Escalante

Clive Barker’s disturbing stories from the Books of Blood meets Adrián García Bogliano’s Here Comes the Devil, as Amat Escalante continues to talk about a sexist, violent and ignorant country like Mexico, this time inspired by a homophobic crime that occurred in his place of origin, Guanajuato, and that turned into just another statistic. As usual, genre cinema and its metaphors are only an unbeatable vehicle to understand our present and society’s mood. 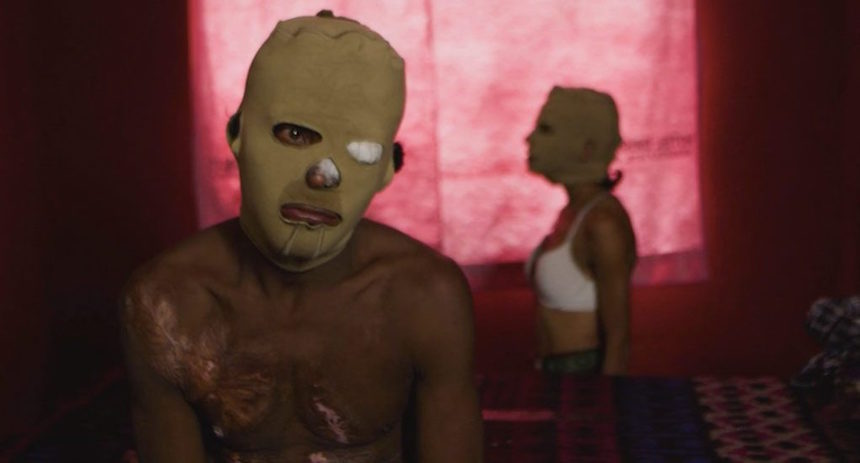 One year ago, thanks to Tatiana Huezo’s Tempestad, we confirmed that evilness can change with time in its form and name, but is always an entity that freely go over roads, rooms, public spaces and any opening. In this occasion, we hear it and see it directly to its eyes. Aside of the stylish decisions that the filmmaker took, avoiding any explicit image, the virtud of this documentary is the way it makes resonate the confessions, the lamentation, the words full of anger, the nightmarish and crazy descriptions, or the voices that have lost already any sort of sensibility. There we have it, the remaining humanity of victims and criminals of the futile Mexican Drug War.

Do you feel this content is inappropriate or infringes upon your rights? Click here to report it, or see our DMCA policy.
almacenadosanadinacharitydevil's freedomla caja vacíaladronas de almaslos truenos de san juanmexican cinemano dress code requirednocturnothe blue yearsthe untamedyesterday wonder i was